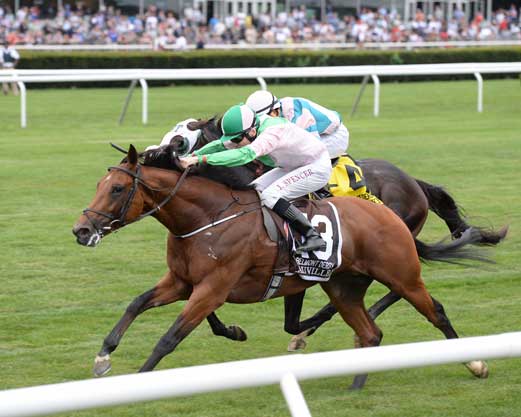 At the risk of being accused of an acute lack of imagination, I'm afraid the topic once again has to be the extraordinary Galileo. How could it be anything else, when the Coolmore champion was responsible for four group/graded winners in the space of three days last week, including top-level winners on both sides of the Atlantic?

It was also a week when Galileo's astonishing son Frankel improved his score to seven winners from nine first-crop runners, with his tally being boosted by Seven Heavens in England and Toulifaut in France. It's worth pointing out that Frankel himself didn't make his debut until Aug. 13, over a distance of a mile, so this spate of early winners surely bodes very well.

Incidentally, one of the other contenders for topic of the week (which also included Acclamation, City Zip, Lord of England and War Front) was Galileo's half-brother Sea The Stars. This Gilltown Stud resident notched up his fifth Group 1 winner from his first three crops when Zelzal took the G1 Prix Jean Prat a day after another son, Mutakayyef, had won the G2 Summer Mile.

It will probably have escaped no-one that Galileo owed his Group 1/Grade I double to Danehill line mares–a cross first made famous by Teofilo and Frankel and more recently by this year's G1 1000 Guineas and Oaks winner Minding. The tough Alice Springs, who deserved her Group 1 success in the Falmouth S. after a series of good international efforts, is out of Danehill Dancer's daughter Aleagueoftheirown. However, it was Danehill himself who sired the dam of Deauville, who proved just too strong for the home defenders in the GI Belmont Derby Invitational S.

I'm guessing that Mrs. Paul Shanahan, the owner of Deauville's dam, was a fan of The Bangles, as she named the filly Walklikeanegyptian, the title of the girl group's 1986 hit. Either that or the filly had an unusual way of moving, reminiscent of the Sand Dance made famous long ago by Wilson, Keppel and Betty (click here to watch). Still, as a name for a horse, Walklikeanegyptian is probably preferable to Walkslikeaduck, though that moniker didn't stop a Blushing John colt of that name winning the GII Del Mar Derby in 2000.

In landing the spoils at Belmont, Deauville became the 12th top-flight winner sired by Galileo from a Danehill mare (his predecessors being Frankel, Teofilo, Intello, Noble Mission, Roderic O'Connor, Cima de Triomphe, Golden Lilac, Maybe, Romantica, Tapestry and Highland Reel). Highland Reel, of course, also enjoyed Grade I success in the U.S., where he won the GI Secretariat S. prior to adding the G1 Longines Hong Kong Vase at the end of last year.

The updated statistics for this exceptionally fruitful cross stand at 26 group winners, from a sample of 240 foals of racing age (a wonderful 10.8%). There are also 12 listed winners, to boost this cross's total of black-type winners to 38, or 15.8%. Naturally, these figures compare very favourably with Galileo's overall record of nearly 6% group/graded winners and 10% black-type winners. These figures don't yet include that high-class colt, 'TDN Rising Star' Idaho, who is still awaiting his first stakes success. However, this game colt has finished third in the G1 Derby and an excellent second in the G1 Irish Derby, to head the ante-post betting for the G1 St Leger.

With 25 2-year-olds due to represent the Galileo-Danehill cross, further success surely awaits. One of them–the listed-winning filly Cuff–has been forced into early retirement, but keep an eye out for the following inmates of the Aidan O'Brien yard–Latin Beat (out of Breeze Hill), Pipes of Peace (Coachella), the 600,000-guinea Air Supremacy (Crystal Valkyrie), Venice Beach (Danedrop), Gold Seal (Nell Gwyn) and Inca Gold (Queen of France). Another of the 25 is Longing, a filly which cost M.V. Magnier 1,000,000gns last year. Then there's Atomique, a sister to the G1 Prix du Jockey-Club winner Intello, and Promise To Be True, a sister to the top 2-year-old Maybe who made a winning debut at the end of June.

There is also a so-far-unnamed brother to Deaville out of Walklikeanegyptian, a mare who has become a constant companion of Galileo. She has produced five consecutive sons to him, the latest being a chestnut colt born on May 21. The first of the five was The Corsican, who has been tackling Group 1 company since his victory in the G3 Dubai Duty Free Legacy Cup last September.

Deauville's second dam, the Rahy mare Ahdaab, was culled by Shadwell for $95,000 in 2000, after being placed over a mile and a quarter in 1999. She produced Walklikeanegyptian, a winner over five furlongs as a 2-year-old, to Danehill in 2003. Danehill must have been a fairly obvious choice, as Ahdaab's half-sister Sabaah had visited him to produce Desert King, winner of the G1 Irish 2000 Guineas and Irish Derby in 1997.

With Danehill dying in 2003, Walklikeanegyptian became a regular visitor to his son Danehill Dancer, producing six consecutive foals, all winners, including two which performed at a high level. Callwood Dancer won the GII Nassau S. in Canada, where she was also second in the GI E.P. Taylor S., while Contredanse won the G2 Oaks d'Italia.

Contredanse is one of the numerous Danehill Dancer mares which have produced foals to Galileo, but her 3-year-old filly Contida is still unraced. As Alice Springs reminds us, other daughters of Danehill Dancer have fared very much better with Galileo. She follows the Classic winners Minding and The Gurkha as this partnership's third Group 1 scorer of 2016, and the Group 3 winner Beacon Rock is another talented representative.

The statistics for this cross stand at 69 foals of racing age, of which 11 have become black-type winners. That equates to nearly 16%, which mirrors Galileo's strike rate with mares by Danehill. What is eye-catching is the fact that nine of the 11 have won at group level, which equals 13%, compared to the 10.8% achieved by the Galileo-Danehill cross.

This is all the more remarkable when Alice Springs, Minding and The Gurkha are the ONLY Northern Hemisphere Group 1 winners that any stallion has sired from Danehill Dancer mares, which–worldwide–have nearly 2,500 foals by stallions other than Galileo (their other Group 1 winner is the Australian gelding Music Magnate, by Written Tycoon).

Alice Springs' dam, the listed-placed Aleagueoftheirown, is another mare who has been virtually “married” to Galileo. Alice Springs is her fourth Galileo foal and fourth winner, and there is also a yearling filly by him. Two of her predecessors were group-placed, with Criteria being good enough to finish a close third in the G2 Ribblesdale S. Criteria was also third in the G2 Park Hill S. over an extended mile and three-quarters, so she clearly wasn't short of stamina. Alice Springs, though, has never been asked to tackle more than a mile during her busy career, no doubt because Aleagueoftheirown did most of her racing over six and seven furlongs, despite having gained her only win over 1 1/16 miles.

One of Alice Springs' best previous efforts was her third to Qemah in Royal Ascot's Coronation S.–a race once won by Golden Opinion, a sister to her second dam Golden Coral. Alice Springs is the second Group 1 winner of 2016 from this female line. Her fourth dam, the Tibaldo mare Loveliest, also ranks as the third dam of My Dream Boat, a shock winner of the G1 Prince of Wales's S. at Royal Ascot.

Loveliest was best known as the dam of Optimistic Lass, a very smart Mr Prospector filly who stayed a mile and a quarter well enough to win the Musidora and Nassau S., before starting favourite for the 1984 Oaks. Although she stayed quite well, Optimistic Lass didn't pass on a lot of stamina to Golden Opinion, even though Golden Opinion's sire, Slew o'Gold, was a Grade I winner at up to a mile and a half. Having won the G1 Coronation S. over a mile, Golden Opinion dropped down to six furlongs to divide Cadeaux Genereux and Danehill in the G1 July Cup.