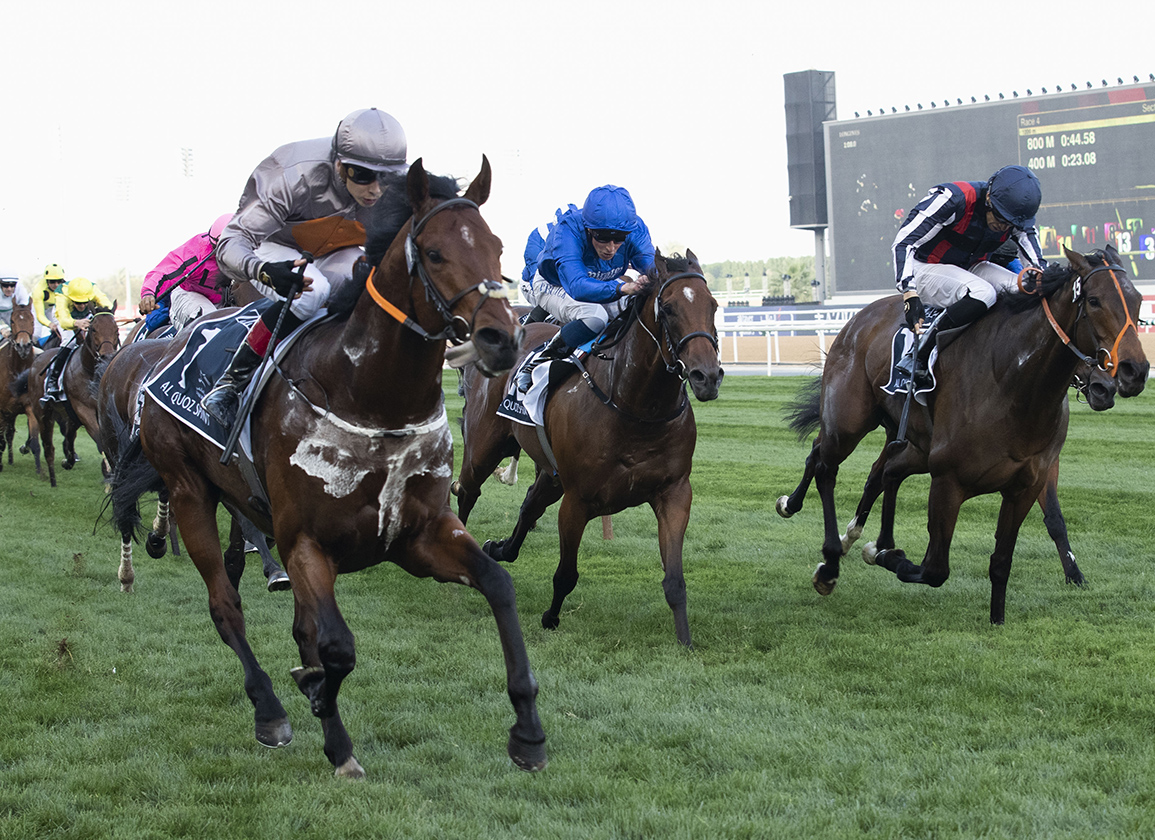 A Case Of You | Dubai Racing Club

Drawn widest of all in the 16-strong G1 Al Quoz field, Gary Devlin's A Case of You (Ire) (Hot Streak {Ire}) gave Ireland a reason to celebrate with an emphatic victory in Meydan's 1200-metre marquee race for turf sprinters. Pinned to the outside rail but in close contention under regular pilot Ronan Whelan in the early going, the 4-year-old forged to the front in the final two furlongs, and found Man of Promise (Into Mischief), who ran on determinedly to his outside, difficult to shake. Undeterred, the entire inched clear of that rival late and was not for catching as British raider Happy Romance (Ire) (Dandy Man {Ire}) gave her best effort, but having to settle for second, beaten 1 1/4 lengths. Favoured Man of Promise finished a neck back in third.

“I was worried I might be getting there a bit early but he was going so well,” said Whelan. “His last furlong is always his strongest and he's such a tough and genuine horse. Five furlongs, six furlongs, soft ground, fast ground, it doesn't matter to him. I love him. He came on so much from the prep run on Super Saturday. Having that experience stood to him and he improved so much from it. It means the world to all the team. To win such a big race at Meydan, it's the stuff you dream of but don't think will happen.”

Happy Romance's jockey Sean Levey added, “She ran a blinder. I thought the draw [post 6] maybe cost me a length and I think she would have been bang there with a better draw. She's run a blinder and the year is young.”

Bred by Derek Iceton at Tara Stud, A Case Of You failed to attract the reserve price of €3,000 at the Goffs Sportsman's Sale as a yearling, and began his career with trainer John McConnell before selling privately to the McGuiness stable after winning the G3 Anglesey S. as a juvenile. In 2021, he won at Dundalk in the spring and later added a score in the G3 Goffs Lacken S. at Naas. Given some time off following a lackluster finish in the G1 Commonwealth Cup at Royal Ascot, he returned to finish third in the G3 Phoenix Sprint S. followed by a runner-up finish in the G1 Derrinstown Stud Flying Five S. in September. Registering a career high win in the G1 Prix de l'Abbaye at ParisLongchamp in October, he was given a crack at the GI Breeders' Cup Turf Sprint at Del Mar the following month, finishing an even fifth. Coming into the Al Quoz, he had to play the bridesmaid to Man of Promise, beaten 4 3/4 lengths in the G3 Nad Al Sheba Sprint Mar. 5.

“I knew he had improved plenty from the [Nad Al Sheba Sprint],” said winning trainer Ado McGuinness. “Ronan Whelan gave him a great ride, he was super cool.”

He added, “Ian Brennan has looked after him [at Meydan] and has done a great job with him. He's a very, very good horse. We might get some credit now! People said it was a weak Abbaye he won, but one thing is for sure, it wasn't a weak race today. He's only four and he'll only get better. I think he'll win another Group 1 this year and the long-term target at the end of the year will be back at the Breeders' Cup.”

Pedigree Notes:
A Case of You is the fifth foal out of Karjera (Ire), a full-sister to MSW Akanti (Ire) and Lock And Key (Ire), Grade III/Group 3-placed in both Ireland and America. The dam of six foals, the 14-year-old Karjera also is responsible for a pair of winners, Loose Chippings (Ire) (Rock of Gibraltar {Ire}) and Knight of Luck (Ire) (Mukhadram {GB}). Her latest produce is Ali Babes (Ire), a 3-year-old filly by Alhebayeb (Ire).