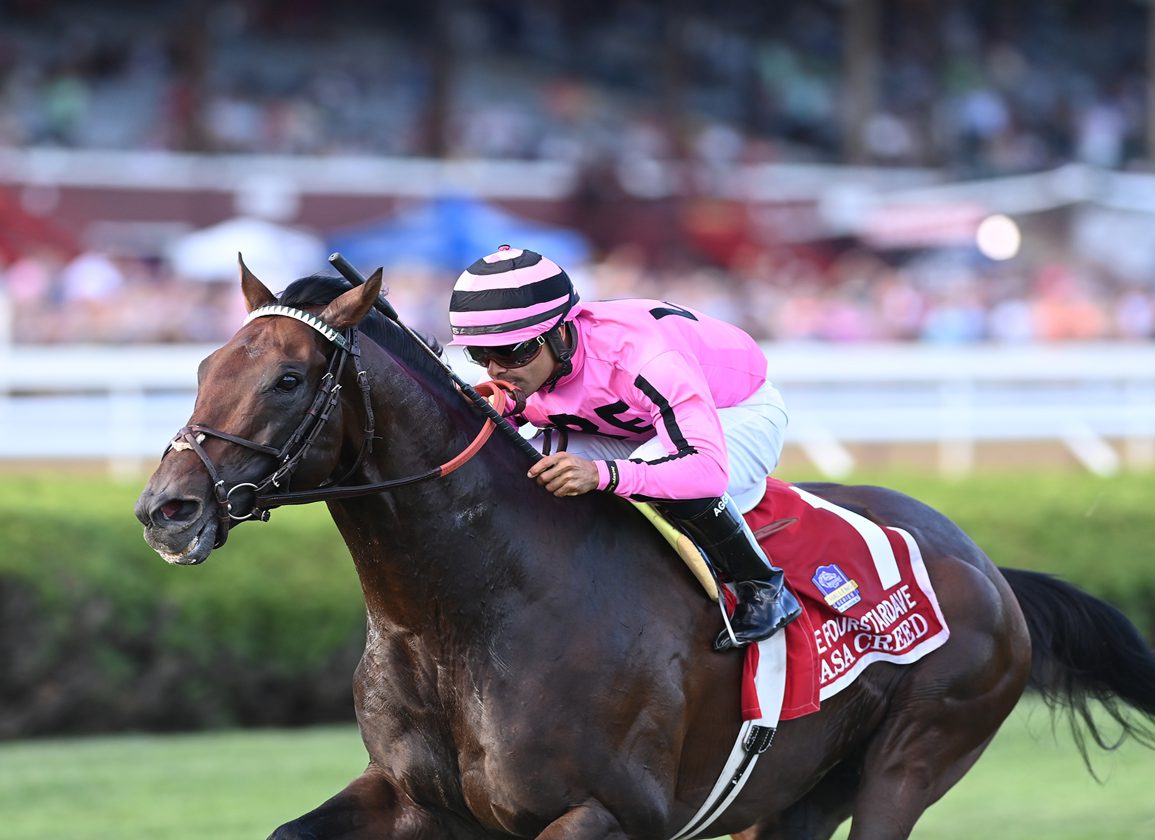 Given a 4-1 chance in this field of five, the rail-drawn Casa Creed dropped back early and trailed in fifth as longshot Get Smokin (Get Stormy) led through fractions of :24.01 and :47.94. Locked and loaded on the far turn, he was tipped out widest of all at the top of the stretch, and, after shifting in around the three-sixteenths marker and getting subsequently corrected by Luis Saez, came flying over the top with massive strides to get the money. Regal Glory, who was attempting to become the third female winner of the race in the last four years, was second best.

A solid third in this race last year, Casa Creed came within a neck of capturing the G3 Turf Sprint Cup in Saudi Arabia in his 2022 lidlifter Feb. 26. Freshened after finishing fifth in the G1 Al Quoz Sprint at Meydan Mar. 26, the bay successfully defended his Jaipur title on the GI Belmont S. undercard last out June 11.

“He's in great form and won two Grade I's since coming back [from Dubai], so scrap that theory that they can't travel and do good,” winning Hall of Fame trainer Bill Mott said. “We've always felt he was capable of going a mile and I think it's a matter of getting his run timed properly and having the right trip, and he did it today. He's run good races at a mile before and got very good speed figures, and today he got his picture taken.”

Where will we see Casa Creed land at the Championships this fall?

“We'll talk about that,” Mott said. “We're already hashing that over, but we'll see. I think six-to-seven [furlongs] is probably his best–he's somewhere in between. But he was drawing away going a mile today. I guess it depends on the trip and how he's doing on the day.”

The lone Grade I scorer and one of four graded winners for the under-appreciated Jimmy Creed, Casa Creed is out of an unraced daughter of four-time graded winner Wild Heart Dancing (Farma Way), the dam of MSPs Unbridled's Heart (Unbridled's Song) and Leopard Rock (Speightstown). Third dam Star of Wicklow was responsible for GISW Man From Wicklow (Turkoman). Achalaya is the dam of Jimmy Creed's 2-year-old half-brother by Distorted Humor, a yearling by Omaha Beach and a filly by Horse of the Year Authentic foaled Apr. 15. She was bred back to Curlin. Bellamy Road is the broodmare sire of two graded winners.