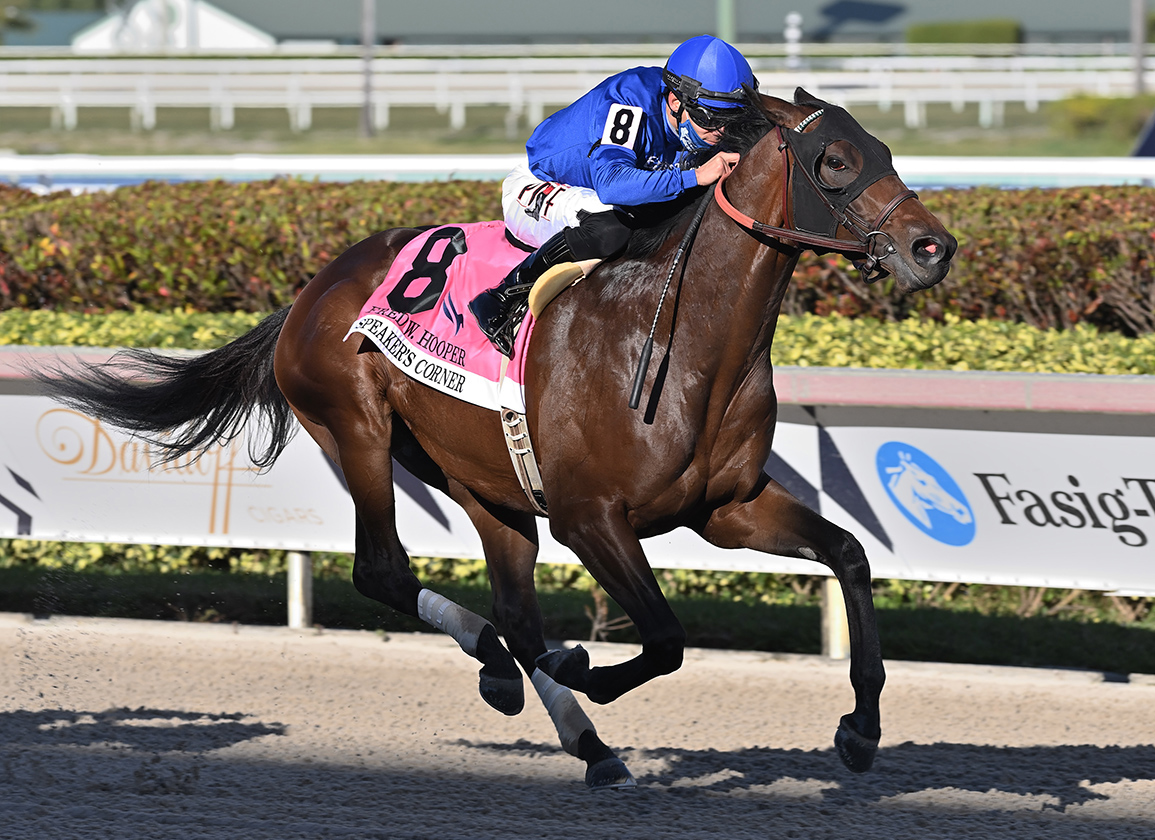 Godolphin's Speaker's Corner (Street Sense) and First Captain (Curlin), owned by West Point Thoroughbreds, Siena Farm, Woodford Racing and celebrity chef Bobby Flay, appear on course for a tilt at the seven-furlong GI Carter H. Apr. 9 at Aqueduct. This term, the former, trained by Bill Mott, has posted a pair of one-turn victories at Gulfstream Park–the GIII Fred Hooper S. Jan. 29 followed by the Mar. 5 GII Gulfstream Park Mile. Last year, he won three starts in New York, including a 6 3/4-length triumph in a Belmont optional claimer in October before finishing runner up in the nine-furlong Discovery S. He also finished a well-beaten sixth in the GI Pennsylvania Derby in September.

“He showed plenty last year,” said Godolphin bloodstock director Michael Banahan. “We tried stretching him out, but it wasn't really what he wanted to do. We got him back out to one-turn miles and he was impressive in both of those. That's what it looks like he wants to do.”

Speaker's Corner breezed four furlongs in :50.80 at Payson Mar. 18. The Godolphin homebred is out of Tyburn Brook (Bernardini), a daughter of 2006 GI Breeders' Cup Distaff winner Round Pond.

“He's a bigger and stronger version of himself,” said Banahan. “Even as a foal and as a yearling, we always liked him on the farm. He's out of an unraced mare but has a very good pedigree. Once he went to Florida to get pre-trained, he showed plenty of talent. When he was sent to Bill, he said the same, so we were always hopeful of him.”

Also gearing up in next month's Carter, First Captain will aim to garner his first win at the top level. Bred by Bobby Flay Thoroughbreds, First Captain made a winning seasonal debut for  Shug McGaughey  in a seven-furlong allowance sprint at Gulfstream Feb. 27. Last season, he reeled off three-straight wins at Belmont, including a 1 3/4-length score in the GIII Dwyer going a one-turn mile at Belmont in July before finishing third in the July 30 nine-furlong Curlin S. at Saratoga.

“He's got that one-turn grinding type of style which, generally, is a tough style to win with at Gulfstream, so we were happy that he ran well,” said West Point Thoroughbreds spokesman Jason Blewitt. “The fact that he got up to win, not that it was a surprise, really felt great. We were proud of him to find the finish with such a closing kick. He bounced out if it in really good shape for Shug.”

Exceptional at the one-turn mile, the Carter will serve as a litmus test of sort to see whether he can win going two turns.

“I'm not totally convinced he doesn't want to go two turns,” said Blewitt. “Although the Curlin was disappointing out of him, it maybe was a case of a bad trip and he did have a minor ankle issue after that,” Blewitt said. “There's no denying that his races at Belmont last spring and summer were mighty impressive as well as the seven-eighths win at Gulfstream. It looks pretty black and white on paper that he's 4-for-4 around one turn, so I'm anxious to see how he'll stack up in the Carter. It's a race that has a very rich history.”

A strong performance from First Captain in the Carter could pave the way to the GI Hill 'N' Dale Metropolitan H. June 11 at Belmont. Vekoma is the most recent horse to capture the Carter-Met Mile double in 2020.