Carrick Springs a Giant Upset in the Secretariat 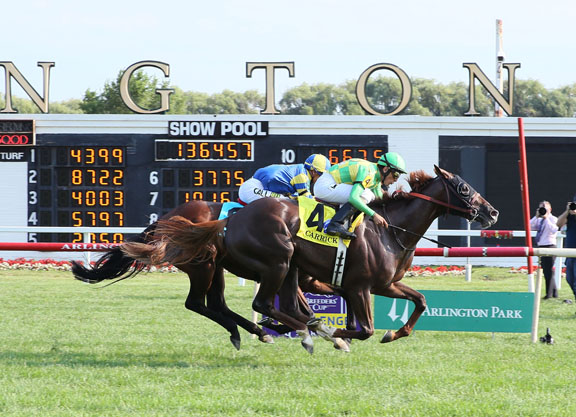 ARLINGTON HEIGHTS, Illinois–Summarily dismissed at odds of 37-1, Carrick (Giant's Causeway) sat a trip slightly better than midfield and outkicked heavily favored 'TDN Rising Star' Analyze It (Point of Entry) to give the Donegal Racing partnership headed up by Jerry Crawford a second win in the race, following on the success of Paddy O'Prado (El Prado {Ire}) in 2010. Bandua (The Factor) saved ground throughout and held for third.

Drawn gate four with Hall of Famer John Velazquez at the controls for the second time, the chestnut fell into a good spot early behind a robust early pace set, not unexpectedly, by GIII American Derby hero Real Story (Fast Bullet). He was tracked along by Ballydoyle's GI Belmont Derby third Hunting Horn (Ire) (Camelot {GB}) as Analyze It settled in the clear with Carrick on his tail. The pace remained very much on over ground with a decent amount of ease in it, with positions largely unchanged as the field emerged from behind the infield trees. Hunting Horn was one of the first beaten fully 2 1/2 furlongs from home and Analyze It appeared ready to pounce, striking the lead at the quarter pole. But Velazquez had the move covered, shifted off that one's heels and showed the superior final-furlong kick for a somewhat improbable success.

The final time of 2:01.04 compared favorably to the 2:02.29 older horses took to run the GI Arlington Million two races later.

“He broke well and going past the wire for the first time he settled really well,” said Velazquez, winning the Secretariat for the first since guiding Awad (Caveat) 25 years ago. “By the backstretch I was in a perfect position and I was very happy with the way he was doing things. After that, really, I was just waiting for the stretch run to see how he would respond for me and he responded, and he responded right away.”

Risked for less than his $75,000 purchase price on debut, Carrick drilled $40,000 maiden taggers by 4 1/2 lengths at Belmont May 12 and was given an easy first start against winners in a $50,000 starter allowance. He comfortably defeated a pair of next-out scorers going nine panels in Elmont June 21 and was a 13-5 chance in the GIII Kent S. at Delaware July 14. He turned in a mostly even effort, good enough for third despite racing greenly, but connections took the leap of faith Saturday, one which paid off richly.

Carrick is the 184th black-type winner, 108th group/graded winner and 32nd top-level winner for his recently departed stallion. While his second dam lacks any black-type, third dam Gone To Venus produced MGSW Saudi Poetry (Storm Cat) and was a half-sister to GSW Rokeby Rose (Tom Rolfe), the dam of two-time Eclipse Award winner Silverbulletday (Silver Deputy). How Far To Heaven is responsible for the 2-year-old colt Zozo (Union Rags) and produced a filly by Sky Mesa this year. The mare was most recently bred to Constitution.