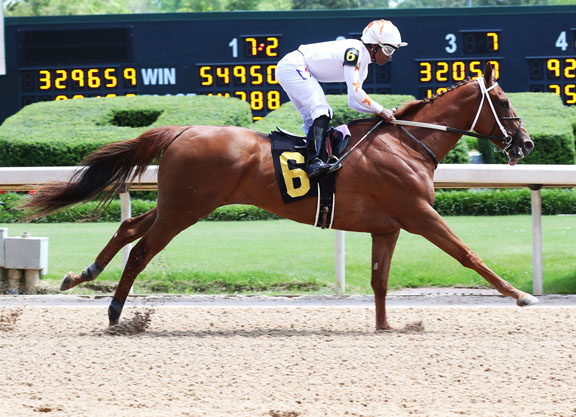 Scolding (f, 3, Carpe Diem–Rebuke, by Carson City), a $475,000 OBSAPR breezer (:20 3/5), lived up to the billing with a ‘TDN Rising Star’ performance on debut on the GI Arkansas Derby undercard at Oaklawn Park.

The even-money favorite broke well from her five draw and secured a perfect spot to sit a pressing second from the outside through an opening quarter in :21.77.

Under a snug hold approaching the quarter pole with Ricardo Santana Jr. taking a look around for the competition, Scolding gained command without being asked, turned for home in complete command and leveled out nicely in the stretch to score by a geared-down six lengths.

Rebuke, a four-time winner carrying the colors of Andrew Rosen and a half-sister to multiple stakes winner Summer Cruise (Vicard) and English Group 1-placed Rebuttal (Mr. Greeley), is also represented by Constitution fillies of 2018 and 2019. She had a filly by Anchor Down this spring.

Scolding was the second-most expensive of 30 juveniles from the first crop of Carpe Diem to change hands in 2019. She was pinhooked by Bob Verratti’s Charlestown Investments, which also had bought back eventual GSW Independence Hall (Constitution) at Fasig-Tipton Gulfstream the month prior.