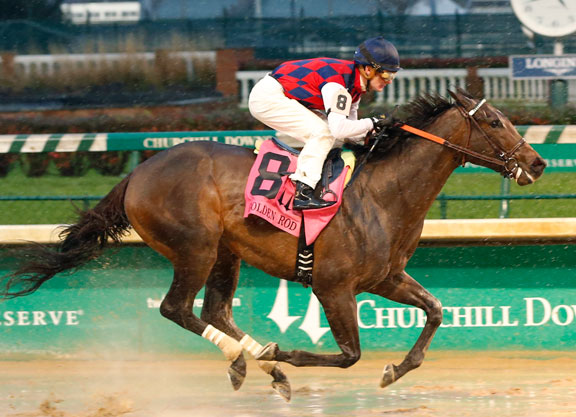 An already loaded 3-year-old filly division is about to get even deeper.

Three Chimneys Farm’s Carina Mia (Malibu Moon), a dominating heroine of the GII Golden Rod S. when last seen making her two-turn debut at Churchill Downs Nov. 28 (video), has returned to the worktab at Payson Park with a bullet three-furlong move in :37 (1/10) Jan. 25 and a four-furlong breeze in :51.80 (27/28) Feb. 1. The GII Davona Dale S. going a mile in Hallandale Feb. 27 is a “possible target” for the ‘TDN Rising Star’s’ sophomore debut, according to Three Chimneys Vice Chairman Doug Cauthen.

“She’s had two solid works and [trainer] Bill [Mott] seems happy with her,” said Cauthen, who is also the principal of Doug Cauthen Thoroughbred Management LLC. “He’s been contemplating maybe making the Davona Dale with her. She’s run well at Keeneland too, so that’s an option for her as well if everybody is fortunate enough to get that far along. She’s filled out nicely and has always been a pretty filly. So far, so good.”

Carina Mia, second in her debut behind Stageplay (Curlin) at Keeneland Oct. 10, romped by 9 3/4 lengths in her maiden breaker at second asking going 6 1/2 furlongs in Lexington Oct. 29, good for a gaudy 97 Beyer Speed Figure. She turned the tables on the aforementioned Mike G. Rutherford homebred in wire-to-wire fashion by 4 1/4 lengths in a sloppy renewal of the Golden Rod. Stageplay, of course, recently resurfaced with a smart tally in the Silverbulletday S. at Fair Grounds Jan. 16.

“She showed that she has tons of talent and hopefully she’ll make the transition from two to three,” Cauthen continued. “I know Steve Asmussen thinks very highly of his filly [Stageplay]. The 3-year-old fillies are really good this year. From the new filly Cathryn Sophia to obviously the proven runners we’ve already seen last year, it’s a heck of a group and Carina Mia certainly deserves to be in the discussion.”

Dubai Sky (Candy Ride {Arg}), meanwhile, campaigned in partnership by Three Chimneys Farm and Besilu Stables, is back in training at WinStar Farm and should breeze for the first time in a couple of weeks. Dubai Sky emerged from a win in the GIII Spiral S. at Turfway Mar. 21, his fourth straight decision, with a cannon bone fracture.

“It’s kind of premature [to discuss targets for his return], but he looks great and is moving great and thankfully, he’s doing well,” Cauthen concluded. “Hopefully, he’ll get back to Bill [Mott] and be running in some of the significant races later this summer.”