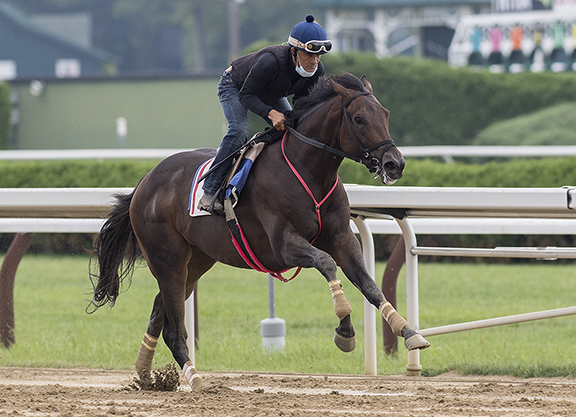 'TDN Rising Star' Caracaro (Uncle Mo–Peace Time, by War Front) has been retired from racing and will take up stud duties in 2021 at Pope McLean's Crestwood Farm for a fee of $6,500 LFSN. Campaigned by Global Thoroughbred and Top Racing LLC and conditioned by Gustavo Delgado, the bay was a six-length second-out winner at Gulfstream in January. He was second by a neck in Saratoga's GIII Peter Pan S. in July, and completed the exacta in the GI Runhappy Travers S. Aug. 8 while earning a 101 Beyer Speed Figure.

“We are excited to stand Caracaro, a quality Grade I performing son of Uncle Mo, who is proving himself to be a sire of sires,” said Pope McLean Sr. “Three of the top four freshman sires by earnings are sons of Uncle Mo. Caracaro was dominant breaking his maiden at Gulfstream Park and was labeled a 'TDN Rising Star'. He followed that up with a pair of runner-up finishes at Saratoga in the GIII Peter Pan and $1-million Travers. Caracaro has a lot to offer breeders as a Grade I performer by Uncle Mo, out of a War Front mare.”