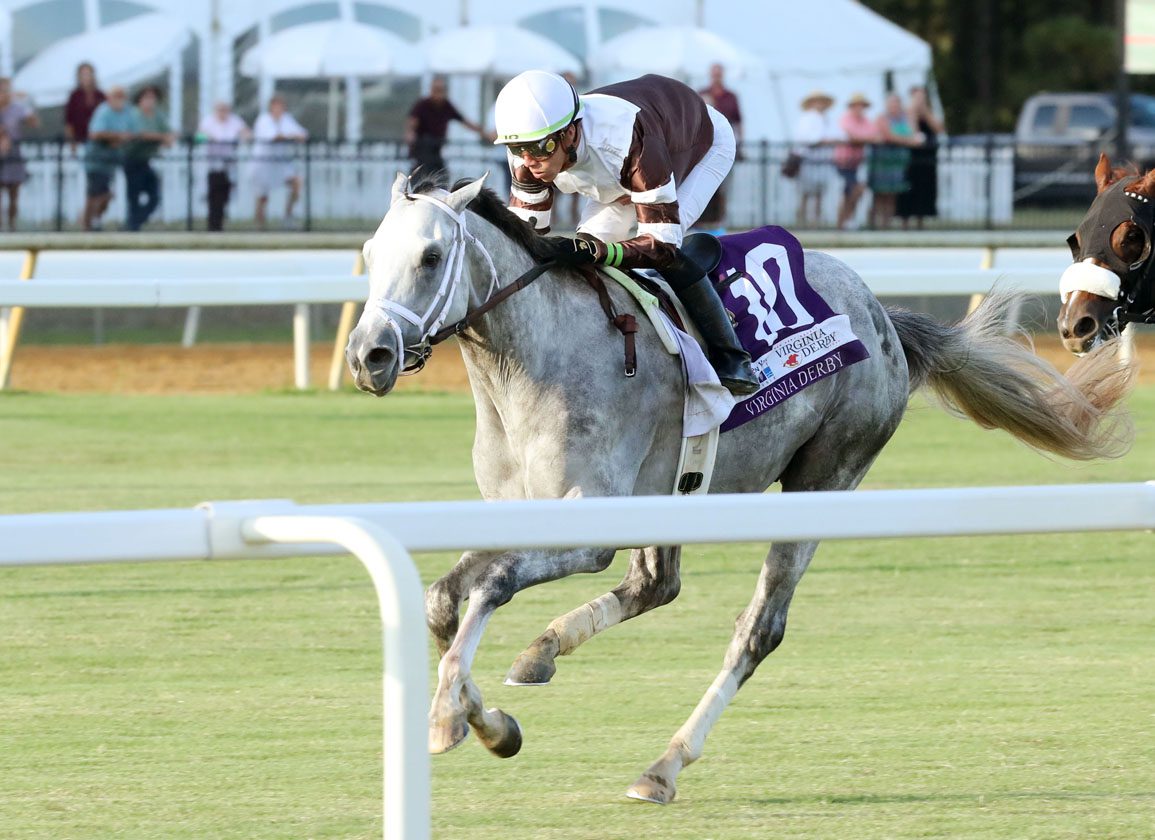 On paper, Eclipse Thoroughbred Partners, Robert LaPenta and Gainesway Stable's Capensis (Tapit), a $2-million Keeneland September yearling purchase and impressive debut winner at Belmont early this summer, was the most lightly-raced yet still appeared to be among the top contenders in Colonial's GIII New Kent County Virginia Derby Tuesday evening. Backed down to 8-5 favoritism while stepping up to graded company following a sixth in a Saratoga allowance July 30, the flashy grey swept from off the pace late, and despite running greenly in the stretch, took home the lion's share of the $300,000 pot. Breaking evenly from post 10, the Todd Pletcher trainee was content to be settle back early as Vance Scholars (Holy Boss) went to the front with dual British Group 2 winner Royal Patronage (Fr) (Wootton Bassett {GB}), Catnip (Kitten's Joy) and GII Penn Mile victor Wow Whata Summer (Summer Front) all within three lengths of a moderate pace. While Joel Rosario tried to contain the headstrong Royal Patronage through a :23.24 quarter, Irad Ortiz Jr. found a much easier time of it as his mount Capensis lingered in sixth as the pacesetter carved out a :47.62 half. With three furlongs left to run, the leading rank began to constrict as Capensis began to pick up the tempo, picking off rivals heading to the quarter pole. In the meantime,  leaders Catnip and Royal Patronage battled for supremacy, and while the former gained a slight advantage straightening for home, the steely grey swept out wide turning for home and loomed large down the center of the track. Despite veering in sharply, and then reacting to a left-handed whip to drift outward in the stretch, Capensis proved he was clearly the best of the rest, crossing the wire 2 1/2 lengths over California Frolic (California Chrome) with Limited Liability (Kitten's Joy) getting up for third.

Capensis was sent off at what now appears to be an overlay at 5-1 in his debut going 1 1/16-miles at Belmont July 2 and quickly showed his class, rolling home an emphatic five-length winner over next out winners Running Bee (English Channel) and Sosua Summer (Summer Front). Rightly bet down to even-money favoritism in his latest start at the Spa, he faced some obstacles but still managed to finish a close-up sixth.

With his Virginia Derby victory, Capensis becomes the 155th black-type winner and 97th graded winner for Gainesway's leading sire Tapit. The bottom side of the colt's pedigree is no less impressive with 'TDN Rising Star' Tara's Tango (Unbridled's Song), a three-time graded winner including the GI Santa Margarita S. A half-sister to GISW Visionaire (Grand Slam), GSW & MGISP Scarlet Strike (Smart Strike) and GSW Madison's Luna (Tapit), the winner's dam has a juvenile colt by Curlin and a yearling by Quality Road.

Campaigned by her breeder Stonestreet Stables, Tara's Tango hit paydirt quickly as a broodmare when her first foal, a colt by Medaglia d'Oro, brought $2.15 million at Keeneland September in 2019. The following season, Eaton Sales consigned Capensis, who topped the covid-impacted 2020 renewal of the Keeneland September sale.