Candy Ride's White Frost Much the Best in Sweetest Chant 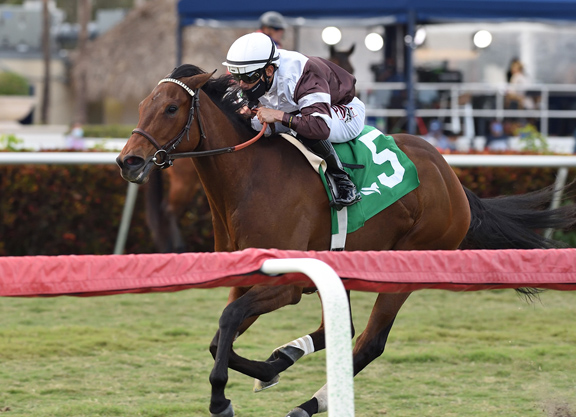 Let go at a tempting 9-2, Gainesway Stables' homebred White Frost spent a good portion of Saturday's GIII Sweetest Chant S. hemmed away at the inside, but she saved her best for last, as she sprinted past pacesetting favorite Con Lima in the final furlong for a breakthrough graded stakes success.

Con Lima, exiting a front-running defeat of Honey Pants (Cairo Prince) in the course-and-distance Ginger Brew S. Jan. 2, hit the ground running and had things very much her own way on the engine, as White Frost settled three back on the fence with about five lengths to find down the backstretch. Racing tightly just to the inside of Tampa maiden winner Domain Expertise (Kitten's Joy) as they hit the half-mile pole, White Frost was full of run, as Junior Alvarado mulled over his options. Held together into the stretch, White Frost was asked to kick leaving the three-sixteenths and it was a telling burst, as she beat Domain Expertise to the punch and reeled in Con Lima with her powerful, long strides.

A distant debut fourth to Zainalarab (War Front) sprinting on the Belmont main track Sept. 18, White Frost improved a couple of spots to finish runner-up in a muddy main-track maiden in Elmont on Halloween. Switched to the turf and two turns for her latest, the dark bay worked out a box-seat trip and went on to best recent Fair Grounds maiden winner Lijana (Hard Spun) by 1 1/4 lengths.

The 95th stakes winner and 48th graded winner for Candy Ride, White Frost is the second black-type performer for her dam, a dual stakes winner on the New York circuit in the early 2010s for Dogwood Stable and acquired by Gainesway for $170,000 at the 2015 Fasig-Tipton November Sale. White Frost's third dam was a Grade I winner on turf at nine furlongs for Allen Paulson and Marty Wygod and was a full-sister to Paulson's top turf horse Hap. Their dam, multiple French champion Committed (Hagley), is also the second dam of top turf sire English Channel (Smart Strike). Winter Frost also carries the cross over Storm Cat-line first or second dams that has been responsible for some of Candy Ride's top horses, including Horse of the Year Gun Runner, champion Shared Belief and other Grade I winners Sidney's Candy, Evita Argentina and Mastery, among others. Miss Frost is the dam of a 2-year-old colt by Union Rags, a yearling colt by the late Empire Maker and was most recently bred to Frosted.