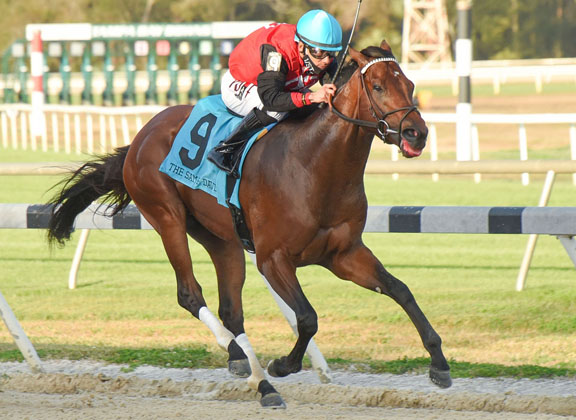 The Sam F. Davis carries 10-4-2-1 qualifying points on the Road to the GI Kentucky Derby.

The 3-1 second-choice forced the issue on the outside through fractions of :23.35 and :46.94 after exiting from post nine, and made his move to strike the front at the top of the stretch as Nova Rags began to sneak through an opening on the inside with a run of this own.

Candy Man Rocket was always going the better of the two, however. He enjoyed a 2 1/2-length advantage at the stretch call, and kept on finding down the lane to get the money.

Favored Known Agenda (Curlin), exiting a well-beaten third over sloppy going in the GII Remsen S. Dec. 5 and some very live maiden races last term for Todd Pletcher, got going too late from far back to finish fifth.

“He got into a real nice comfort zone down the backside and Junior let him out a notch going to the three-eighths pole, and at that point, there wasn't a whole lot coming from behind. He hit the front a little bit early, which was concerning–he's still inexperienced and sometimes when they get to the front too early, they tend to wander. Junior kept him to the task and he really ran on well and passed the two-turn test.”

As for what's next for the top two, Riley Mott added, “We have to see how the horses come back. Nova Rags has had two races in three weeks, and to bring him back in four [for the GII Lambholm South Tampa Bay Derby], we just have to look at the calendar and see what the options are. As far as Candy Man Rocket, he went over the track today, but we have to see how they come back.”

The Arkansas-based businessman also campaigns the MGSW & MGISP 'TDN Rising Star' homebred Frank's Rockette (Into Mischief), a winner in her 2021 comebacker in the American Beauty S. at Oaklawn last month.

It's been a long time since a leading sire list didn't include Candy Ride (Arg), who acquired his 49th graded winner and 96th black-type winner with Candy Man Rocket's first stakes score Saturday. Out of the Forestry mare Kenny Lane, Candy Man Rocket's third dam is a half-sister to champion Althea (Alydar), making Broodmare of the Year Courtly Dee (Never Bend) his fourth dam. The dynasty established by Courtly Dee included top sires Arch (Kris S.) and Green Desert (Danzig), as well as more recent stars like champion Covfefe (Into Mischief) and Breeders' Cup winner Bayern (Offlee Wild). Kenny Lane produced the colt Notacry (Orb) in 2019, who sold for $10,000 at Keeneland January in 2020, and a filly by Tonalist in 2020. She was bred back to Tonalist again for this spring. Kenny Lane brought $55,000 from Robert S. Evans in foal to Quality Road at the 2016 Keeneland November Sale.