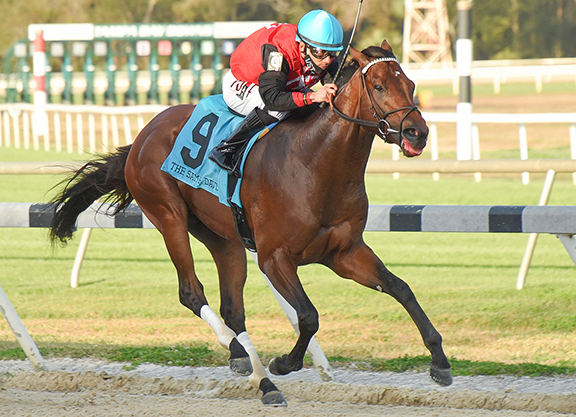 After recording a stalk-and-pounce victory in the GIII Sam F. Davis S. Feb. 6, Candy Man Rocket (Candy Ride {Arg}) will have 11 rivals standing in his way to double up in Saturday's GII Lambholm South Tampa Bay Derby. The Tampa Bay Derby carries 50-20-10-5 qualifying points on the road to the GI Kentucky Derby.

Candy Man Rocket, the 2-1 morning-line favorite for the Tampa Bay Derby, worked a bullet four furlongs in :48 3/5 (1/36) at Payson Park Feb. 28. He is drawn in post three with Junior Alvarado aboard.

“The [Tampa Bay Derby] has been on our minds since he won the Sam F. Davis,” Hall of Fame trainer Bill Mott said. “Any time you get a horse that runs well over that racetrack, you have to give it consideration.”

He continued, “It seems like he is doing equally as well now as he was before the Davis. He's got good natural speed away from the gate, which can always be an advantage for any horse, position-wise. The chances of getting a good trip might be better than they would for a deep closer, especially in a big field.”

After completing his juvenile campaign with two straight route wins in Kentucky, Hidden Stash (Constitution) rallied smartly from eighth after a ground-saving trip to finish third–beaten just 1 1/4 lengths–while making his stakes debut in the Sam Davis. The addition of more speed types in this full field should certainly play in his favor.

Helium (Ironicus) tries dirt for the first time in his sophomore debut. He was perfect from two tries for Mark Casse going seven furlongs over the Woodbine synthetic last term, most recently dominating six rivals in the Display S. Oct. 18.

Promise Keeper (Constitution), a well-beaten fourth behind Candy Man Rocket sprinting on debut, stretched to a mile with a sharp, front-running maiden victory for Todd Pletcher in the Gulfstream slop Feb. 6. He will have to work out a trip in his two-turn debut from post 11. Pletcher has won the Tampa Bay Derby a record five times and will also tighten the girth on Unbridled Honor (Honor Code), who took a big step forward to annex a local two-turn maiden special weight at third asking Feb. 6.

Super Strong (Super Saver), winner of the Classico Agustin Mercado Revron S. first out in Puerto Rico Dec. 19, shows up in this ambitious spot for his U.S. debut. He worked a bullet five furlongs for trainer Saffie Joseph, Jr. in :59 3/5 (1/30) at Palm Meadows Feb. 13.

“He has trained well enough to give it a shot,” said Joseph, who will also saddle longshots Awesome Gerry (Liam's Map) and Moonlite Strike (Liam's Map). “It's hard to judge his form in Puerto Rico, but he acts like the distance will be no problem. We aren't giving up much experience to most of the other horses in the race. We definitely would like him to have another race in him, but we have to play the hand we're dealt.”