Canadian Star Pink Lloyd to be Retired After Kennedy Road 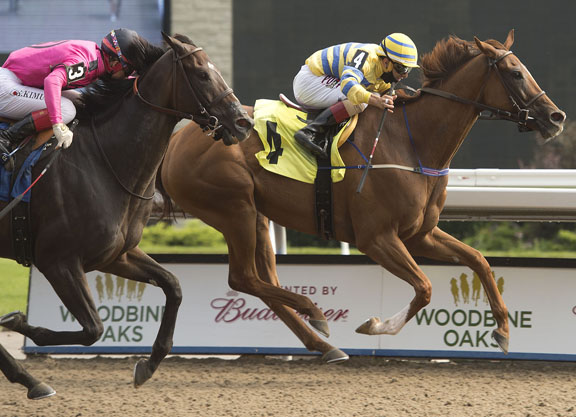 “He's getting old, like me,” Tiller said. “What does he have to prove? I just don't want to put him out there against the very best anymore. He deserves to be retired. He was never going to go out there and run in $20,000 claimers. The decision has been made and we will stick to it. It's been a great run.”

Win or lose Saturday, Pink Lloyd has put together one of the more remarkable careers in the history of Canadian racing. He goes into the Kennedy Road, a race he won in 2017 and 2019, with 28 career victories from 37 starts and 25 stakes wins. All of his races have been at Woodbine. When converted to U.S. dollars, his career earnings stand at $1,786,083.

“He's the angel from heaven,” Tiller said. “He's the Muhammad Ali of all the horses I've trained over the years and I've been doing this for 48 years here at Woodbine. He's the man. He's the king. Anytime you find another horse who has won 25 stakes and 28 times you let me know about it.”

Pink Lloyd was purchased for $30,000 at the 2013 Canadian Thoroughbred Horse Society yearling sale by owner Frank Di Giulio, Jr. He didn't make his first start until his 4-year-old year. He went three-for-five that year, but the best was yet to come. At five, he went eight-for-eight in 2017 and was named Canadian Horse of the Year.

Tiller campaigned him carefully. He never ran on the turf, outside of Canada or in any races longer than seven furlongs. The reward was more than five years of sustained excellence. He was named the champion male sprinter in Canada every year from 2017 through 2020. He was also named champion older horse in 2017 and champion older dirt male in 2019.

“I'll tell you what makes him so great–heart and desire and liking what he's doing and wanting to win,” Tiller said. “He goes after horses and he did that from day one. On day one, we put a horse three-four lengths in front of him and he'd blow by them by the time he hit the turns. He always wanted to do it.”

Following his last race, Pink Lloyd will be sent to the LongRun Thoroughbred Retirement Society in nearby Hillsburgh, Ontario.

“I have so much respect for this animal” Tiller said. “I say that truthfully. I have tremendous respect and love for this animal and we don't want to do anything that would make him look bad.”

Pink Lloyd is being retired at a point where he is still competing at a high level. He's two-for-four on the year and is coming off back-to-back wins in the GIII Bold Venture S. and the Ontario Jockey Club S. But he may not have been at his best in the Ontario Jockey Club, where he had to fight to win by a neck as the odds-on favorite.

Since the Kennedy Road is for open company, it figures to be a tough race for the 9-year-old. While Tiller would like to see him go out with a win, he said there are more important things than one more victory.

“I'm looking forward to this race, but it's not a matter of life and death,” he said. “He's been beaten before for different reasons. Every great horse gets beat. At end of the day, it's more important for him to come back from the race safe and sound.”