Canadian HOTY Title Likely To Be Decided Saturday at Woodbine 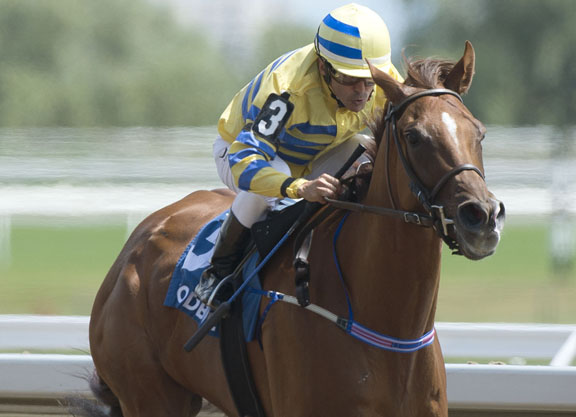 While the U.S. Horse of the Year race was all but decided when Authentic (Into Mischief) won the GI Breeders' Cup Classic Nov. 7, the race for the Canadian title remains wide open entering a Saturday card at Woodbine that will feature the four top contenders for the year-end honor.

The sentimental favorite is the 8-year-old Pink Lloyd (Old Forester), but he will face one of the toughest tests in his career when he goes in the GII Kennedy Road S. A loss could open the door for 3-year-olds Belichick (Lemon Drop Kid) and Mighty Heart (Dramedy), who, combined, swept the Canadian Triple Crown races for trainer Josie Carroll.

Starship Jubilee (Indy Wind), who beat males in the GI Woodbine Mile, may be the best horse who was based at Woodbine this year, but she is not eligible for the Sovereign Awards because she hasn't met the minimum requirement of having three starts in Canada this year.

The Kennedy Road will be the last start this year for Pink Lloyd, who, at age 8, hasn't slowed down. He is 4-for-4 on the year and remains one of the most popular horses in recent years in Canada.

“At his age, 99% of the horses take a step back,” said trainer Bob Tiller. “There are horses running in $8,000 claimers that he ran against as a 4-year-old. That he's still at that level at this age is unbelievable. He's from outer space. He loves running and is just a very happy horse.”

Pink Lloyd is 26 for 31 lifetime and has not lost a race since 2018, but rarely has he faced the type of field that will line up against him in the six-furlong Kennedy Road. The biggest threat may come from Ride a Comet (Candy Ride {Arg}). Trained by Mark Casse and the winner of the 2018 GII Del Mar Derby, he returned after a 25-month layoff to win a Woodbine allowance Oct. 16.

“Ride a Comet is an extremely, extremely talented horse,” Casse said. “I was very impressed with his first race in over two years. I thought it was a tremendous race. He won with ease. This race is a little shorter than he prefers, but we've got to give him a shot. He's had a couple of injuries along the way, but he's very healthy now. If he can stay healthy, he will be a horse to be reckoned with throughout North America, not just Woodbine, in 2021.”

Silent Poet (Silent Name {Jpn}) is another Kennedy Road starter who could easily spring the upset. He is 4-for-5 on the year and has won the GII Nearctic S. and the GII Connaught Cup, but has little experience on a synthetic surface. Should he win the Kennedy Road, he may also be in the mix for Horse of the Year.

“This is certainly one of the toughest fields our horse has ever faced,” Tiller said. “There have been two or three other times where it looked like he might be in trouble and he got it done. But this is a tough race, a salty race. There's no question about that. There are two very good horse in there that he has to beat. (Silent Poet) is a very, very good horse. He's done all his winning on the turf, but ran respectfully on (Tapeta) when he tried it and I think he's a better horse now than he was then. I totally respect him. The race for (Ride a Comet) the other day was awesome. I very much respect him.”

Mighty Heart, a one-eyed horse, won the first two legs of the Canadian Triple Crown, the Queens Plate S. and the Prince of Wales S. only to come up well short in the final leg, the Breeders' S. on the grass. He finished seventh that day, beaten 20 1/4 lengths after getting hooked up in an early pace battle with a 101-1 shot. Carroll has since replaced jockey Daisuke Fukumoto with Woodbine's second leading rider, Rafael Hernandez. That may help and so, too, could the return to the Tapeta surface. Mighty Heart has run poorly in his two career tries on the grass.

But the Breeders' S. was not a lost race for Carroll, who won it with the rapidly improving Belichick. Still a maiden entering the 12-furlong race, he won by four lengths. The main question for him Saturday will be the turn back in distance to a mile-and-an eighth for the GIII Ontario Derby.

Both Mighty Heart and Belichick will be facing open company after going through the Canadian Triple Crown races, which are restricted to Canadian-breds.

“It's a pretty tough race,” Carroll said. “It's not just the two of them. There are some pretty nice horses in there and it's a solid race. Both of my horses came out of their last race in really good order so there was no reason not to go on with them.”

The main threats include Field Pass (Lemon Drop Kid), a Mike Maker-trained horse who won the GIII Jeff Ruby Steaks S. in his lone try on a synthetic surface and has since won the GIII Transylvania S. Casse will be represented by Lucky Curlin (Curlin), who is coming off a second-place finish in the Toronto Cup S.

“When it comes to Horse of the Year, there are some deserving horses,” Carroll said. “If Mighty Heart were to win this race after winning the two Triple Crown races, I think he'd be a pretty legitimate contender. If Belichick wins, I am not sure the voters would think he had accomplished enough. We'll see.”

Pink Lloyd was named Canadian Horse of the Year in 2017. Last year, despite going 6-for-6, he was nosed out by Starship Jubilee.

No horse older than six has ever been named Horse of the Year in Canada and if it's going to happen this year Pink Lloyd will have to turn in one of the best races of his career on Saturday.

“It's always a tough vote,” Tiller said. “They are all good horses. What happens here this week will decide a lot. Our horse is undefeated as an 8-year-old and is an unbelievably special horse. But I always feel that you have to respect any horse that does great things. Mighty Heart is a very good horse. He certainly deserves to win it. We have to go out there on Saturday and do it. I am very confident that he will run a huge race.”