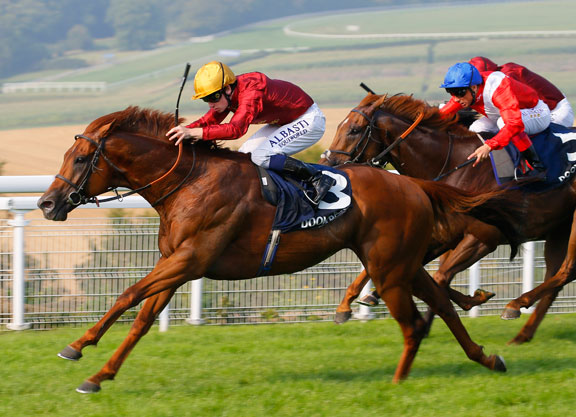 First and second in Goodwood’s G2 Grosvenor Sport Celebration Mile 12 months ago, Lightning Spear (GB) (Pivotal {GB}) and Zonderland (GB) (Dutch Art {GB}) are back for the rematch on Saturday, with the former holding a distinct fitness edge. Since his success in this, Qatar Racing’s representative has shown he belongs in a higher strata when third in Ascot’s G1 Queen Elizabeth II S. in October, runner-up in the G1 Lockinge S. at Newbury on May 20 and third in the rain-blighted G1 Sussex S. at Goodwood on Aug. 2. Cheveley Park Stud’s Zonderland is out for the first time since his 1 3/4-length defeat by Lightning Spear here and trainer Clive Cox is just glad to see him back in action. “Zonderland is training well and I am very much looking forward to seeing him run,” he said. “I hope conditions continue to dry out for him, but I have been pleased with his work. Obviously he ran very well in this race last year. It’s just taken us time to get him right as he had a hold-up in the spring. Unfortunately, the ground was far too soft in the Sussex S. at the Glorious meeting. He has always been an impressive individual from his 2-year-old days and he’s a big-framed horse. Although he has been off the track for a long time he is a bigger, stronger horse. He ran well in the race last year and the form has worked out especially well, so it’s proved he is a top-class performer.”

Al Shaqab Racing’s Hathal (Speightstown) reverts to a mile after a latest third in the G2 York S. on July 29, having finished third behind stable companion Mutakayyef (GB) (Sea the Stars {Ire}) in the G2 Summer Mile at Ascot a fortnight previously, but connections are watching the weather. “Hathal is in very good form, but he loves it soft,” racing manager Harry Herbert commented. “If it is anything quicker than good he will probably not run, but that decision will be up to William [Haggas]. It is always frustrating with him, as he must have it on the easy side. He is a good horse and he ran well at York last time and it looks the right race over a mile for him.”