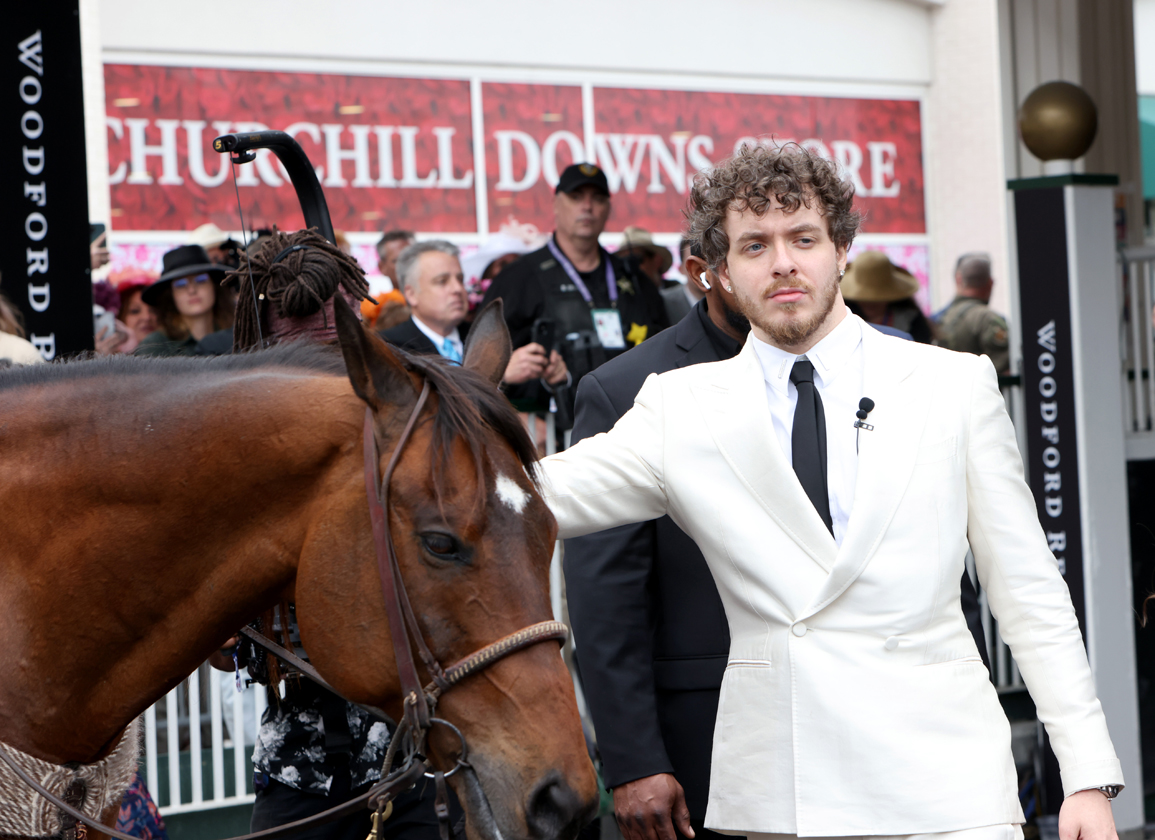 Jack Harlow, one of the most popular up-and-coming rappers in America, was in the spotlight at Churchill Downs when the 24-year-old delivered the 'Riders Up' call for this year's Kentucky Derby. The Louisville native made his visit to the races an all-day event by filming a music video for his new song entitled 'Churchill Downs.'

Named a top new artist at last year's Billboard Music Awards, Harlow's popularity has skyrocketed this year after the release of his album Come Home The Kids Miss You, which includes his No. 1 hit 'First Class.'

The 'Churchill Downs' music video was released on June 1 and instantly became a viral sensation. Performing from a glass enclosure in the infield, Harlow is joined by fellow rapper and pop culture figure Drake, who is featured in the song.

Racing fans will recognize several key moments from Derby Day throughout the video: the turn into the stretch in the GI La Troienne S. with Pauline's Pearl (Tapit) flying on the outside, Jack Christopher (Munnings) taking the lead in the GII Pat Day Mile S., and of course Rich Strike (Keen Ice) squeezing past horses in the GI Kentucky Derby.

Now less than two weeks after its release, the video has over 10.5 million views and is currently one of the top 10 trending music videos on YouTube.

Samantha Bussanich is the co-founder of Nexus Racing Club, a current Godolphin Flying Start trainee, and a big Jack Harlow fan. She has been anticipating the release of this music video since Harlow hinted at its filming during his interview with NBC Sports at the Kentucky Derby.

“In our generation, Jack Harlow is really the next big thing,” she said. “Especially with him being from Kentucky, it's a really big deal to have a superstar like that. All my friends that I went to school with were asking how they can go to the races and maybe see Jack Harlow.”

Bussanich took to social media to share her excitement, but received a surprising stream of backlash from many who disagreed with her belief that a social influencer like Jack Harlow can be positive marketing for racing.

One common argument was that people in their early to mid-20's should not be racing's target market because young people don't have the time and, more importantly, the money to contribute to the industry in a meaningful way.

Busssanich, who recently spent a stint in Australia during her Godolphin Flying Start training, explained that the Australian racing industry is an example of effective marketing that targets an array of race-goer demographics.

“If you're involved in racing at any level, you know that Australian racing is doing it the best,” she said. “Owners, bettors and young people all have a good time. A lot of people get defensive about who is racing's target market. I think that there are multiple target markets and everyone is vital to the success of the industry.”

She pointed out a club in New Zealand called Boy's Get Paid, which was founded 10 years ago by a dozen young men in their mid-20's. According to their website, they were founded as “a group of lads who loved to back a winner.” Their numbers grew over time and today, Boy's Get Paid has over 18,500 members. At the 2020 Karaka Million, their group of 450 people bet $250,000.

“People on social media talk about how the college kid betting $15 or $20 isn't that important, but if you multiply that by 50 or 100, they become vital for the game,” Bussanich explained. “With Jack Harlow's video, even though it might not seem like the biggest deal, it's still getting exposure for the racing industry. If you connect it with something like the Boy's Get Paid club, maybe young people here in the U.S. could become interested in racing and form a club. Those 10 kids could turn into 100 and maybe someday they could buy a horse. It's really about long-term gain.”

Another argument Bussanich encountered was that Harlow's time at Churchill Downs is not the first instance of a famous person stopping by the track. What makes Harlow's Kentucky Derby visit any different?

Bussanich explained that while racing can easily get high-profile names on big race days, the industry often falls short in taking the next step.

“We can't just have a music video and expect people to fall in love with the sport,” she admitted. “We need racetracks and the industry to educate people. The next part of that is about how we grasp people and educate them further from beyond thinking that the track is a fun place to get a drink.”

Again, Bussanich referenced Australian racing as a model worth following.

“In Australia, every trainer has a way for people to get involved,” she said. “If you look on [Hall of Fame Australian trainer] Chris Waller's website, it shows different ways to own horses. There's education there.”

So, can Jack Harlow's music video, and future headlines of pop culture figures at the racetrack, help attract fans who will stick around after the social influencers have come and gone? According to Bussanich, it all depends on how the industry responds.

“Not every day is Kentucky Derby Day, but there are some really awesome events at tracks across the U.S. where young people are bound to have a good time,” she said. “If we can get them to the track and grasp their attention, we need to figure out where to go from there. The education part needs a lot of work. What do we do after we get them to the races? This music video is really great exposure for horse racing and it looks at the highs of the sport in video concept, but now it's about taking that video and seeing what can come from it.”