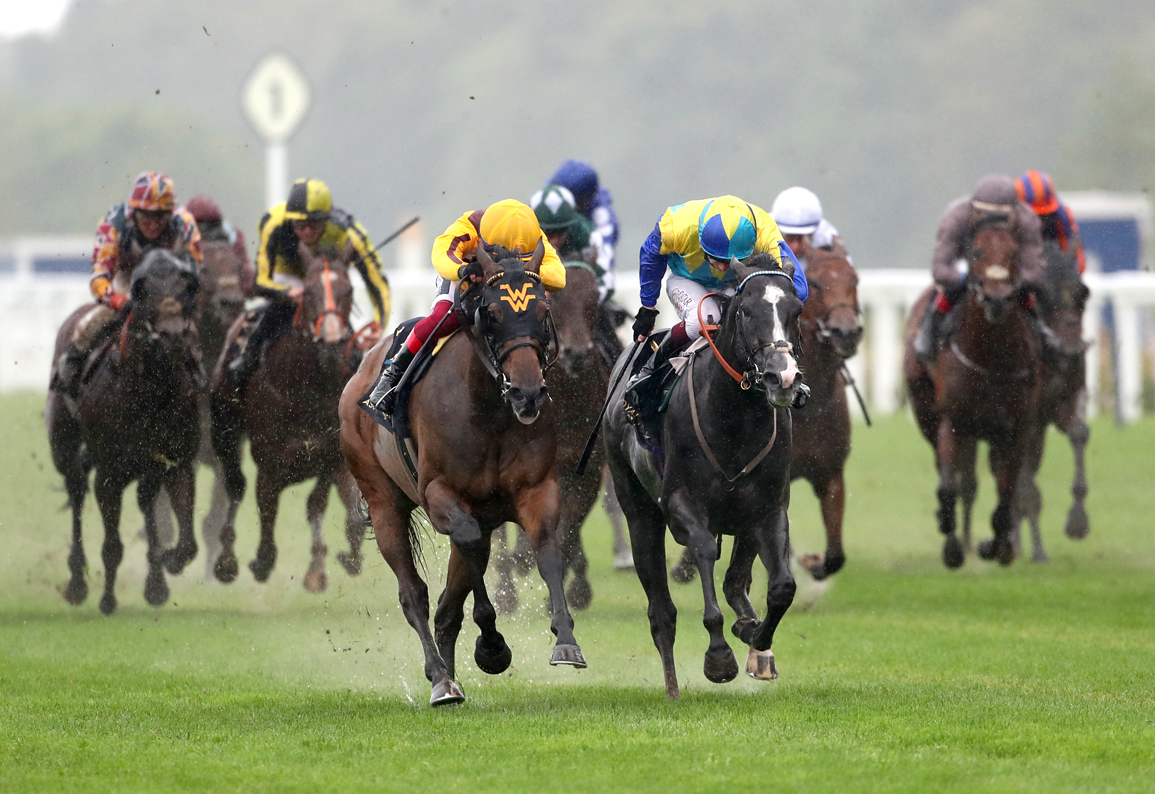 Royal Ascot 2021 cannot be accused of lacking melodrama, especially in the 24 hours from Thursday's Gold Cup to Friday's G1 Commonwealth Cup, with the monstrous monsoon and grim skies the backdrop for an epic renewal of the meeting's premier 3-year-old sprint. As the TDN Rising Stars Dragon Symbol (GB) (Cable Bay {Ire}) and Campanelle (Ire) (Kodiac {GB}) drove past the post, it was the former who was announced the winner by a head but after an agonising spell for connections of the transatlantic duo the stewards duly reversed the placings to end Wesley Ward's drought. With the final 1 1/2 furlongs constantly re-run from every angle on the screens following the inspiring duel between two such talented sprinters, the rightward drift of Archie Watson's flagbearer was considered the crucial factor in the outcome. Campanelle, who was so strong on the front from the outset under Frankie Dettori, was bumped and rubbed up by Dragon Symbol as the line approached and her rider felt he had received justice. “I feel sorry for connections of the runner-up, but in these conditions when you get carried across eight lanes, get nudged three times, lose momentum and get beaten a head, I had reason to believe that my filly was best on the day,” he said of the 5-1 shot. “I was coming back at the line and so the stewards gave me the benefit of the doubt. It was a good effort by both horses, but I'm glad that we've got it.” Whatever the decision of the powers that be, this will also be remembered as a demonstration of dominance from the front pair, who were five lengths clear of Measure of Magic (Ire) (Kodi Bear {Ire}) in third with some classy contemporaries spaced out behind.

This renewal suffered from high-profile withdrawals such as the G2 Richmond S. and G1 Middle Park S. hero Supremacy (Ire) (Mehmas {Ire}), his promising stablemate Diligent Harry (GB) (Due Diligence) and the high-class Miss Amulet (Ire) (Sir Prancealot {Ire}), but what it lost in cast members it more than made up for in terms of excitement. As Dragon Symbol surged by the Stonestreet colour-bearer passing two out, it looked momentarily as if he would comfortably take her measure but as far as last year's G1 Prix Morny and G2 Queen Mary S. heroine was concerned it was merely game on. Leaving George Strawbridge's unbeaten 9-4 favourite Suesa (Ire) (Night of Thunder {Ire}) and the rest behind as they drove on together, Yoshiro Kubota's grey lugged right and although Murphy initially had his whip in the correct hand his switch to his left meant that it would be tougher for him to keep the prize. Campanelle was in front again nearing the line, but when straightened up Dragon Symbol managed to thrust his head back up where it mattered.

Murphy deserves credit for his handling of the inquiry's outcome and said, “I am disappointed for the connections of Dragon Symbol. There was a massive Japanese interest, he finished the race in front, but it wasn't meant to be,” he said. “I went into the stewards' room, I told them I was on the best horse, Frankie said I was on the best horse, but it didn't go my way.”

Wesley Ward, whose juvenile brigade had missed their respective targets one after another throughout the week, was a relieved man. “We are elated. Both horses ran fantastic, they dug down deep and they were only inches apart,” he said. “I think it was a validated result–in the United States terms, he has taken her across the track. Archie Watson shook my hand after the enquiry, a true gentleman. This was Campanelle's first run since the Breeders' Cup. It was a gritty performance on heavy ground and, to come back from that, it is a true testament of how good this filly is. We weren't sure about heavy ground, but we knew she liked soft ground.”

“Winning at Royal Ascot is so special, especially with my children here from the onset in 2009, it has been so special,” Ward continued. “To have Campanelle ponied down by my first winner Strike the Tiger too means a lot. Royal Ascot has changed my life. If it wasn't for Royal Ascot, my kids would be going to community college and instead my eldest son is going to law school in August. We'll sit down with the owners. Campanelle worked well on the July Course, but the [G1] July Cup [at Newmarket July 10] could come a bit quick. I have run horses in the [Aug. 8 G1] Prix Maurice de Gheest [at Deauville] in the past and I think she'll do well whatever ground comes on the day. I think it would suit. Campanelle is going up the pecking order. Lady Aurelia was very special, but if she keeps delivering, she'll keep going up.”

Watson had said before the inquiry's outcome was announced, “He's run a huge race and he's an incredibly tough horse–we came here knowing that although he handled the ground at Haydock he wouldn't be in love with it. For a team like us, even though we are a fair-sized yard, to compete with the big stables on a stage like this means a lot. He's always been very talented and was still a big baby and unfurnished last year, so we gave him plenty of time and he's come right and improved from run to run. He's a pleasure at home and the team have done a fantastic job with him. Just to have a horse of this quality is massive and we've still got a very good horse on our hands.”