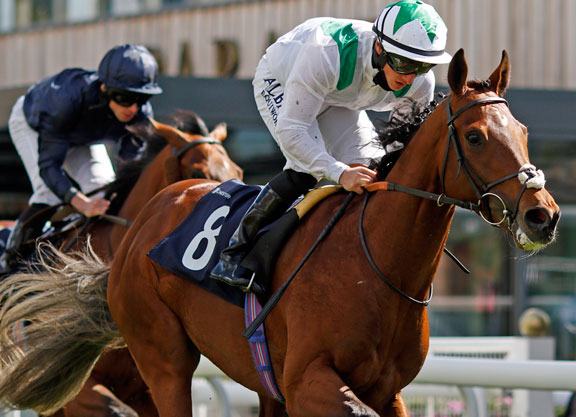 Bouncing back from a fourth in last month's Listed Feilden S. at Newmarket on seasonal comeback, Ahmad Al Shaikh's Youth Spirit (Ire) (Camelot {GB}) dented a number of Classic aspirations with a determined victory in Wednesday's G3 Chester Vase. He had bettered a debut fourth over seven furlongs at Haydock when annexing a hot Newmarket maiden tackling the same trip next time and hit the board contesting Goodwood's July 28 G2 Vintage S. in the last of three juvenile outings. The April-foaled bay was let go at 15-2 and settled third along the fence, in the wake of 6-4 pick and eventual fourth Wirko (Ger) (Kingman {GB}), through halfway in this extended 12-furlong Classic trial. Bustled along as the tempo increased approaching the quarter-mile marker, he straightened for home in second–as Fancy Man (Ire) (Pride of Dubai {Aus})'s forward thrust carried that rival to the front on the final turn–and stayed on strongly under a late drive to withstand the running-on effort of Sandhurst (Ire) (Galileo {Ire}) by 1 3/4 lengths. Fancy Man ultimately suffered for his home-turn burst and finished one length back in third, with Listed Blue Riband Trial victor Wirko fading late to finish another seven lengths adrift in fourth.

“He's always been a horse we've rated very highly, but the question mark was whether he stayed or not,” admitted Andrew Balding. “There is stamina on the sire's side, obviously, but there is plenty of speed on the dam's side. He saw the trip out really well and I'm thrilled. I knew he'd improve a good bit from Newmarket, because he'd been off the track a long while before running there, and everything happened a bit quick for him. He's obviously come on for it and I thought he did everything really nicely today.”

Looking ahead to a date with Classic destiny, Balding indicated Youth Spirit will bid to mark the 50th anniversary of the Ian Balding-trained Mill Reef making an indelible mark on the Blue Riband honour roll by going one better than connections' runner-up finish with Khalifa Sat (Ire) (Free Eagle {Ire}) last year. “The plan, as long as everything goes all right between now and then, is to head for Epsom [for the June 5 G1 Derby]. I obviously can't compare him with Mill Reef because I wasn't around then and, in any case, Youth Spirit is a long way from ticking the boxes that Mill Reef had, but he could have a live chance in the Derby.”

Jockey Tom Marquand added, “It's great for [owner] Ahmad Al Shaikh to have another one for the Derby. Last year that was a fairy story with Khalifa Sat finishing second and, hopefully, they can go one better. Khalifa Sat surprised me in the Derby because he looked more of a staying type. This lad is the other way around and 12 furlongs is as far as he'll want. He is really game and genuine and I'm sure we'll have a go. It will have been a real good experience to have been around here because it is pretty different compared to everywhere else. It should stand him in good stead for Epsom.”