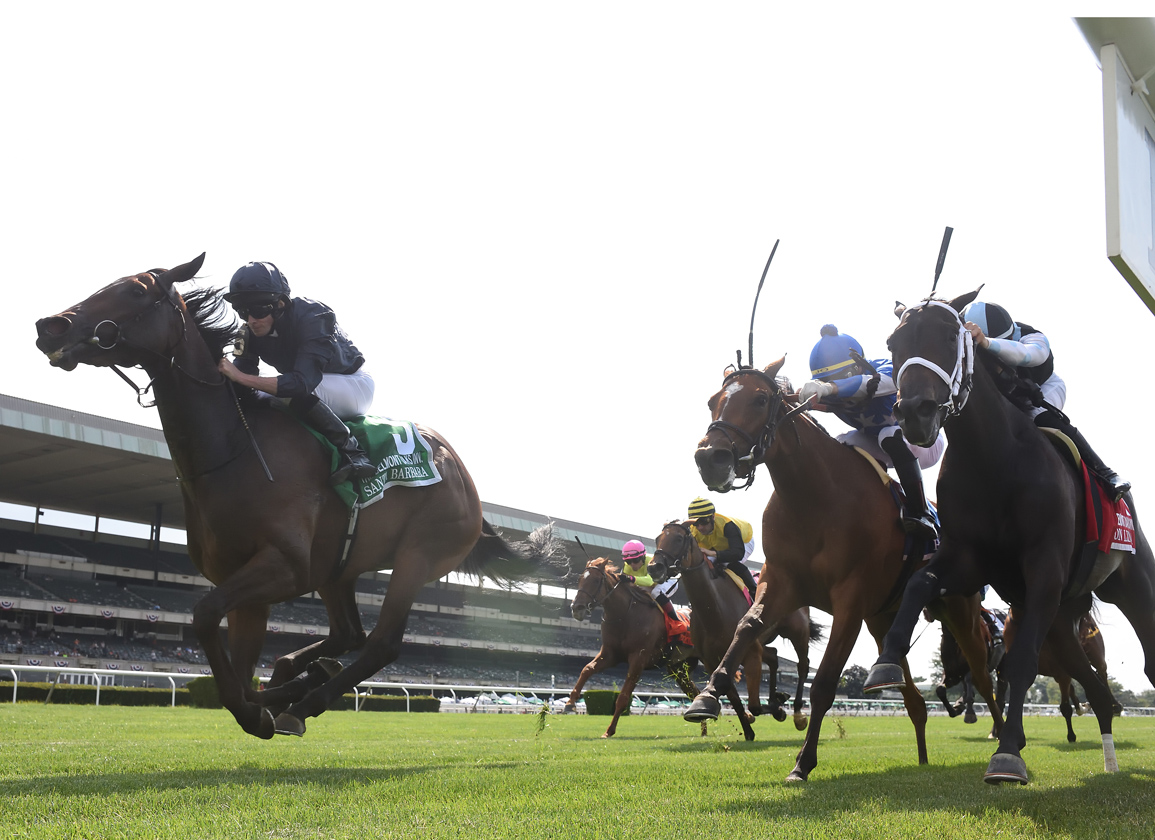 Santa Barbara (Ire) (Camelot {GB}) worked through traffic late to break through in her fourth straight attempt at the highest level and complete the first half of the GI Belmont Oaks/GI Belmont Derby double for the Coolmore contingent Saturday. Deemed a 'TDN Rising Star' off a 2 1/2-length debut success at The Curragh last September, the buzzed-about bay could only manage fourth in the G1 QIPCO 1000 Guineas at Newmarket May 2 and again in the G1 Cazoo Oaks at Epsom June 4–both as the favorite. She was most recently beaten a neck in the G1 Pretty Polly S. June 27.

Looking to provide her powerful owners with a third Belmont Oaks title, and Aidan O'Brien with his second in four years, the favorite drafted in midpack in between rivals through splits of :24.71, :51.31 and 1:16.40. She had nowhere to go at the top of the lane, but Ryan Moore wheeled her out a path and a sliver of daylight appeared. She sliced through that seam, and kicked on determinedly to collar pacesetter Con Lima (Commissioner) in the final strides. Higher Truth (Ire) (Galileo {Ire}) rounded out the trifecta for her superstar sire, who passed away Saturday at Coolmore Ireland and was soon to be represented by the Belmont Derby winner.

“It was quite a steadily run race,” said Moore. “They lined up and I was hoping Nazuna (Ire) (Kodiac {GB}) would drop away a bit sooner. I didn't want to waste too much petrol by going around her. She's got class. She's got ability. She won without me moving a muscle… I had to go out one switch (path) and I didn't want to, but I had to. We're lucky we got out in time. She done it very easily. I'm very happy with her.”

T.J. Comerford, assistant O'Brien, offered, “She's been used to faster ground, so it probably took her a while to pick things up today on that slow ground. That was a good performance for her. Ryan knows her better than anyone and he knew that she had plenty of speed, so it was never a problem. She showed plenty of turn of foot in her other Group 1 starts in the Oaks and at The Curragh, she got beat by a good older filly. She's getting better as she gets on. Anytime you win a Group 1 is great.”

Pedigree Notes:
Santa Barbara follows in the hoofsteps of Athena (Ire) (Camelot {GB}), who won this race for the same connections in 2018 off of a third in the Pretty Polly. Wonderment (Ire) (Camelot {GB}) was second in the 2019 renewal. Galileo's longtime stablemate Camelot is now responsible for eight highest-level winners and 26 grade/group winners.

As far as European pedigrees go, few are better bred for Stateside success than Santa Barbara. Dam Senta's Dream is a daughter of 2002 GI Breeders' Cup F/M Turf heroine Starine, and was purchased for just 14,000gns at the 2013 Tattersalls December Mares Sale in foal to Equiano (Fr) (that foal, the eventually placed Tisa River (Ire), sold for 400,000gns at the same sale last year).

Senta's Dream's first five foals didn't do much, but her next three have certainly made up for it. Her 2016 filly Iridessa upset the 2019 GI Breeders' Cup F/M Turf for Joseph O'Brien, while her 2017 colt Order of Australia belied incredible 73-1 odds to upend last year's GI Breeders' Cup Mile. Santa Barbara is her dam's final registered foal.