Camelot's English King Too Good In the Derby Trial 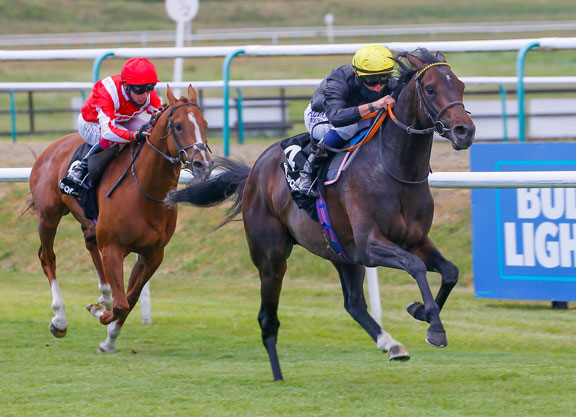 Twelve months after Anthony Van Dyck (Ire) (Galileo {Ire}) brought kudos back to Lingfield's Listed Derby Trial, the former group 3 contest played host to another with potential to roll it back to the glory days of High-Rise (Ire), Kahyasi (Ire) and Slip Anchor (GB). While Bjorn Nielsen's colours were being adorned by Frankie Dettori at Newmarket, the Ed Walker-trained English King (GB) (Camelot {GB}) was carrying them around this Epsom-like terrain as if he was on wheels. Moments after he had brushed aside the G3 Zetland S. runner-up Berkshire Rocco (Fr) (Sir Percy {GB}) and won as he liked, his odds for the July 4 G1 Epsom Derby were tumbling to 5-1 such was the manner of this display.

Improving off a debut seventh over a mile at Newmarket Oct. 23 to win over 10 furlongs on Newcastle's Tapeta four weeks later, the bay arrived here with a tall reputation and was on the subject of strong support despite several of his rivals having a distinct experience edge on him. Anchored in rear early by Tom Marquand, he travelled ominously smoothly as he made up ground effortlessly and when pulled out in the straight simply breezed by his market rival approaching the final furlong. Pushed out with hands and heels from there, he had 2 3/4 lengths to spare and had strung out some useful yardsticks to give connections hope that he will be a major player on the first Saturday in July.

Marquand said, “Coming here today, there is always a question mark down that hill and he still clearly has signs of immaturity, so to have won that impressively and gone away in the style he did, we are all pretty excited about him. He is one to look forward to for the future, not just for Epsom.”

For Ed Walker, English King could provide a watershed moment in his training career and he was left pondering achieving the ultimate ambition next month. “The Derby is one of those races that gets me going, so it is very exciting to have a live contender, God willing–we still have a long way to go,” he said. “Bjorn and I chatted about it beforehand and we both agreed that if we had a genuine Derby horse on our hands we needed to win and win very easily. That was exciting and you just wouldn't quite know with him. He goes through the motions at home and is a very relaxed and a playful horse. It has been a fact-finding mission today and he couldn't have done any better. The exciting thing is he has a high cruising speed, he has a turn of foot and he stays and those three together are the three qualities you need in a very good horse.”

“We've had some good horses, but not a group one horse. Stormy Antarctic has bashed on the door a few times, we've had a few others place in group ones, but now he is as exciting as we have had. We were hoping, but not expecting, because we have nothing to match him at home, so it's really exciting. I know the distance wasn't that far from Berkshire Rocco, but I think he did it pretty easily. He is that kind of horse, he's not a horse who will win a race by 10 lengths, that's not his style and his home work would suggest that as well. He's a cool dude. We'll freshen him up again for Epsom in a month's time, I think it would be reckless to try to squeeze in another one. I don't think he needs it, he will have learnt amount round there.”

English King hails from a family that has already had a few meaningful tilts at Epsom glory with mixed results. His dam Platonic's granddaughter Magic Wand (Ire) (Galileo {Ire}) had a rare off-day when fourth in the 2018 Oaks, while under the third dam Alexandrova (Ire) (Sadler's Wells) swept all aside in that Classic in 2006. The latter's full-brother Masterofthehorse (Ire) snuck into a close-up third behind Sea the Stars (Ire) in the 2009 Derby, two places ahead of his relative Golden Sword (GB) (High Chaparral {Ire}) while a year earlier Alexandrova and Masterofthehorse's half-brother Washington Irving (Ire) (Montjeu {Ire}) was also fifth in the blue riband.

Sold for 100,000gns at the 2004 Tattersalls December Mares Sale, Platonic has proven an inspired purchase. In the last two months of 2019, her 3-year-old and 4-year-old daughters Mulan (Ire) (Kingman {GB}) and Ionic (GB) (Intello {Ger}) sold for and 420,000gns and 450,000gns respectively as broodmare prospects at Tattersalls December, weeks after her yearling son of Le Havre (Ire) was bought by John Foote Bloodstock Pty Ltd for for €80,000 at Arqana October.