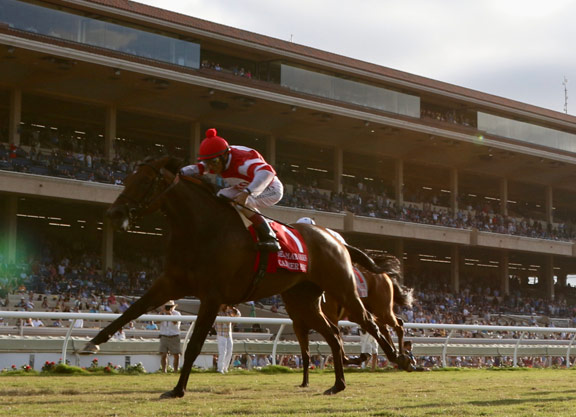 The Chad Brown-trained Cambier Parc (Medaglia d'Oro) provided owner Larry Best of OXO Equine with his first Grade I victory Saturday in the GI Del Mar Oaks, punching clear late for a decisive score. It was the first win in this event for Brown, who saddled Dunbar Road (Quality Road) to a victory in Saratoga's GI Alabama S. just over three hours earlier.

Away well from her rail draw, the 6-5 chalk raced in mid-pack early, saving ground as Raymundos Secret (Treasure Beach {GB}) clicked off opening splits of :23.31 and :46.89 with Keeper Ofthe Stars (Midnight Lute) and the Brown-trained Dogtag (War Front) in tow. Tipped out two wide by Hall of Famer John Velazquez on the backstretch run, the $1.25 million KEESEP buy began sneaking up the outside as three-quarters went up in 1:10.50. Swung out five wide turning for home, the bay was bumped a bit by Hidden Message exiting the bend, but she was undeterred. Cambier Parc kicked it into high gear in the lane, unleashing a furious turn of foot to overtake the leaders and win well. Hidden Message completed the exacta, holding off a late run from Lady Prancealot.

A four-length graduate in her second start at Gulfstream Jan. 2, Cambier Parc followed suit with a win in the GIII Herecomesthebride S. there Mar. 2 and was fourth next out behind divisional leader Concrete Rose (Twirling Candy) in the GIII Edgewood S. at Churchill Downs May 3. Besting her favored Breeders' Cup-winning stablemate Newspaperofrecord (Ire) (Lope de Vega {Ire}) in Belmont's GIII Wonder Again S. June 6, she checked in third behind Concrete Rose last time in the GI Belmont Oaks Invitational S. July 6.

Cambier Parc is the 22nd Grade I winner for leading sire Medaglia d'Oro and is bred on the same Thunder Gulch cross as top-level scorers Mshawish and Passion For Gold. The winner is out of Canadian Horse of the Year Sealy Hill, winner of three Sovereign Awards, the Canadian Filly Triple Crown and a Grade III, in addition to a pair of Grade I-placings, one of which came in the Breeders' Cup F/M Turf. Her first foal was fellow Sovereign Award winner Hillaby (Distorted Humor) and her third foal was Grade III winner Belle Hill (Sky Mesa). Two foals later came another graded winner in Gale Force (Giant's Causeway). Sealy Hill was sold to Regis Farms for $590,000 at the 2013 Fasig-Tipton February Sale and was resold as part of that operation's dispersal for $750,000 at the 2015 Keeneland November Sale with Cambier Parc in utero. Whisper Hill Farm's Mandy Pope purchased Cambier Parc's now-2-year-old full-sister for $425,000 at last term's Keeneland September Sale. The 15-year-old Sealy Hill produced an Into Mischief colt last year and failed to get back in foal to Distorted Humor for 2019.