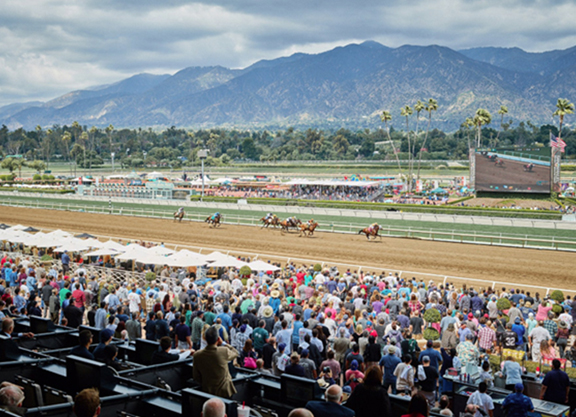 California became the first state to opt into the Horseracing Integrity and Safety Act (HISA) enforcement structure on Thursday when the California Horse Racing Board (CHRB) voted 7-0 to collect and remit fees on behalf of the new federal HISA Authority.

For 2022, HISA has assessed California's portion of the Authority's budget to be $1.4 million, a figure that is based on starts and purses, and amounts to roughly 10% of the overall nationwide budget. It includes only the safety portion of the HISA program that will go into effect July 1 (and not the still-in-limbo drug testing protocols that won't yet be up and running).

Commissioners articulated a consensus during the board's monthly meeting that if the CHRB didn't proactively step up to support HISA, the state's tracks, horse owners, and other industry stakeholders would have to not only pay the costs, but figure out how to set up and staff a new infrastructure to enforce the federal regulations.

“We had a meeting with associations, owner groups and the California Thoroughbred Trainers last week,” said CHRB executive director Scott Chaney. “And most voiced support for this. Because tracks, it's my impression, don't want to be burdened with getting a bill and having to figure out who's going to pay it and how they're going to pay it.”

The unanimous Apr. 21 vote was conditional upon receiving statutory approval to allow state employees to enforce federal rules and to make budgetary and spending changes that the CHRB is not yet able to do.

“We, the CHRB, do not currently have that authority,” Chaney said. “But we are seeking it through budgetary language, which would amend the Business and Professions Code to allow us to do this, in addition to a budget change proposal, which would give us the spending authority to include the Authority's fee in our budget.”

Chaney underscored to commissioners that he does not expect that process to be complicated or cumbersome. It will likely be accomplished by attaching what is known as a “trailer bill” to the state's annual budget legislation.

Chaney added that government officials have been made aware by CHRB staff that the HISA changeover is in the pipeline, and that agencies he's dealt with have been “really accommodating,” to the point that he is “hopeful that it wouldn't be a big deal.”

Commissioner Wendy Mitchell termed partnering with HISA as “a no-brainer, only because if we don't opt in, then [the responsibility will] go directly to the tracks and we don't have a say. And certainly, you know, you can't fight city hall. So we should be part of the process versus opting out.”

Other states haven't been as welcoming. Facing a May 1 deadline to declare in-or-out status on the collection and remittance of fees, state racing commissions in New Jersey, Maryland and Texas have already said no to HISA.

“While short-term [for] some states it feels good to opt out, kind of to be obstructionists. [But] in the long run, I think this is actually a cost savings for the industry,” Chaney said.

“Kentucky and Minnesota appear to be leaning toward opting in,” Chaney told commissioners prior to the vote. “[New York] initially indicated that they were opting out. From what I understand, in talking to some of their officials, it's an open question now. They're kind of warming more up to the concept as it became more clear.”

Chaney said that details about the Authority are emerging rapidly, so it won't be unusual to see other jurisdictions altering their opinions on whether to opt in or out.

“Frankly, this has come much better into focus in the last month, and so everyone is trying to get up to speed with respect to the implications to their particular state,” Chaney said.

So what will change?

HISA's Authority is tasked with regulating both racing safety and anti-doping and medication control. The safety rules have already been approved by the Federal Trade Commission and will be phased in starting July 1. Snags in getting a medication control agency under contract have caused that portion of the program to be delayed.

With respect to the accreditation and “best practices” safety protocols, Chaney said California will see little change in those areas, because “our current regulations were largely the model for the Authority's structure.”

The HISA whip regulations have the same six-strike limit as California's. But HISA will permit using the whip in the overhead manner, which California does not.

If a jurisdiction doesn't undertake the enforcement of these new rules, “The Authority has to supply another set of stewards and all the things that it's going to take to actually enforce the safety regulations.”

And if that happens, Chaney added, tracks and stakeholders can expect to “be billed for that additional expense.”

On the drug enforcement side of the program–which isn't expected to be up and running until at least 2023–Chaney said that the stakeholders the CHRB met with last week did express concerns about that process and its associated expenses.

“There are some question marks that still linger, notably how much the anti-doping and medication control part will cost,” Chaney said.
Commissioner Thomas Hudnut said he supported the HISA opt-in. “But I do want to register concerns about the lack of clarity thus far when it comes to anti-doping measures,” he added.

Hudnut said that giving control “to the United States Anti-Doping Agency, which is an on-again, off-again proposition, is probably not very good. We have a record of being a leader in this state in testing. The Maddy labs and UC-Davis are the recognized top dogs in the field, and I think it would be a great disservice, not only to our state, but to racing in general, were they not part of the solution.”

Chaney said that once the HISA Authority identifies an agency to run that program, he doesn't think there will be “any real question” about whether the Maddy lab will continue to do testing. But the scope of the work and its funding will still have to be negotiated.

So who ultimately pays?

Once the Authority begins extracting fees from states to fund its budget, it's up to the states (either via their commissions, the tracks, or stakeholders) to figure out how to pay for the oversight.

Chaney said that “associations could structure this in any way, but most seem to be contemplating a fee per start paid by the owner. I think that many tracks are worried about this approach, as it may create a competition among tracks based on how much the Authority fee is to start in a particular race.”

By going the route of using the ADW revenue stream to fund its portion of the program, horse owners will be spared direct expenses.

As Chaney explained it, “There are several distributions from market access fees. Those wouldn't change. What would happen is, the stakeholders would come up with a separate formula [for] this particular expense as well.”

So does that mean bettors will end up being stuck with paying California's HISA bill?

That topic didn't come up during Thursday's meeting, but TDN asked the CHRB for a clarification.

“No change in takeout. Stakeholders will just be voluntarily giving up a bigger share of their revenue from ADW. Won't affect bettors at all,” wrote CHRB spokesperson Mike Marten.