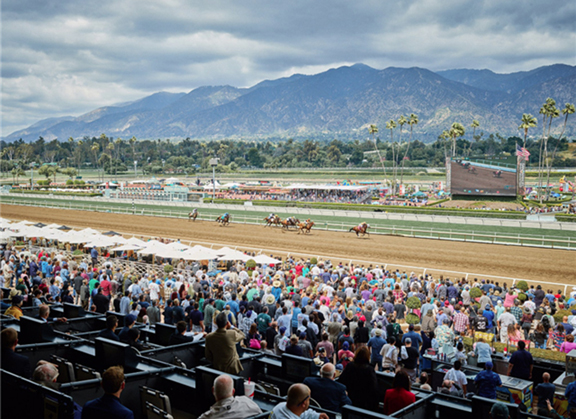 News last week that more than 200 people living or working on-site at Golden Gate Fields had tested positive for COVID-19, and that the facility would have to close its doors to live racing through November, arrived against a state-wide backdrop of rising cases, hospitalizations and COVID-related deaths.

As with Golden Gate, these trends have landed with subsidiary impacts. Over the weekend, L.A. County public health officials suspended outdoor restaurant dining. Before that, the county announced other restrictions, including curfews and capacity limitations at certain stores and other public places.

This has prompted some within the industry to wonder whether other California tracks might fall foul of the reimposition of business restrictions–as happened at Santa Anita earlier in the year, for example, when the facility was temporarily closed as the pandemic first took grip.

TDN reached out to representatives of Golden Gate for information on the status of the positive cases, along with the chances of live racing resuming in December. David Duggan, Golden Gate general manager and vice president, responded in a message Tuesday that an update would be arriving soon.

Los Alamitos has thus far avoided being shuttered as a result of the pandemic, though the facility did cause a stir earlier this year, with an outbreak among the SoCal jockey colony was blamed by some on lax protocols at the track's jock's room–an accusation track management hotly denied.

Los Alamitos is in Orange County, another region where COVID cases, hospitalizations and deaths are on the rise. The facility is scheduled to conduct a live daytime Thoroughbred meet running Friday Dec. 4 through Sunday Dec. 20.

According to Jack Liebau, vice president of the Los Alamitos Racing Association, there are “at this moment” no confirmed COVID cases among people living or working on-site at the track, “that we know of.”

As a result, the anticipated December meet at Los Alamitos is expected to proceed as scheduled, said Liebau–though he emphasized the unpredictable nature of the pandemic.

“It could change within the hour,” he said, pointing to the vagaries surrounding testing and accuracy of results. At Golden Gate, for example, 95% of the cases were reportedly asymptomatic. “It's a bad situation–I worry about myself getting it. It's personal.”

Horses currently shipped from Golden Gate to other facilities, including Los Alamitos, are being sent without their usual grooms to be housed at the barn of a local trainer. As a consequence, the Los Alamitos program book will list the substitute trainer alongside that of the official trainer, Liebau explained.

The current 15-day Del Mar fall season is scheduled to end this Sunday. All jockeys flying in from out-of-state to ride at Del Mar this weekend tested negative 72 hours prior to arriving, “and they're all getting tested again once they're in San Diego,” said Josh Rubinstein, Del Mar Thoroughbred Club president. “They'll also reside in the auxiliary jock's room for the duration that they're here.”

Unlike the recent Del Mar summer meet, comprising some 1800 horses and 1000 backstretch staff, the current fall meet is being conducted on a smaller scale–some 400 horses and 250 staff, said Rubinstein.

One backstretch worker tested positive for COVID at the start of the current meet, said Rubinstein. None since, he added. “We've been very diligent, reminding people of how serious this is,” Rubinstein said.

Further afield is the start of the next Santa Anita meet, penciled in for Dec. 26. According to Nate Newby, Santa Anita senior vice president, the facility hasn't recently received communication from the LA County public health department “for a couple reasons.”

For one, “since they've implemented those new rules, and we're not open for simulcasting, it wouldn't really apply to us,” he said. “But with the meet being a month away, I'm sure they'll be checking in.”

Secondly, the Arcadia facility hasn't had a positive COVID case in 14 days, said Newby. “The threshold they're looking at is if you have three in the last 14 days, then they start looking at your facility, the employees and anybody on site,” he said. “Knock on wood, we're on a bit of a good stretch.”

The scheduled winter-spring meet will be conducted under similar conditions and restrictions as the recently concluded autumn meet, said Newby, not that the facility has loosened protocols in the interim. “We still have the backstretch really locked down to essential workers only,” he said.

“We're just going to keep doing everything we're doing, and hope,” Newby added, before pointing to the Moderna and Pfizer developed vaccines that are reportedly 90% effective. “I think, along with everybody, we're rooting for the vaccine and other things to be in a better situation in a couple months.”

In a recently released draft interim plan for a vaccine rollout in California, such an effort will be done in three phases, beginning with health care and other essential workers, followed by other targeted groups including vulnerable populations and underserved communities. The third phase will encompass remaining populations.

According to California Horse Racing Board executive director, Scott Chaney, the board hasn't yet opened a dialogue with the governor's office about how rollout of a vaccine might overlap the racing industry.

“I know that's a national conversation right now, and it seems like in the next month or two a vaccine might come online,” Chaney said. “But as far as I'm aware, the CHRB hasn't had any discussions based on who gets them and so on and so forth.”