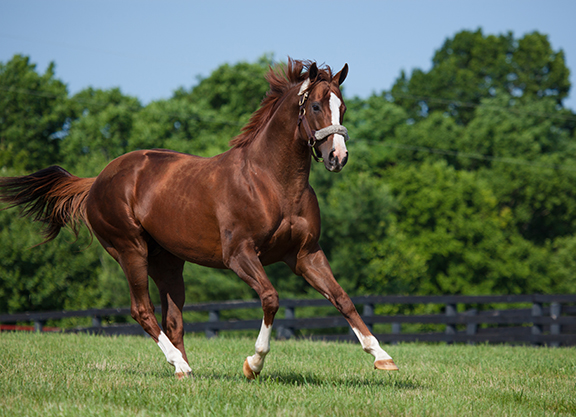 Two-time US Horse of the Year California Chrome (Lucky Pulpit) is recovering well from a bout with enteritis since his arrival at Arrow Stud Jan. 29, the JS Company–who manages the stallion business at Arrow Stud–reported across social media early Thursday (Japanese time). He was not part of the Arrow Stud stallion parade in recent days, prompting concern, but he will be paraded in March.

The tweet read: “Dear all of fans, CC has a minor enteritis after arriving at Arrow Stud and recovering now. Fortunately, he eats very well and his condition becomes better day by day. We are looking forward to a chance to show him next month. Thank you very much for your support. J S Co.”

Horse of the Year in 2014 and 2016, California Chrome retired to stud at Taylor Made as the richest winner of the GI Kentucky Derby in history, having added the G1 Dubai World Cup to his resume. Last November it was announced that the syndicate that owned California Chrome agreed to move forward with a sale to Japan. California Chrome, who is expected to begin covering mares in short order, will stand his first season for a fee of ¥4 million ($36,471). His first US-sired crop are 2-year-olds of 2020 and he also stood the 2017 and 2018 Southern Hemisphere breeding seasons at Haras Sumaya in Chile.