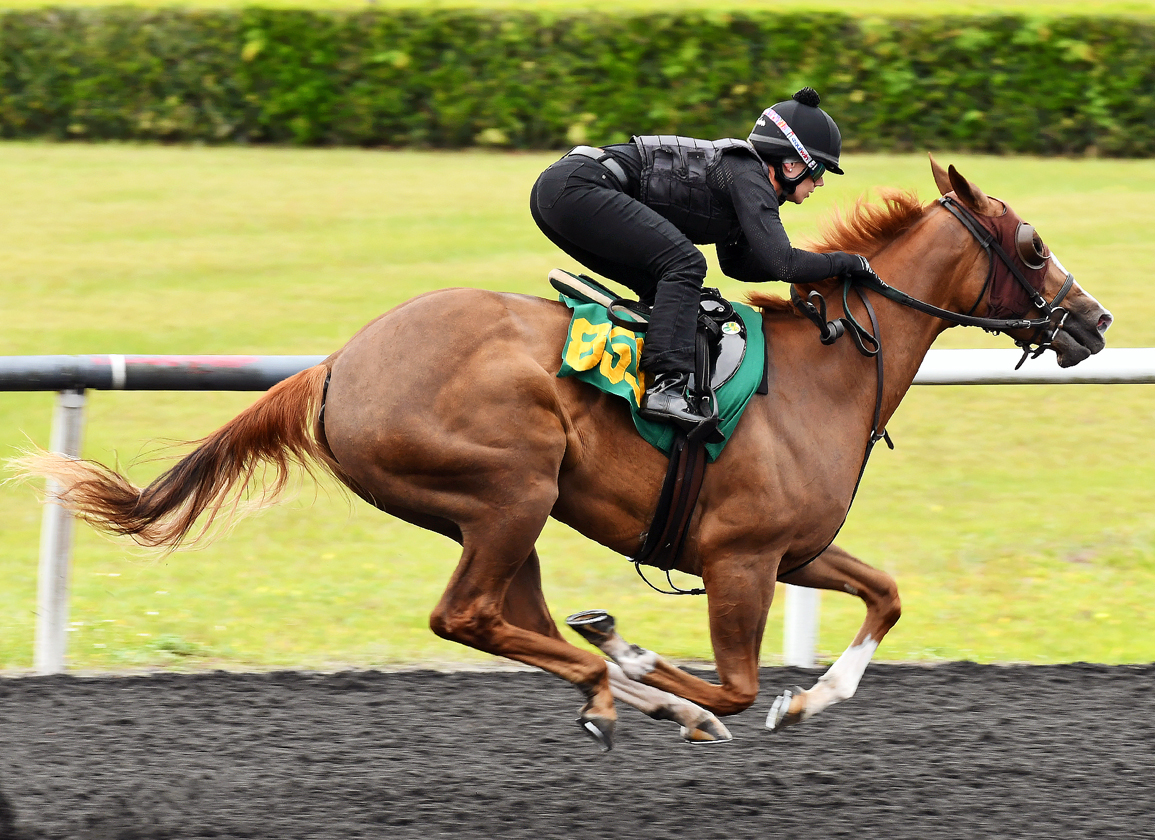 The fifth session of the under-tack show for next week's Ocala Breeders' Sales Company's Spring Sale of 2-Year-Olds in Training, suspended just under three hours by heavy rain, produced a pair of :9 4/5 bullet breezers, while two juveniles shared the fastest quarter-mile time of :21 flat Thursday in Central Florida.

First to hit the bullet time of :9 4/5 once action resumed around noon Thursday at OBS was a daughter of Cairo Prince (hip 839) out of the unraced Nippy (Pulpit). The gray filly is a half-sister to graded stakes winner Gibberish (Lea). She is consigned by Hal Hatch's Halcyon Hammock Farm and was purchased by Hatch for $62,000 at last year's Keeneland September sale.

Also working in :9 4/5 during the same set was hip 859, an Irish-bred daughter of Lope de Vega (Ire) out of stakes winner and multiple group placed Only Mine (Ire) (Pour Moi {Ire}). Purchased by West Bloodstock for €250,000 at last year's Goffs Orby sale, she is consigned to the Spring sale by Niall Brennan Stables.

“I never expect :9 and change, but I expected her to work well,” said Niall Brennan, who is consigning the juvenile on behalf of a client. “She prepped well and she looks fast. She looks like a turf sprinter. And she's very honest. She's a nice, average-sized, strong well-made filly with great balance. And she's an efficient mover.”

Hip 859 is one of 10 Irish-bred offerings in the Spring sale. Brennan said an increased focus on turf racing in the U.S. should make the filly appealing to domestic buyers.

“The stallion is so good–he's a top stallion in Europe–and the mare is young and she could run,” Brennan said of the filly's pedigree. “Turf racing is very popular now in America, too. There is a lot more turf racing, even for 2-year-olds, and the money is great, especially in Kentucky and New York. I don't think people are really that afraid to buy turf horses anymore, even at the 2-year-old sales. If you win a stake and you're in that winner's circle, it doesn't matter if it's a turf race or a dirt race, you're just as happy.”

Hip 851, a colt from the first crop of GI Belmont S. winner Tapwrit, shared Thursday's quarter-mile bullet time of :21 flat. Consigned by Eddie Woods, the gray juvenile is out of Oh Kay See (Notional), a half-sister to Grade I winner So Many Ways (Sightseeing). He was purchased by Quarter Pole Enterprises for $100,000 at last year's Fasig-Tipton July sale.

Pick View LLC sent out a filly by Dortmund (hip 864) to also work the quarter-mile in :21 flat. The chestnut is out of Our Conquistadora (Wilburn), a half-sister to graded placed Augment (Aptitude). She was purchased by Thorostock for $25,000 at last year's Fasig-Tipton Midlantic Fall sale.

The breeze show, which was suspended shortly after 9 a.m. Thursday, resumed just before noon and concluded by 4 p.m., but conditions remained good throughout the day, according to Brennan.

“There was a lot of rain, which kind of surprised everybody,” he said. “Looking at the forecast last night, there was nothing about it and then suddenly this morning we were all seeing this come in. We got some of the breeze show in and they made the right call to suspend it. It got heavy and there were thunder storms. It rained for a good hour, hour and a half. There was a lot of water, but they gave the track a chance to drain, they harrowed it. It's an amazing surface that they had that much rain and half an hour after it stopped we were back breezing. The track was in excellent condition.”

The under-tack show continues through Saturday with sessions beginning daily at 8 a.m. The Spring sale will be held next Tuesday through Friday with bidding commencing each day at 10:30 a.m.