Cairo Prince Firster Goes Gate To Wire at the Big A 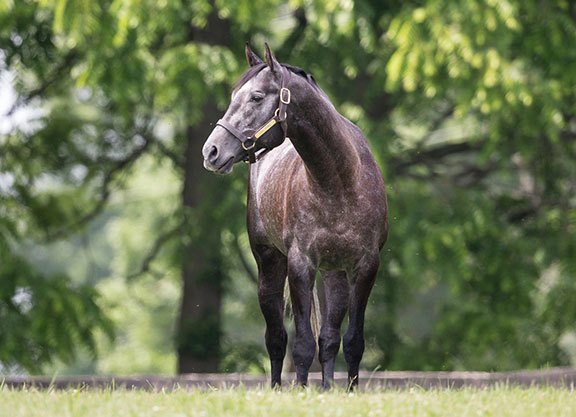 5th-Aqueduct, $70,000, Msw, 11-9, 2yo, f, 1 1/16mT, 1:42.99, fm.
SEDUCER (f, 2, Cairo Prince–Zloty {MSP, $131,634}, by Exchange Rate), let go at 15-1 for top connections with a slow and unassuming Saratoga worktab on display, was given a well-rated ride from the front by Joel Rosario and had plenty left for the stretch drive to charge home a very impressive debut winner Saturday at Aqueduct. Given a positive ride from gate four, the dark bay covered the opening quarter in :23.65, but took a breather through the next couple of furlongs and the six panels was up in a manageable 1:13.18. Shaken up off the home corner, Seducer put a couple more lengths on her rivals and had Rosario checking the rearview through the final sixteenth. Favored Luck Money (Lookin At Lucky) sat a good trip from fourth and made inside progress into the lane, but was no match for the winner and was beaten by 3 1/4 lengths into second. Purchased in utero for $145,000 at the 2016 Keeneland November Sale, Seducer has a yearling half-sister by Into Mischief who fetched $260,000 at this year's September sale, and a foal half-sister by Candy Ride (Arg). The multiple stakes-placed Zloty was most recently bred to More Than Ready. Sales history: $24,000 RNA Ylg '18 KEEJAN; $75,000 Ylg '18 KEESEP. Lifetime Record: 1-1-0-0, $38,500. Click for the Equibase.com chart or VIDEO, sponsored by Fasig-Tipton.
O-Cheyenne Stables LLC; B-ERJ Racing (KY); T-Christophe Clement.