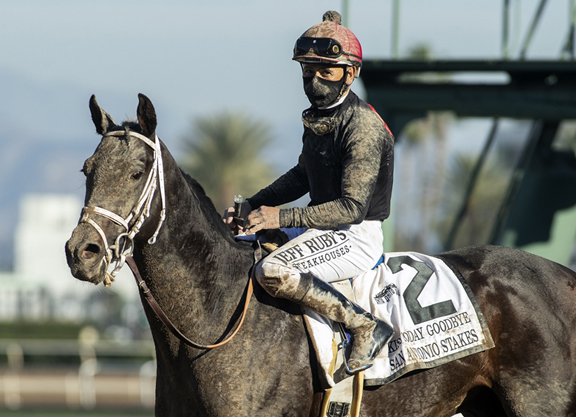 John Sondereker's Kiss Today Goodbye swooped to the lead in the dying strides to upset the field in the GII San Antonio S. at Santa Anita Saturday. The 15-1 shot settled at the back of the pack as heavy favorite Mucho Gusto (Mucho Macho Man) shadowed Take the One O One through fractions of :23.83 and :47.81. Mucho Gusto moved up to challenge the pacesetter from the outside at the top of the lane as Idol put in his bid along the rail. The three looked set to battle it out to the wire, but Kiss Today Goodbye unleashed a powerful late rally down the center of the track to just get on top in the final strides. Mucho Gusto tired late and settled for fourth in his first start since a fourth-place effort in the Feb. 29 Saudi Cup.

“I was impressed with his last race and I wasn't even riding him,” winning jockey Mike Smith said. “He ran by me in that last race. I thank [trainer] Eric Kruljac for the opportunity of riding him and for his great training job. The race was shaping up for him with the speed up front and when it came time to run, he took off. I just guided him around the track.”

Third behind Thousand Words (Pioneerof the Nile) in the Aug. 1 Shared Belief S. at Del Mar, Kiss Today Goodbye moved to the lawn to finish fifth in the Sept. 6 GII Del Mar Derby and fourth in the Oct. 18 GII Twilight Derby. He returned to the main track to win a one-mile optional claimer at Del Mar last time out Nov. 14.

“He was always very immature early on,” Kruljac said. “It just took him longer to get to where he is and I think he is really just beginning to mature. About four races back he got absolutely sandblasted and was basically eased in the race. I basically told Mike, 'He's better with the kickback, but it was a factor that day.' As you can see when Mike came back, he ate the dirt, the colt has put it all together and Mike gave him an absolutely perfect ride. The pace gods were on our side.”

Sondereker began owning racehorses in the early 2000s after retiring from a 40-year career in the financial industry. Kruljac credited the owner with the decision to run in the San Antonio.

“John said his sheet numbers were going up and up, and he is a numbers guy,” Kruljac said. “The horse has trained like that but as a trainer I look at the older horses and see what they have already done, I go, 'Oh my God, what are we doing?' But he was right. It sure set up well, and the two scratches helped.”

With some 20 horses in training in California with Kruljac, the owner made a big splash at the Fasig-Tipton Selected Yearlings Showcase when he purchased a filly by War Front (hip 248) for $625,000.