Cable Bay Fast Out Of The Blocks 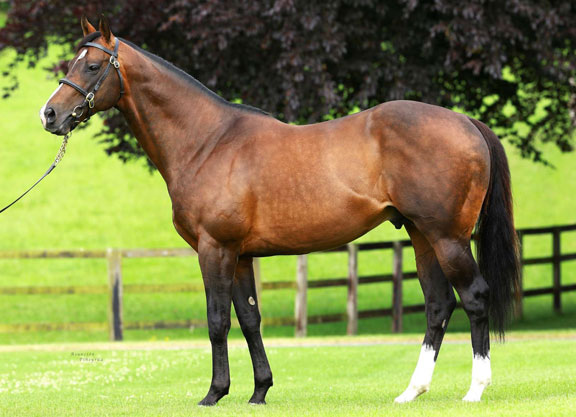 Cable Bay (Ire) entered stud with solid credentials, being a multiple group-winning son of Invincible Spirit (Ire), but it is safe to say that the Highclere Stud resident exceeded expectations with his first runners in 2019.

Cable Bay finished last season ranked the second-leading first-season sire in Europe based on worldwide earnings, siring 28 winners of 38 races. His progeny to date include the multiple stakes winner Liberty Beach (GB) and Ropey Guest (GB), who despite still being a maiden was placed six times in stakes company last year. Meanwhile Cable Bay’s highest earner was King’s Lynn (GB), winner of the £300,000 Weatherbys Racing Bank 2-Year-Old S. for his breeder The Queen.

Toughness and consistency were the hallmarks of Cable Bay’s own racing career, which was highlighted by a victory on his final start in the G2 Dubai Challenge S. at Newmarket for trainer Charlie Hills and he certainly seems to be passing on those traits, among others, to his progeny.

While Cable Bay’s emergence as a stallion of great promise may have come as a surprise to some, it certainly didn’t to Highclere Stud’s Jake Warren who, along with his parents John and Lady Carolyn Warren, was quietly optimistic the horse would make a big impression with his first runners.

“It’s always an incredibly nerve-wracking thing having a new stallion coming through but from the word go last season he impressed us the whole way through the year with his progeny,” Jake Warren said. “It wasn’t a total surprise as we had always been keen on his stock from early on. The foals were very well- balanced and strong and they developed into attractive, precocious-looking yearlings. That said he was a £6,500 stallion and that obviously put a limit on our expectations, but he has certainly punched above his weight and it has been very exciting so far and great for the stud.”

Despite a relatively low introductory fee for a well-bred, high- achieving son of sire maker Invincible Spirit (Ire), Cable Bay’s first yearlings were quite well received by the market, averaging £20,000, with his top-priced yearling in 2018 fetching £150,000. By the time the 2019 yearling sales came around his prowess as a sire had started to become obvious and that average price more than doubled to £47,000, while Highclere Stud sold the top-priced yearling so far by the sire when Mike Ryan bought a daughter of Tebee (GB) (Selkirk) for 320,000gns at Tattersalls October Book 1. His impressive results have unsurprisingly prompted a rise in Cable Bay’s covering fee for 2020, but Warren reports plenty of demand for the horse’s services at his new fee of £15,000.

“He is going to cover a full book of mares this year which is fantastic and obviously the quality of the mares that he will cover will be his best yet,” Warren said. “There are a lot of nice dams of stakes winners and high-performing race mares already booked in, and to be honest this will be the first time he has had that quality in numbers. We did send him some good mares early on but now that he has begun to prove himself the mares coming in this year will give him a great chance of continuing that success.”

Momentum really is an important component for a stallion to remain successful and there are plenty of examples of stallions who fail to replicate a good opening season or those whose stock don’t progress with age. Optimism stems from the fact that Cable Bay proved both progressive and durable on the track, saving one of his best displays until late into his 4-year-old season and these traits should help him in his second career.

“Cable Bay seems to do quite well with speedy mares, for example Liberty Beach’s dam was quite fast and when you put speed with him it does tend to really light up and do well,” Warren said. “He covered 123 mares in his second year and we sent him more of our own mares in year two than in his first year because we were so impressed with the first foals we saw. One of those mares was Tebee (GB), the dam of Hertford Dancer (GB) (Foxwedge {Aus}) who won the Listed Oaks Trial at Lingfield and was third in the G2 Ribblesdale S. at Ascot. We were well rewarded for our confidence in Cable Bay when that yearling filly made 320,000gns at Tattersalls last year. Also we have noticed a lot of his stock are now going to some of the more high-profile trainers so based on what’s out there at the moment and the mares he is set to cover, we are very hopeful of his future.

“I must add one of the highlights of last year was the victory of King’s Lynn at Doncaster. It was amazing for Her Majesty and he was fantastically trained by Andrew Balding. He knew King’s Lynn had a lot of ability but it was brave to put him in a race like that on his second start and he is a very exciting horse for this year.”

Highclere Stud also has a new stallion project for 2020 in Land Force (Ire). The son of sire sensation No Nay Never hails from an instantly recognizable and successful female family with his dam, the Group 3-winning Theann (Ire) (Rock Of Gibraltar {Ire}), not only the dam of the dual Grade I-winning mare Photo Call (Ire) (Galileo {Ire}) but is also herself a half-sister to Classic winner Halfway To Heaven (Ire) (Pivotal {GB}), who in turn is the dam of Magical (Ire) (Galileo {Ire}) and Rhododendron (Ire) (Galileo {Ire}). Land Force also comes with a smart race record on his CV, having won the G2 Qatar Richmond S. at Goodwood in 2018 following a slightly unlucky third in the G2 Norfolk S. at Royal Ascot. Like his barnmate Cable Bay, he too starts off his stallion career at a fee of £6,500.

“We’ve been bowled over by the interest in Land Force with a lot of people coming to the stud over Christmas and the New Year to see him, with him having been very well received at Newmarket in December,” Warren said. “He is going to cover a lovely book of mares and being such a fantastic looker himself and coupled with his precocious form and the No Nay Never factor, we have high hopes for him.”

Warren continued, “His Royal Ascot run was brilliant and then to back that up in the Richmond proved he was a top-class horse. We think he has the right combination of attributes to make him an attractive commercial proposition. We also put a lot of emphasis on the fact the female side of his pedigree is so strong. It’s one of the best out there and when you look at the stallion options in Europe there wouldn’t be many with a better page than him. We also feel we have priced him fairly and will be supporting him strongly with our own mares as well as promoting him strongly to British, Irish and French breeders.”

There is no doubt Warren will have plenty to keep him occupied in 2020, as apart from the management of the two stallions he is also involved with his father under the John & Jake Warren bloodstock agency as well as advising some select clients who keep their stock at Highclere Stud.

“We have a fantastic team here but also from a family point of view between myself and my mother and my father we all help each other out,” Warren said. “It’s an exciting time as we also have some fantastic clients at the stud including Sheikh Isa Bin Salman Al Khalifa from Bahrain who is developing a lovely portfolio of broodmares. We bought some beautiful yearlings for him last year, probably the most we’ve ever bought for him in any given year so it will be exciting to see how they get on this year on the track. He has some nice mares at stud including last year’s stakes winner Tapisserie (GB) (Le Havre {Ire}), who will be covered by No Nay Never this year. He has a small boutique operation but it is getting bigger.

“It’s a similar story with the likes of Simon Scupham of Bermuda Racing; he has nice portfolio of five or six quality mares including Queen Of Bermuda (GB) (Exceed And Excel {Aus}), who we bought for him at the breeze ups. She won the [G3] Firth Of Clyde S. and she will also visit No Nay Never this year.”

Warren continued, “Mike Morris is another fantastic client of ours. He’s a UK businessman who has a small team of mares here at Highclere and is producing some lovely stock. So when you marry all that up with the agency work for Highclere Thoroughbred Racing and the Royal Ascot Racing Club, it’s busy and exciting. But we’re also getting some good results for the clients which is the most important thing.”

While Warren’s career path has been well guided by some significant family connections, there is no hiding the drive and work ethic that is also required for a business to continue developing and moving forward. To be able to achieve that alongside one’s family is also something to be proud of.

“I guess like in any business, families in horse racing are really important,” he said. “We work together well and we work hard together and it’s great to have people close to you to bounce ideas off. I have a long way to go to live up to what my mother and father have achieved here but if I keep working hard hopefully I might get there.”