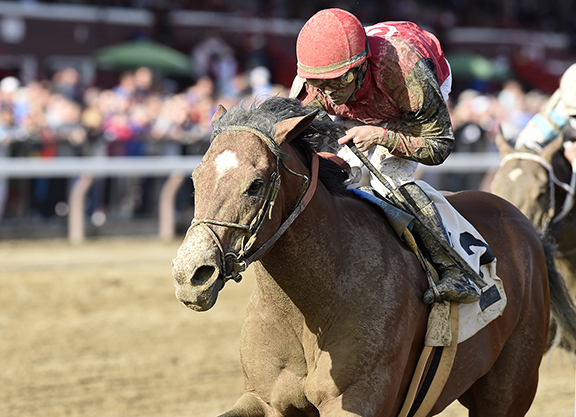 C Z Rocket (City Zip) will be looking to earn another automatic berth to the GI Breeders' Cup Sprint when he attempts to defend his title in the 'Win and You're In' GII Pat O'Brien S. at Del Mar Saturday night. The 7-year-old gelding has hit the board in all 10 starts–with seven wins–since being claimed for $40,000 last April. He earned his first graded score in last year's Pat O'Brien and followed up with a win in the GII Santa Anita Sprint Championship S. before concluding the year with a runner-up effort behind Whitmore (Pleasantly Perfect) in the Breeders' Cup Sprint. He has defeated that sprint champion twice this year, winning the Mar. 13 Hot Springs S. and Apr. 10 GIII Count Fleet Sprint H. He was second in the May 31 GIII Steve Sexton Mile S. at Lone Star and missed by just a neck after a wide trip when third in the July 31 GI Bing Crosby S. last time out.

Flagstaff (Speightstown) will be aiming to improve on his second in last year's Pat O'Brien for trainer John Sadler and jockey Joe Bravo. The 7-year-old gelding won the GIII Commonwealth S. at Keeneland in April and just got his head in front for a dramatic victory in the May 1 GI Churchill Downs S. He was most recently second in the June 4 GII True North S.

'TDN Rising Star' Eight Rings (Empire Maker), who captured the GI American Pharoah S. over the Del Mar oval as a 2-year-old in 2019, came up just a neck short when second in that blanket finish to the Bing Crosby. He comes into the Pat O'Brien off a pair of bullet drills, most recently going six furlongs in 1:11 4/5 (1/7) Aug. 22.