By The Moon Tiptoes on Front End to Ballerina Victory 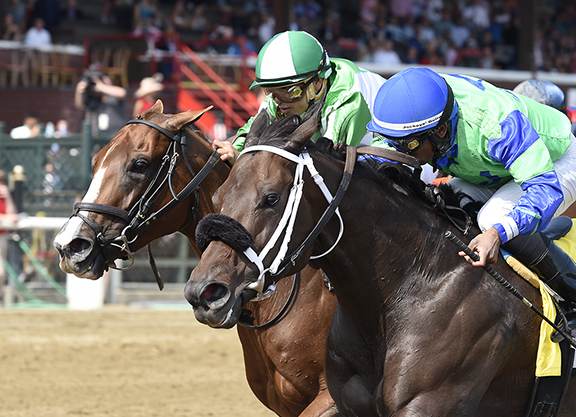 By the Moon | Sarah Andrew

By the Moon, heroine of the GI Frizette S. and runner-up in Saratoga's GI Spinaway S. at two, kicked off the current season with a close second in the seven-furlong GII Barbara Fritchie at Laurel in February before returning a winner next time in a sloppy renewal of Belmont's GIII Vagrancy H. over 6 1/2 furlongs May 5. Successfully defending her title in this season's GIII Bed O' Roses June 9, she had to settle for third–beaten on 3/4 of a length–after a wide trip in the six-furlong GII Honorable Miss H. here July 26.

Allowed to saunter through pedestrian opening splits while searching for her second Grade I win, last year's GI Ballerina S. runner-up remained ahead of her nearest pursuer Highway Star throughout and had enough left in the tank to win by a narrow margin.

“All the way down the backstretch I was really comfortable where I was,” said winning rider Rajiv Maragh. “I took a peek to my outside and saw that Highway Star was outside of me, so I definitely knew we were going slow because she doesn't have that much speed, so it made me feel really happy about where I was. I just wanted to be patient and not move until I had to, and down the stretch when I saw that they started coming at me and when I asked her she just gave me that kick that she has and she did the rest from there.”

As for a trip to Del Mar for the GI Breeders' Cup Filly & Mare Sprint, trainer Michelle Nevin said, “We just have to regroup and plan out our next couple of months and decide what way to do it best.”

By the Moon also has a narrow second in the 2015 GI Acorn S. at Belmont and third-place finish in that year's GI Test S. on her resume.

Multiple stakes-winning By the Light, a $190,000 FTIOCT yearling purchase by Jay Em Ess Stable in 2006 and runner-up in the 2008 GI Prioress S., is also responsible for a 2-year-old filly by Warriors Reward. While a yearling filly by Super Saver didn't survive, the 12-year-old mare produced a colt by Coolmore stallion Uncle Mo this year and was not bred back. Her 3-year-old colt by Tiz Wonderful hit the board in a pair of maiden special weight attempts at Belmont this spring.