Home » Archive » Shared News » By My Standards, War of Will Doing Well Sunday

By My Standards, War of Will Doing Well Sunday 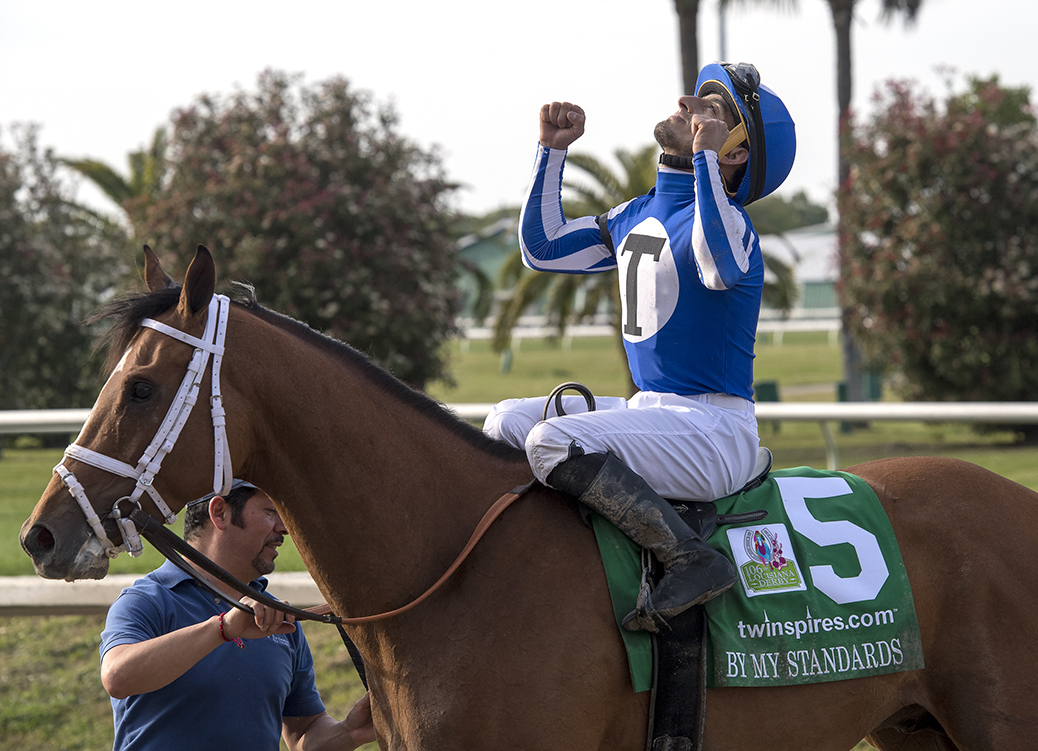 By My Standards | Sarah K Andrew

By My Standards (Goldencents) and War of Will (War Front), the upset winner and beaten favorite, respectively, in Saturday's GII Twinspires.com Louisiana Derby, were both doing well Sunday according to their trainers.

By My Standards will ship from Fair Grounds to Churchill Downs on Tuesday morning to prepare for the May 4 GI Kentucky Derby.

“Hopefully we'll get an easy breeze in 12, 13, 14 days,” said conditioner Bret Calhoun, who has never had a starter in the Kentucky Derby before. “He worked a little quicker up to this race than he had previously, so hopefully we can take it easy first work back then give him another easy one after that. Then we'll do a little bit more after that in the middle there. He's ready. We have to maintain what we've got. The Derby is a whole different deal. It's not just the race, it's everything that goes into going up there. We'll do a lot of stuff preparing him for that. He's got a great mind, we're lucky in that sense that he'll handle everything.”

Things did not go nearly as smoothly on Saturday for impressive GIII Lecomte S. and GII Risen Star S. War of Will, who took some awkward steps shortly after the start and was “significantly off” after finishing ninth, according to trainer Mark Casse.

Casse issued a more upbeat report Sunday morning, and said a start on the first Saturday in May was still a possibility for the Gary Barber colorbearer.

“It's amazing how much better he was today,” Casse said. “I just feel fortunate that he's okay first and foremost. We're fairly certain that he probably caught his patella a little bit right at the start. So what we'll do is we'll do some exercising and probably laser treatment to strengthen the patella muscle. But we feel optimistic that we can still make the Derby.”

War of Will will ship to Keeneland on Tuesday and remain under the supervision of Casse's assistant trainer David Carroll.

“We're going to change his exercise a bit for a while, just try to strengthen his patella ligaments,” Casse said. “It's something that as a trainer for 40 years, I've been dealing with patella ligaments since the beginning of my career, but I've never seen one catch like that one did. But the good news is he was happy this morning.”

GII Fair Grounds Oaks heroine Street Band (Istan) was also reportedly in fine fettle Sunday, while beaten favorite Serengeti Empress (Alternation) was fine after bleeding and being vanned off. Trainer Tom Amoss told the Fair Grounds press department that “no time table and no racing plans” had yet been made for the latter.