By My Standards Returns To Graded Company for New Orleans Classic 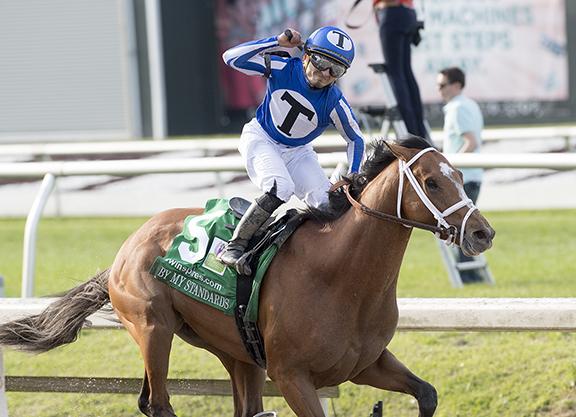 By My Standards | Sarah Andrew

On this program 12 months ago, Allied Racing Stable's By My Standards (Goldencents) belied odds of 22-1 to upset the GII Louisiana Derby. He'll be a fraction of that price and even of his 6-1 morning line when he makes his return to graded-stakes company in the GII New Orleans Classic S. at the Fair Grounds.

The bay colt overcame the widest stall in a field of 12 to break his maiden by better than four lengths last February and was prominent in the Derby before rallying late to score by 3/4 of a length. Sidelined after finishing 12th–placed 11th–in the GI Kentucky Derby, By My Standards resumed from a nine-month hiatus to wallop a field of a local allowance rivals by a handy six lengths at 1-2. He has trained brilliantly since as evidenced by a half-mile gallop in :47 2/5 (1/88) Mar. 14 and should take some beating.

Silver Dust (Tapit) has finished in the exacta in six of his eight local appearances and was runner-up to Core Beliefs (Quality Road) in this event last year. The grey, subsequently disqualified from an apparent 4 1/4-length victory in the GIII Louisiana S. Jan. 18, made it back-to-back wins in the Feb. 15 GIII Mineshaft H., defeating the re-opposing Gun It (Tapit) by three-quarters of a length.

The newest of new shooters is Fearless (Ghostzapper), a $725,000 Keeneland September purchase, who is making up for lost time. The 4-year-old opened his account at first asking in a six-furlong Gulfstream maiden Dec. 22, defeating Beau Luminaire (I Want Revenge), who returned to graduate by seven lengths going a mile in his next start. Stretched to two turns for his latest, Fearless stalked a solid pace, took over at will at the midpoint of the turn and was kept to task but was 8 1/2 lengths clear under the line. He gets tested for class Saturday.

This story was posted in Shared News and tagged By My Standards, Fair Grounds, Fearless, Horse Racing, Silver Dust.