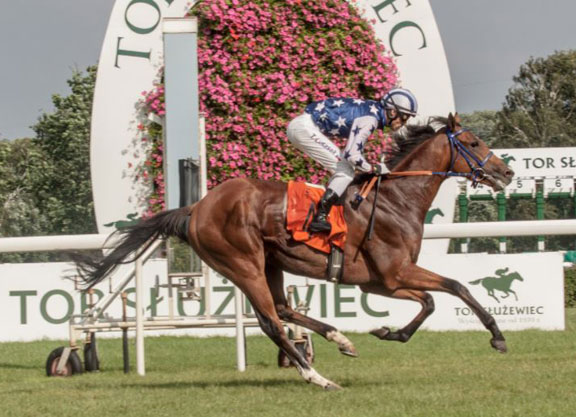 Confident that he was atop the best horse in the race, Tomas Lukasek put a supremely confident ride on hot favourite Bush Brave and the duo kicked away to post a dominating success in Poland's richest and most prestigious race, in all likelihood securing Horse of the Year honours.

Settled in third spot behind the tearaway early leader Velnelis (Ire) (Harbour Watch {Ire}), Bush Brave always traveled comfortably and was allowed to improve into second with approximately 700m to travel. Though he still had many lengths to find off the home corner, the Polish Triple Crown hero gradually reeled in the loose leader while barely asked for an effort, hit the front a furlong and a half from the wire and turned it into a one-horse affair from there.

Dam of a 2-year-old filly by Excelebration (Ire), who fetched €58,000 at the 2015 Goffs November foal sale, Moriches foaled a filly by Camacho (GB) in 2016 who was purchased for €7,000 as a GOFNOV weanling and who is cataloged as hip 259 at the upcoming Goffs Open Yearling Sale Oct. 24. Bush Brave's second dam Almaaseh (Ire) (Dancing Brave) produced Hong Kong Horse of the Year Military Attack (Ire) (Oratorio {Ire}). Bushranger, winner of the 2008 G1 Darley Prix Morny, originally retired to his breeding place at Tally-Ho Stud and was exported to Turkey in 2016. Bush Brave is the second Triple Crown winner in three years (Va Bank, 2015) to be sourced by Bobby O'Ryan at Tattersalls Ireland's September yearling sale. VIDEO