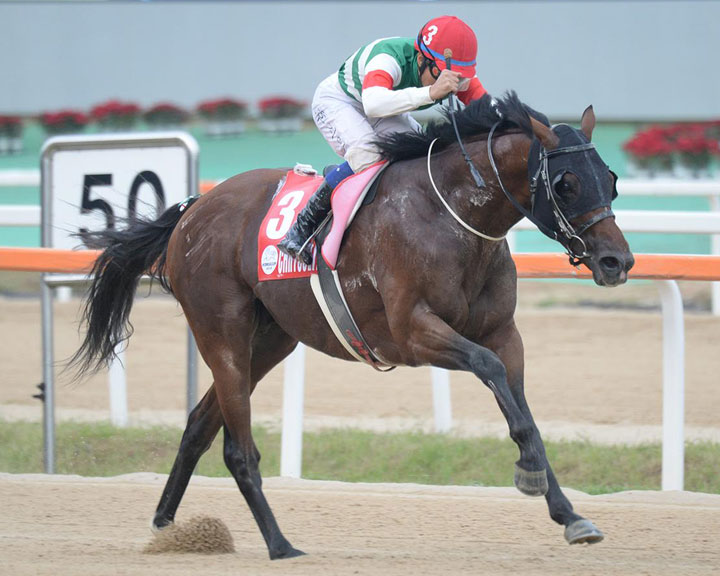 A total of 47 overseas entries from seven different racing jurisdictions have been received for the Keeneland Korea Cup (1800m) and Keeneland Korea Sprint (1200m), to be held at Seoul Sunday, Sept. 10.

Japan fields the largest contingent with 18 runners entered across both races, including Carrot Farm's Chrysolite (Jpn) (Gold Allure {Jpn}), who defeated his compatriot Kurino Star O (Jpn) (Admire Boss {Jpn}) by six lengths in last year's Korea Cup (video). Also among the Japanese entries is London Town (Jpn) (Kane Hekili {Jpn}), recent winner of the G3 Elm S. at Sapporo in track-record time. The American-bred Circuit Land (Mizzen Mast), who won his maiden over the Deauville all-weather in 2014 and has two wins and a second from three starts over the Sha Tin dirt track, could represent Hong Kong, while the lone entry from the United States is the Linda Rice-trained Papa Shot (Distorted Humor), whose two most recent appearances have yielded stakes placings in the state-bred restricted Saginaw S. (1700m) and John Morrissey S. (1300m).

Some 26 entries were received for the Keeneland Korea Sprint, including six from the United States, topped by the talented duo of Stallwalkin' Dude (City Place) from the barn of David Jacobson and Limousine Liberal (Successful Appeal), conditioned by Ben Colebrook. Group 1 winner and Tokyo track-record setter Moanin (Henny Hughes) and Dios Corrida (Jpn) (Kane Hekili {Jpn}), who made two starts at the Dubai International Racing Carnival, top eight entrants from Japan, while perhaps the most intriguing possibility comes from Ireland in the form of the globetrotting Gordon Lord Byron (Ire) (Byron {GB}), a veteran of 77 career starts and a Group 1 winner over turf sprint distances in England, France and Australia. Though he has never raced on dirt or sand, the nine-year-old is a three-time winner over the Dundalk all-weather. Super Jockey (NZ) (Sandtrap) took last year's Sprint for Hong Kong and that jurisdiction is represented by Lucky Year (Aus) (Holy Roman Emperor {Ire}), winner of eight of his 22 runs at home, but untried on the main track.

Singapore's El Padrino (NZ) (Mr Nancho {Arg}) annexed the Sprint in 2014 (then called the Asia Challenge Cup) and was runner-up in 2015 and the nation is represented by a half-dozen nominees this year. Should he handle the switch to the dirt, China Horse Club's multiple stakes-placed Wimbledon (Aus) (Snitzel {Aus}), a latest second in the Aug. 13 Garden City Trophy (1200m AWT) at Kranji, could return the trophy to the Lion City.