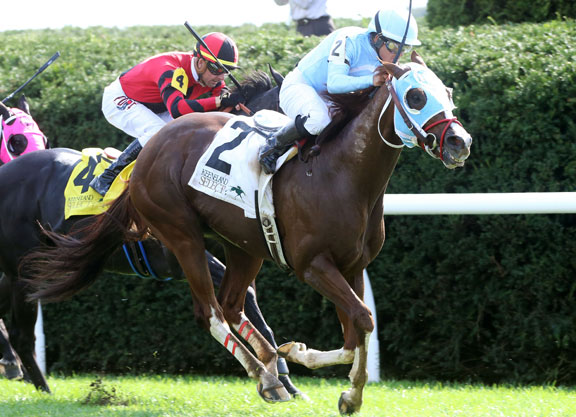 Bucchero (Kantharos–Meetmeontime, by General Meeting), whose 11 career victories included back-to-back victories in the GII Woodford S. at Keeneland, and who will enter stud at Pleasant Acres Stallions in Florida in 2019, will be available for inspection to those attending the November sales this Sunday, November 11, from 3-5 p.m. at KESMARC Kentucky, located about five minutes west of the racetrack at 258 Shannon Run Road in Versailles.

The first son to stud for the young and very promising Kantharos, Bucchero ran a ThoroGraph 4 to break his maiden at second asking and was a four-time stakes winner in Indiana-bred company before breaking through with a 1 3/4-length defeat of a field that included former GI Breeders' Cup Turf Sprint winner Mongolian Saturday in the 2017 Woodford.

He carried his top form into his 6-year-old season, with placings in Keeneland's Grade II Shakertown S. and the Grade III Turf Sprint S. before accepting an invitation to the Group 1 King's Stand S. at Royal Ascot. A gallant fifth, beaten under five lengths, in that world-class event, he returned for a fall campaign that included a popular repeat success in the Woodford, earning a return trip to the Breeders' Cup in the process. During his career, Bucchero defeated 24 different graded stakes winners, including champion and $7.5-million seller Lady Aurelia on two separate occasions.

Campaigned by Ironhorse Racing Stable LLC and trained by Mike Trombetta and for the bulk of his career by Tim Glyshaw, Bucchero retired as the leading Indiana-bred earner in history and bankrolled in excess of $947,000, with seven black-type victories from 5 1/2 furlongs to a mile and a sixteenth. His close relative World of Trouble, also by Kantharos and out of a half-sister to Bucchero, earned a towering 118 Beyer Speed figure in just missing to Stormy Liberal in last weekend's Turf Sprint at Churchill Downs.

The stallion show is open to the public and those in attendance will be entered into a drawing to win a free season to Bucchero for 2019. Refreshments will be served. For additional information, visit www.buccherostallion.com, Buccherostud">@Buccherostud on Twitter or call 646.789.5162.