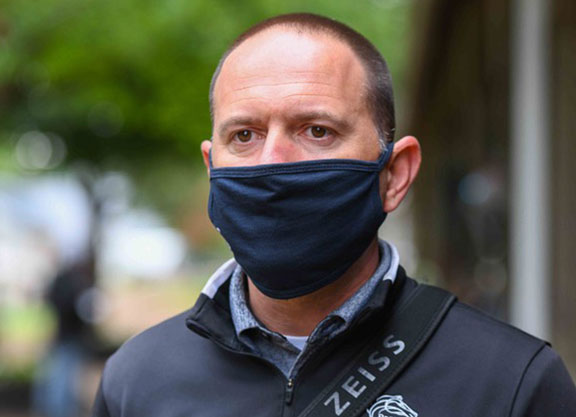 SARATOGA SPRINGS, NY–While most everything looks and feels different at spectator-less Saratoga Race Course this summer, trainer Chad Brown has maintained standard form. Brown has won three of the last four meet training titles–in 2019 by a whopping 20 victories over Todd Pletcher–and led the standings through the first four days of the 40-day season.

It is pretty much standard Saratoga stuff for Brown, 41, who grew up about 17 miles away in the small city of Mechanicville and was schooled in the sport at the historic track. Brown won with six of his first 16 starters this meet and his in-the-money figure was a eye-catching 81%. Three of the wins came in stakes, starting with Country Grammer's score in the GIII Peter Pan S. on opening day. Country Grammer is headed to the Aug. 8 GI Runhappy Travers S., a race that Brown has often said is more important to him than the GI Kentucky Derby.

After completing an interview and heading toward the Oklahoma training track to watch a set of his horses train Wednesday morning, Brown laughed, threw his arms into the air and said, “What if I win the Travers and nobody is here? I might have to retire.”

Brown is a long, long way from calling it a career. He is the three-time defending Eclipse Award winner as outstanding trainer and picked up his 100th career Grade I victory in June. At Saratoga, where he won with his very first starter in 2008, he has 329 victories.

Saturday, he sends out 2018 female turf champion Sistercharlie (Ire) (Myboycharlie {Ire}) in the GII Ballston Spa S. It will be the first start for Peter Brant's 6-year-old mare since she finished third as the 4-5 favorite in the GI Breeders' Cup Filly & Mare Turf in November at Santa Anita.

“She's just a special horse,” he said. “We have a great team working with her. She's a very special individual talent. She shows up whenever we run her, particularly off a layoff and at all different distances. We're excited to get her back racing.”

Since she was imported in 2017, Sistercharlie has won seven Grade I races in 10 starts for Brown and has never been worse than third.

“She's not a difficult horse to train,” he said. “She's very straightforward. She's all class. We're not doing anything miraculous with her. We set the proper schedule for her and she goes ahead and she does what you ask her to do.”

With his deep personal connection to the region, Brown understands the impact of the rules put on place during the COVID-19 pandemic that have kept the popular track eerily quiet. He started a program on his Twitter account to give away some of his branded merchandise. The challenge for opening weekend was to correctly select the stable's total of winners. A drawing was held to determine which one of the 44 people who guessed six would receive the prize.

“I feel really bad for the local fans,” Brown said. “Not only my family and friends, but people I don't know who might yell at me at the races. To be up here prior to the meet and seeing different fans outside the gate trying to watch training when you are pulling in and out of the gate is really something to see.

“It really shows you how much this meet and horse racing in general means to the community. It really means something to me to see that. It's what got me into the sport as a local fan growing up here and wanting to get into the sport. I see people of all ages outside the gate during training. I wish I could do more. Giving away some hats and masks is a small thing to do, but I am thinking of different ways to try keep people's interest in what we are doing here. I hope everybody still follows the meet closely. Even if, unfortunately, they are not allowed to come in the entire meet–and I hope that's not the case–that everyone is back here next year in the same numbers and people don't lose interest in the sport or this meet in particular with the year off. ”

Brown said the stable gear was ordered for his 250 employees then he decided it would be nice to spread some of it around through social media.

“It's not hard for us to do it,” he said. “Obviously, we are very busy, but we're trying to sort of recognize the individuals that I am speaking about, who are either outside the gate here or who can't come to Saratoga but are still watching religiously from afar and are following our meet and the sport. We're going to try and do it, but we're also running the meeting. But we're trying. ”

Brown said he is pleased with how his stable got rolling early at the Spa.

“I think that is always important, particularly for this meet,” he said. “For any meet, or any major weekend of racing when you have a lot of starters, if you can get off to a good start it puts everybody in a very focused, composed manner to continue to execute their jobs.”

Despite his success at Saratoga, Brown said that he doesn't take anything for granted and maintains a business-as-usual philosophy.

“We're taking the same approach that we always have here: day to day and week to week,” he said. “We have nice horses each week coming up to run in all types of different spots. My team, so far, is doing what they have been doing for a long time, executing our plan.”