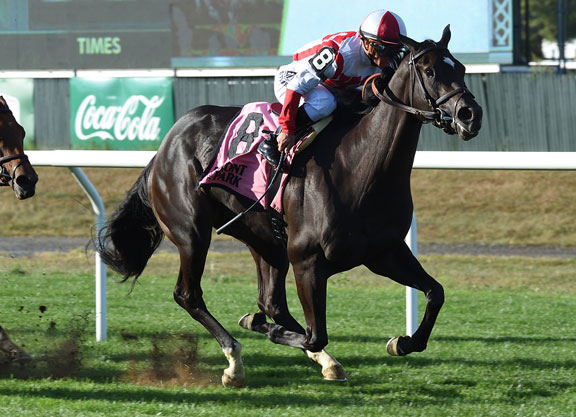 Chad Brown continued his dominance of the GII Miss Grillo S. Sunday at Belmont, as Klaravich Stables' Selflessly took charge in the final furlong and held on late to give Brown his seventh win in the last eight renewals of the juvenile turf filly feature.

Flying late to just miss when second to re-opposing stablemate Jazzique (Ire) debuting in a Saratoga turf sprint Aug. 28, the $190,000 KEENOV grad was made the fifth choice stretching out in this spot and broke sharply from her outside stall. Angling over into the two path to stalk dueling leaders from third behind fractions of :24.47 and :48.84, the dark bay advanced three wide on the far turn alongside her stablemate and poked her head in front outside the eighth pole. Edging away past the sixteenth marker, she had enough to hold off the late charge of favored Crystalle to prevail on the wire. Jazzique held third.

“I think stretching out and the experience from that first start were the keys here,” said Brown. “:She ran a really good race on debut and was unlucky not to win. She galloped out well in the race and she has really done everything right since her debut. With these 2-year-olds, we get them started when they're ready and let them come along at their own pace. She came into this race really training well, and I just treated the debut as if she won.”

On supplementing Selflessly, who is not nominated, to the Breeders' Cup, Brown said, “I think so. We'll talk to the owner about it, but if she comes out of the race sound and doing well I'd be inclined to go.”

Pedigree Notes:
Selflessly, the 196th stakes winner and 89th graded stakes winner for her 22-year-old sire, is the second foal to race out of 9-year-old Uniformly Yours, following MSW Enchanted Ghost. She shares a second dam, Faux Pas (Ire), with MGSW River Seven (Johannesburg). Faux Pas is a half-sister to English champion juvenile Negligent (Ire) (Ahonoora {GB}), who produced a pair of European GSWs as well as the dam of four-time G1SW Sky Lantern (Ire) (Red Clubs {Ire}). Uniformly Yours, a $100,000 purchase by Nursery Place at the Fasig-Tipton Winter Mixed Sale in 2014, has a yearling Honor Code filly who sold for the same sum to Jay Em Ess Stable at Keeneland September and a Kitten's Joy colt foaled Apr. 4. She was bred back to the latter sire.