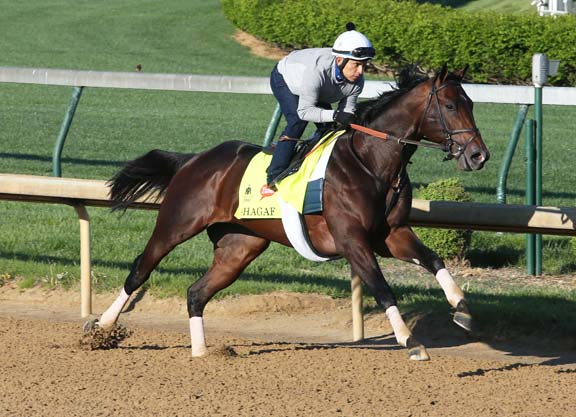 Trainer Chad Brown sent his two GI Kentucky Derby hopefuls, My Man Sam (Trappe Shot) and Shagaf (Bernardini), out to work Sunday morning at Churchill Downs. My Man Sam, coming off a late-closing second behind Brody's Cause (Giant's Causeway) in the Apr. 9 GI Toyota Blue Grass S., worked a half-mile in company in :50.60, galloping out five furlongs in 1:01.20 and six furlongs in 1:14.60.

“It was just a maintenance work, he worked early this morning,” Brown said of My Man Sam. “I thought he worked terrific. He's only run in one stakes race and he ran terrific from the 14 post in the Blue Grass. We were lucky enough to get up for second and have the points to get up and be in this position. [He is] a rapidly developing horse with a lot of talent that should be able to get a mile-and-a-quarter.”

Shadwell Stable's Shagaf, who suffered his first career loss when fifth as the favorite in the Apr. 9 GI Twinspires.com Wood Memorial, went a half-mile in :48.40 (video). He galloped out five furlongs in 1:01.20 and six furlongs in 1:14.60.

“We worked [Shagaf] by himself for the first time,” Brown said. “He's been getting a little aggressive in his works. I thought he went terrific. I was just so thrilled in his work. He's a little bit better of a work horse. He went over the surface well and galloped out strong.”

Of Shagaf's effort in the Wood, Brown reflected, “The whole situation didn't really work for him. First of all, the racetrack just wasn't for him. It rained all day and he had only run on dry tracks. He didn't really break well in the mud. He tried to make a run there in the final turn and ran into some horses in front of him and had to stop. As you can see here this week, he's a huge horse with a big stride. He's like a big locomotive going downhill. I'm not sure how much stopping you can do with a horse like that when you have his momentum going. It's just one of those things that happen in horse racing sometimes, but the track was dry today and he worked terrific.”

Asked to compare his two Derby hopefuls, Brown said, “They really are [different], and as they have developed, we adjust their training. Shagaf is just a bigger, stronger and more willing work horse, so we sent him alone today and it was the best he has ever worked in my eyes. My Man Sam is a horse who appreciates some company. He's never been real flashy in the morning, but that's exactly how he works when he runs well. It was just an easy maintenance work. He galloped out strong.”