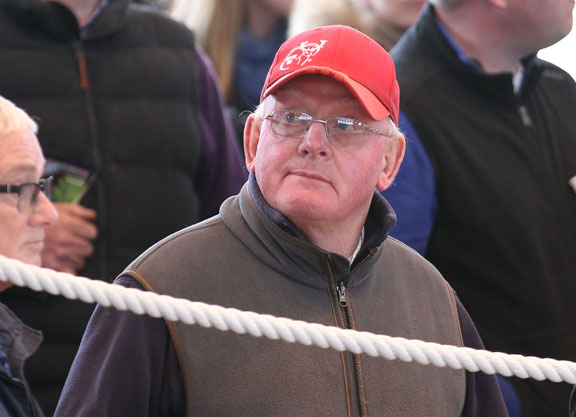 Willie Browne was already on the plane when he got the call.

The airport couldn't be handier, just over the road from Keeneland as it is. Even so Browne had run out of time, and been obliged to head across before Hip 2169 took his turn at the 2016 September Sale. But his compatriot Jim McCartan had liked the colt too. And now he was calling from the back walking ring.

“We've a problem here,” said McCartan. “This horse is a cribber.”

Some 18 months later–back home in Co Tipperary, just next to Coolmore–Browne shakes his head as he recalls one of the most momentous conversations in 40 years of passing young horses through the sieve of his instincts, as both stockman and trader.

“That was the first we knew of it,” he says. “Up till then I'd say we might have been ready to give 60 or 70 grand for the horse. If you come up from a National Hunt background–and that's where we started–you want them to fill your eye. And he's a big, substantial horse. But there was I, over in Bluegrass [Airport], and he's a cribber.”

Forty years, during which he has become the doyen of a trade that didn't really exist when he started. The first European breeze-up sale, at Doncaster in 1977, was conceived largely as a clearing house for horses that had fallen through the cracks as yearlings. As Browne recalls, Tally Ho was the only other outfit that saw the potential straightaway. Nowadays there are dozens of consignors trying to make it pay, polishing up rough-diamond yearlings into ready-to-run juveniles. But it is still Browne whose example they follow; still Browne, whose five steep furlongs of woodchip they borrow to hone their horses for the sales.

The day before TDN's visit, no fewer than 95 outside horses had been boxed over to join his own string at Mocklershill. One consignor was making a five-hour round trip from Co Kerry for the fourth morning running. Yet the biggest touch of the lot, a story to sustain them through the darkest, coldest feed rounds of the winter, was contingent on the luck–the sheer vagueness and fatalism–of what Browne agreed with McCartan next.

Cheap? What did that mean? Where would they have left him, this cribber by a sire who had been unable to keep his old Kentucky home?

“That's a good question,” shrugs Browne. “I would have guessed if we went over 20, maybe?”

As it was, the colt—culled by the same farm that had exported his father Street Sense to Japan—was theirs for $15,000.

“The sire was cold, I suppose,” Browne says. “They had shipped him off at that stage, and then he started showing signs that maybe they'd got rid of the horse too soon. Of course he has gone full circle since, he's back in fashion now.”

Just seven months later Browne and McCartan sold the son of Street Sense for €1.4-million at the Arqana Breeze-Up Sale. The purchaser was Kerri Radcliffe, for Phoenix Thoroughbreds; and while those two parties have since gone their separate ways, the horse himself (as Walk In The Sun) has won both his first starts. Browne doesn't want any numbers repeated, because it is no longer his business; but he understands that the owners have turned down a hefty profit even on what they paid in Deauville.

“He trained probably as good as I've ever had,” he says. “He looked huge, like he shouldn't be quick. But he was. I'd been touting him for weeks before Deauville. And he did a fantastic breeze, there was only one horse quicker all day.”

With his white hair and a penetrating eye behind his spectacles, Browne has something of a barn owl about him as he settles over his tea in the stable office. He gestures towards the gallops. “Sometimes, of course, you're very happy up there,” he says. “And then on the day you're let down. But everything gelled with that horse. The strangest thing was that Darley sold him for 15 grand, and Fergie [John Ferguson, then still Sheikh Mohammed's bloodstock manager] bid 850 for him. In fairness, you have to say they're not small-minded people. Okay, they sold him. But they were prepared to do something about it.”

The big players' interest in a Mocklershill horse is testimony not only to their faith in Browne's opinion–vouchsafed with reliable candour–but also to his own adaptability. Because the obsession with times has become such that even the most respected horseman of the old school will not get full value for a horse who puts in a mere breeze, when everyone else is gunning for something closer to a tornado.

Browne was filled with admiration by Niall Brennan's recent stand, in TDN, over the enslavement of the American market to the bullet breeze. Browne, likewise, admits that much of the pleasure has gone out of the game since the arrival of the clockers on the European scene. But the fact that Mocklershill remains an undiminished force in the market suggests that even Browne has had to compromise.

With a sheepish look, he reluctantly draws from his pocket Exhibit A: a stopwatch. “Actually I put in a timing system some years ago,” he admits. “It was quite elaborate. Worked from a satellite in the sky. But when you did your breeze, you had to put certain equipment on the horse. And when jockeys saw that, the whole game changed: they were more revved than the horses. So I only did it for two years. It wasn't any good for the horses. So now, secretly…” He sighs, and restores the gadget to his pocket. “Listen, it's not an exact science. And I half judge it with my eye. But if then you look at your watch, and it matches up, it gives you that little second opinion.”

He still considers himself a traditionalist and would be nervous of the legacy risked by those giving horses more of a powder-keg preparation. Even the more temperate approach, after all, will expose any mental fragility in some animals.

“But to be fair to them, those horses that do the fast breezes—they do tend to go on, despite being 'gunned',” he says. “I suppose we're living in different times, you know, there's probably more pressure everywhere. That the whole thing is governed by the clock, it doesn't sit easy on me. To get this breeze time, you have to do stuff you'd prefer you didn't have to. But remember you'll have the same carry-on if you go to a racing stables. The biggest thing in a racehorse is his mind. Whatever his ability, if you can't cope mentally you're in trouble anyway.

“There are so many ways of doing this. But [the overall model] does work. You go to the better tracks in England, from August on, and every second horse in the maiden is a 400 grand, 500 grand yearling. If I sell a horse for 400 grand, I want it to work out well! So many of those expensive yearlings never do anything. Yet everyone's very quick to jump on the bandwagon where the breeze-ups are concerned.”

Browne has earned the right to have his opinion heeded, whatever the clock might say. True, he finds that people visiting his barn at the sales sometimes hand the list straight back to him and ask him to pick out the viewings instead. That can be awkward if he has a couple of dozen lots to move on. At the same time, all the airy talk you hear among buyers–to the effect that the clock is just one factor among many–is simply not matched by deeds.

“People will listen to a degree,” Browne says. “But when they get the timesheets… I had a filly last year in Doncaster, I think she was half a second, maybe six-tenths off the best one. And would you believe she was 41st on the list. I was very happy with her breeze but if you have to go right down there to find her, and you don't know your stuff…”

Sometimes, mind, it pays to go against the crowd. His Deauville coup, for instance, rewarded his unswerving faith in the American Thoroughbred. With Mark Dwyer, a regular collaborator, he will reckon to see 60% at Keeneland from Book 2 through to the second week. That is some amount of legwork for a septuagenarian, even one with a 9-year-old son to keep him on his game. But he is puzzled that most Europeans rely on the breeze-ups as an import agency.

“Somewhere in the middle there, American horses went out of fashion,” he says. “But I think that wheel is on the full cycle now. And even though Keeneland is the most competitive market in the world, there's still better value there than at most of the European sales. You just have to work at it.”

Browne–like Dwyer, and so many other breeze-up consignors–learned the ropes with steeplechasers. His father rode in several Grand Nationals, and they were trying (not terribly successfully) to scrape together a few quid, buying and selling jumpers, when the Doncaster experiment gave them a new option.

“No doubt about it,” Browne says. “National Hunt people know their horses. I'd be very much into conformation; I love a good walk, a good hindleg. But at the end of the day, if you're looking for a real good horse, pedigree is what matters. When people come to me at the sales, it's always the big sire on your door they go to first. The mare never gets enough credit. For me she's 75% of the whole job.”

“If you go back 10 years, before time became such a factor, I would have been as brave as anyone to go in and buy a yearling. I'd give 200 grand if the horse had the looks and the pedigree. Because if you had a good individual and he went up there with a good action, at the worst you're going to get your money back. But now if you give 200 or 400 for a horse, and he does a poor time, you've lost everything.”

If that means you sometimes have to buy a cribber, demonstrably that isn't always a bad thing. A significant portion of his Deauville profit was ploughed into relaying the woodchip. And it wouldn't have taken long to get through the rest, with over 90 horses in his latest intake.

Lest we forget, the only man to sell a seven-figure breezer in Europe before Browne at Deauville was–Willie Browne. When he draws attention to the framed newspaper headlines, however, it is with the very opposite of complacency.

“See that there?” he says, pointing. “To be honest, I'd prefer to train a winner of a small race in Dundalk than to do that. Because there's so much satisfaction out of it. It's a magical feeling, training a winner. You get up in the morning, and he's still there; it's your project and it's worked. I do train the odd one. Three at the moment. But if you're a pinhooker you've got to be a pinhooker. If you start keeping some back that you like, you can't make the rest of it credible.”

“Ninety horses is too many. I'm no spring chicken. How long I can stay at it, I couldn't tell you. There's nothing better around for me anyway. As I say, the enjoyment left it slightly when the times came in. Anyway that's how it is. It's a great game, and we've had great fun at it.”