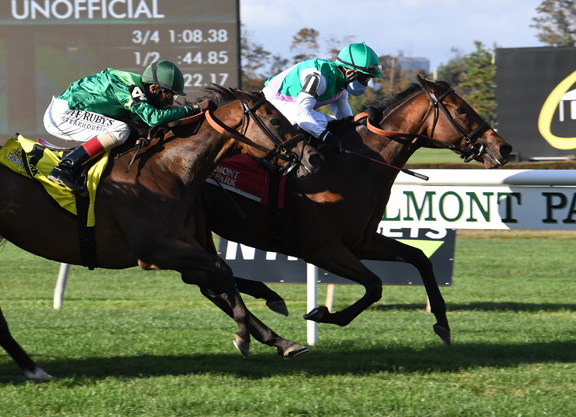 Trainer Chad Brown will saddle half of the six-horse field in the GII Ballston Spa S. at Saratoga Saturday. Brown's trio is led by GI Matriarch S. winner Viadera (GB) (Bated Breath {GB}). The 5-year-old mare opened her stateside campaign with a fourth-place effort in last year's GIII Intercontinental S. before culminating a three-race win streak in the Matriarch last November. In her lone start this year, she was a troubled fourth in the Aug. 8 De La Rose S.

“She had a lot of trouble last time, but she got something out of it and hopefully can move forward off short rest,” Brown said of the Juddmonte homebred.

Kalifornia Queen (Ger) (Lope de Vega {Ire}), a group winner in her native Germany last May, captured her first U.S. victory in a Belmont optional claimer over the Ballston Spa's 1 1/16-mile distance June 13 and is coming off a late-closing second in the nine-furlong GIII Matchmaker S. at Monmouth Park July 17.

“She ran great last time. Cutting her back and taking the blinkers off have done her well,” Brown said of Kalifornia Queen.

Brown's Ballston Spa trio is completed by Tamahere (Fr) (Wootton Bassett {GB}). Winner of last year's GII Sands Point S. at Belmont Park in her U.S. debut, the 4-year-old filly opened 2021 with a runner-up effort in the Apr. 10 GI Jenny Wiley S. at Keeneland. She was a well-beaten ninth in the June 5 GI Just a Game S. and is coming off a runner-up effort over the Ballston Spa's course and distance in a July 28 optional claimer.