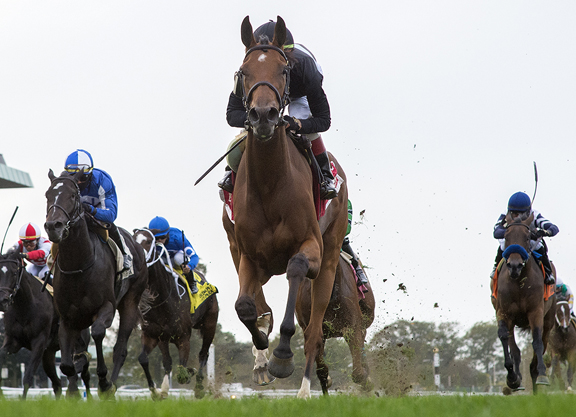 As of now, the only trainer to win four straight renewals of the GI Coolmore Jenny Wiley S. at Keeneland is the late Hall of Famer Bobby Frankel. Saturday, Frankel's future Hall of Fame protege Chad Brown will have a chance to equal his feat with a pair of contenders in the 1 1/16-mile turf test.

Capturing the Jenny Wiley with Sistercharlie (Ire) (Myboycharlie {Ire}) in 2018 and Rushing Fall (More Than Ready) in 2019 and 2020, Brown will be represented by Tamahere (Fr) (Wootton Bassett {GB}) and Etoile (Fr) (Siyouni {Fr}). The former punched her ticket to America with a dominant score in the Prix la Sorellina at La Teste Buch and impressively annexed the GII Sands Point S. in her North American debut before running sixth as the favorite in the GI Matriarch S. The latter, beaten less than a length when fourth in the G1 Prix de Diane Longines in June of 2019, failed to find the mark in her first two North American tries before breaking through in the GI E.P. Taylor S. when last seen Oct. 18 at Woodbine.

The morning-line favorite is Godolphin's Micheline (Bernardini). Scoring a 17-1 upset by open lengths in the Honey Ryder S. last spring at Gulfstream, the homebred was off the board in her next two before getting up late to take the Exacta Systems Dueling Grounds Oaks at 10-1 Sept. 10 at Kentucky Downs. She's kept up that good form with a second at 11-1 in the local GI Queen Elizabeth II Challenge Cup S. and a conquest of the GII Hillsborough S. last out Mar. 6 at Tampa.

“I really didn't feel like I had her completely tight for the Hillsborough coming off a layoff,” trainer Mike Stidham told TDN's Katie Ritz. “In my mind, I thought maybe I was a work or two short of having her totally cranked up for that race. So the way she ran was really impressive to me, knowing what I had in her. Since that race, she's come back and worked a couple of times and her last work [Apr. 2], in :47 [1/5] was a really, really good work for her because she's not a huge workhorse. For her to work like that, she was touting me that she's sitting on ready.”

Rounding out the major challengers is Juliet Foxtrot (GB) (Dansili {GB}). A dual graded stakes victress, she looks for a belated top-level success after placing four times in Grade I company, including when third in this race last year.