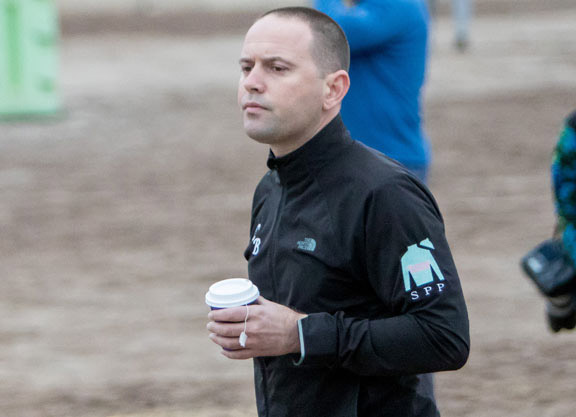 Chad Brown sends out a pair of strong runners in Saturday's GIII Soaring Softly at Belmont in Africa (Fr) (Dabirsim {Fr}) and Brattata (More Than Ready). Never off the board in her first three starts in France last summer, Africa finishing sixth when stretched to 1 1/16 miles for the GIII Miss Grillo S. in her first start on these shores in Belmont's GIII Ms. Grillo S. Oct. 1. She kicked off this term with a head second in Aqueduct's Mizdirection S. Apr. 15 and should improve off that effort here.

Brattata hit the board in her first four outings, but did not earn her diploma until her fifth try going 7 1/2 furlongs at Gulfstream Feb. 4 and was a respectable third last time behind MGSW Thewayiam (Fr) (Thewayyouare) in the GIII Herecomesthebride S. Mar. 3.

Wesley Ward can never be counted out in a turf sprint and he saddles two here in Nootka Sound (Lonhro {Aus}) and Mentality (Freud). An optional claimer winner in Hallandale Jan. 28, Nootka Sounds finished second by just a half-length when facing males in Aqueduct's Bridgetown S. Apr. 14. Third in a state-bred allowance Oct. 18, Mentality completed the superfecta in the Mizdirection. The pair breezed in unison over the local turf course May 6, firing a half-mile bullet in :46 3/4 (1/14).

Another worth a look in this test is the Jimmy Jerkens-trained Elevenses (More Than Ready), who enters off a pair of good-looking victories sprinting on the dirt at Gulfstream, most recently taking the Any Limit S. Mar. 24. The main question facing the dark bay, who is three-for-four lifetime, is whether she will take to the grass, but with the week's constant rain expected to continue through the weekend, she may end up on the dirt after all.