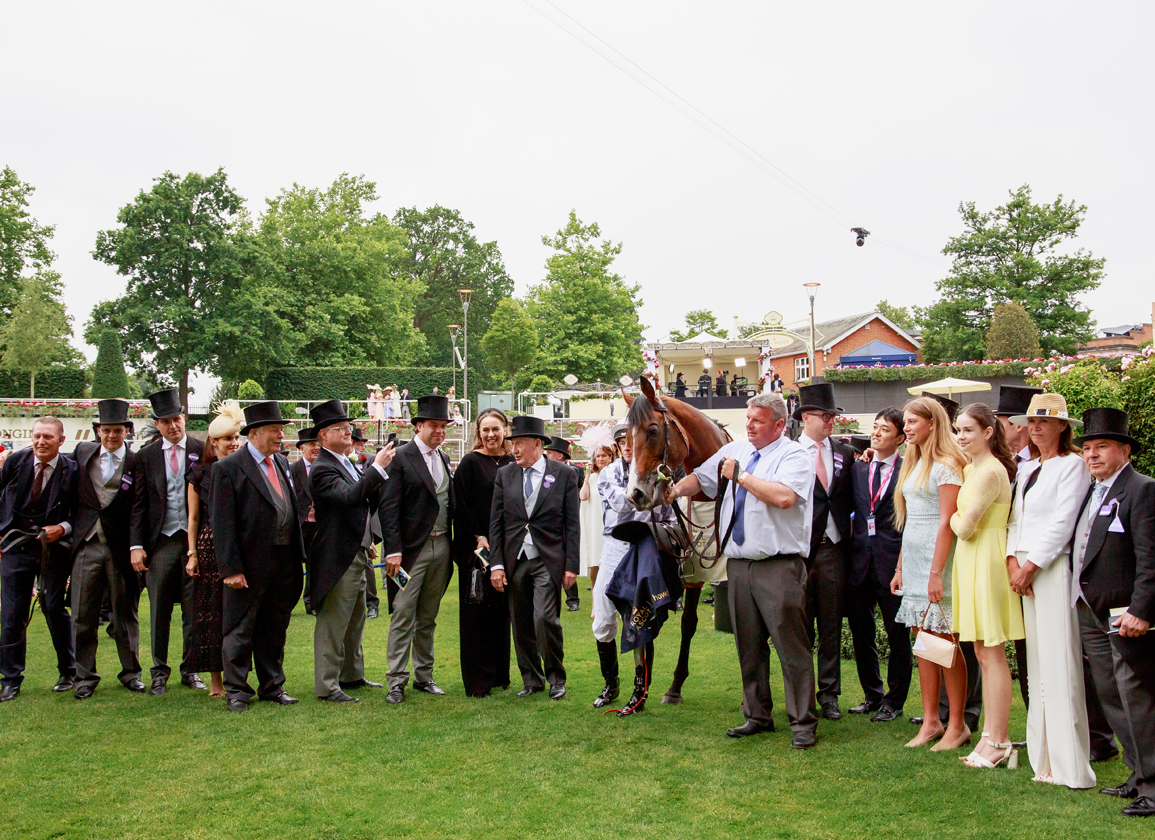 Broome was welcomed back by his many connections after winning the Hardwicke | Racingfotos.com

With the scene set on the final day of Royal Ascot, Saturday's G2 Hardwicke S. produced the inevitable as Broome (Ire) (Australia {GB}) conjured a 900th group win for Aidan O'Brien. Ryan Moore was the sorcerer once again, as the meeting's leading rider pulled off a front-running tour de force on the 6-1 shot who had already contributed five to that awe-inspiring tally. In many ways, last year's G1 Grand Prix de Saint-Cloud hero and Breeders' Cup Turf runner-up is a fitting horse to bring up the milestone, typifying the honed resolution and hardiness that is the trainer's great trademark. Kept wide initially before crossing over to head off the rest, he had the 8-11 favourite Hurricane Lane (Ire) (Frankel {GB}) in attendance but by the turn for home Godolphin's re-emerging Irish Derby, St Leger and Grand Prix de Paris hero was in trouble. Striding with zest and purpose to the line, the six-year-old who sports the Masaaki Matsushima silks had 3 1/4 lengths to spare over Mostahdaf (Ire) (Frankel {GB}), with Hurricane Lane perhaps finding this too hot on his comeback 1 1/4 lengths away in third.

“We are so privileged to be in the position we are and are so grateful to everyone at Ballydoyle, to John and Sue, Michael and Doreen, Derrick and Gay and Georg and Emily,” O'Brien said in his time-honoured deferential style, before turning his attention to the jockey. “Ryan has done an incredible job on Broome and it was a brilliant ride,” he added. “He is a six-year-old horse now, but the strange thing is he seems to be coming to the peak of his career. He has a very high cruising speed and does not surrender. We think we will see the best of him this year.”

O'Brien's contention that Broome is reaching an apex is borne out by the fact that most of his recent performances have been in the last 12 months, with a second to Wonderful Tonight (Fr) (Le Havre {Ire}) in this preceding his Saint-Cloud highlight and his stirring effort at Del Mar, where only Yibir (GB) (Dubawi {Ire}) could suppress him. Only 11th in the G1 Japan Cup, he was a well-beaten fifth in the G1 Tattersalls Gold Cup at The Curragh May 22 but his trainer revealed he had excuses. “When he was getting unsaddled after the Japan Cup, a horse walking by kicked him and fractured a shin,” he explained. “He was off for a long time. He just had the comeback run in the Tattersalls Gold Cup and finished fifth behind all those good horses. We will be thinking about something like the King George back here.”

“Broome has been brilliantly prepared–he was a different machine to what I've known before,” Moore said. “He was in a beautiful rhythm and stretched out excellent. He was really good today–he just flowed and lengthened. We always thought a lot of him–he was close to winning a Derby and a few things haven't gone his way. Aidan had him in a place to do that today.”

Mostahdaf was up to this trip for the first time and saw it out strongly, giving John and Thady Gosden options now. Gosden Jr said, “Ryan gave Broome an exceptional ride from the front–probably the best ride I've seen this week. He got loose, but Mostahdaf ran very well. It seems to be the right trip for him now and we'll see where we go from here.”

Charlie Appleby was keen to put Hurricane Lane's reversal in the context of his overall program and said, “We haven't hidden anything about what our thought processes are–we're working back from October, very much so. We feel Hurricane Lane is our Arc horse and, with the ground being as quick as it was, I said to William Buick 'don't forget, if it's not happening for him, look after him round there'. William said he travelled into it well, but his action just shortened a bit and he said he just went through his girths and just got tired. The ground was quick enough for him–he does move better when there's ease in the ground–we all know that. More importantly, he took on two match-fit horses as well. I'm pleased–you're just glad they've still got their enthusiasm.”

If Broome is this good at six, that bodes well for his 3-year-old full-brother Point Lonsdale (Ire) who has already garnered the G2 Futurity S., G3 Tyros S. and Listed Chesham S. here. The dam is the Listed National S. winner and GII Appalachian S. runner-up Sweepstake (Ire) (Acclamation {GB}), a daughter of Dust Flicker (GB) (Suave Dancer) who is a full-sister to the G3 Prix de la Nonette scorer Dust Dancer (GB). She is in turn the second dam of the G1 Phoenix S.-winning Zoffany (Ire) and the G3 Bengough S. winner Projection (GB), who shares Acclamation as a sire with Sweepstake. This is the Hesmonds Stud family of the G2 Premio Lydia Tesio winner Claxon (GB) (Caerleon), her GIII Hillsborough S.-winning and G1 Nassau S.-placed daughter Cassydora (GB) (Darshaan {GB}) and the likes of Ernest Hemingway (Ire) (Galileo {Ire}) and Frankel's Rostropovich (Ire) and Toulifaut (Ire). Sweepstake's unraced 2-year-old filly by Lope de Vega (Ire) is named Saadiyat (Ire) purchased by Al Shira'aa Farms for 475,000gns at the Tattersalls October Yearling Sale Book 1, while she also has a yearling colt by Frankel.

Ryan Moore that is brilliant! Broome wins the Hardwicke for Aidan O'Brien at #RoyalAscot #競馬 pic.twitter.com/18BVdGEfxg