Kalypso a Revelation in Santa Ynez 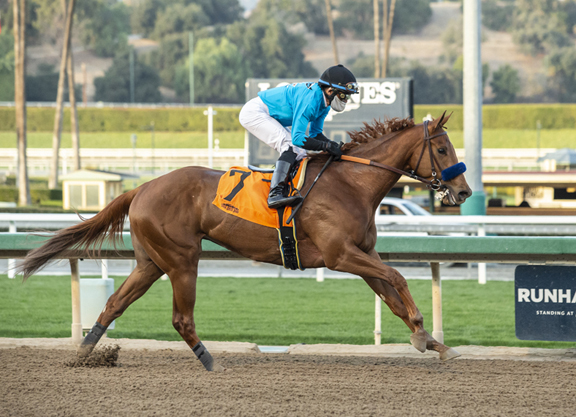 David Bernsen, Rockingham Ranch and Chad Littlefield's Kalypso (Brody's Cause), the 4-5 favorite, strode home an easy winner of the GII Santa Ynez S. at Santa Anita Sunday, becoming the second graded winner from the first crop of her Grade I-winning sire. Cutting back to seven furlongs following a runner-up effort behind her Santa Ynez-scratched stablemate Varda (Distorted Humor) in the 1 1/16-mile GI Starlet S. last month, the chestnut filly broke sharply and had the advantage in the early strides. But she was soon joined by Brilliant Cut (Speightstown) and those two rivals battled through fractions of :22.53 and :45.13. Kalypso took charge nearing the stretch and, once she found her best stride, powered away in the final furlong to finish 1 3/4 lengths in front under a hand ride as stablemate Frosteria (Frosted)–still a maiden–made late progress to be second for the fourth time in four lifetime starts. Brilliant Cut was third.

“She broke good and put me right into the race, in a good position,” said winning jockey Joel Rosario, who was riding Kalypso for the first time in the Santa Ynez. “I'm just happy to be on her. She was the best horse and she'll be better going longer distances.”

Kalypso provided trainer Bob Baffert with his record sixth win in the Santa Ynez a day after he got back on the Triple Crown trail with the one-two finishers–Life is Good (Into Mischief) and Medina Spirit (Protonico)–in Saturday's GIII Sham S.

“She has natural speed and she's a really fast filly,” Baffert said of Kalypso, who was one of three fillies he saddled in the Santa Ynez. “She had the lead for a long time in the [Starlet], backing up, it's a big difference to go seven-eighths. The way she broke today, she was in a good spot and she was really training well coming into this race, so it's pretty exciting that she got a win.”

Kalypso opened her career with a third-place effort going 5 1/2 furlongs at Del Mar Aug. 15 and was second at that track and trip Sept. 5 before breaking her maiden going six furlongs in the Oct. 18 Anoakia S. She had a 2 1/2-length advantage in upper stretch before being overtaken by Varda in the 1 1/16-mile GI Starlet S. at Los Alamitos last time out Dec. 5 and was shedding the blinkers for this second graded stakes attempt.

“I would try her long again, as they get older they are maturing,” Baffert said of future plans for Kalypso. “You can slow her down a little bit, like today she was pretty relaxed. She wasn't too rank where she went real fast, but we'll just see how they come out of it. The other filly [Frosteria], I think I'll just run her in a maiden race.”

Malibu Cove, a full-sister to multiple graded winner Prospective, produced a filly by Hit It a Bomb in 2019 and a colt by Mor Spirit in 2020. She was bred back to Jimmy Creed. The mare is also a full to Enhanced, who produced last year's GIII Bashford Manor S. third-place finisher Herd Immunity (Union Rags).