‘Brody’ Bounces Back in Blue Grass 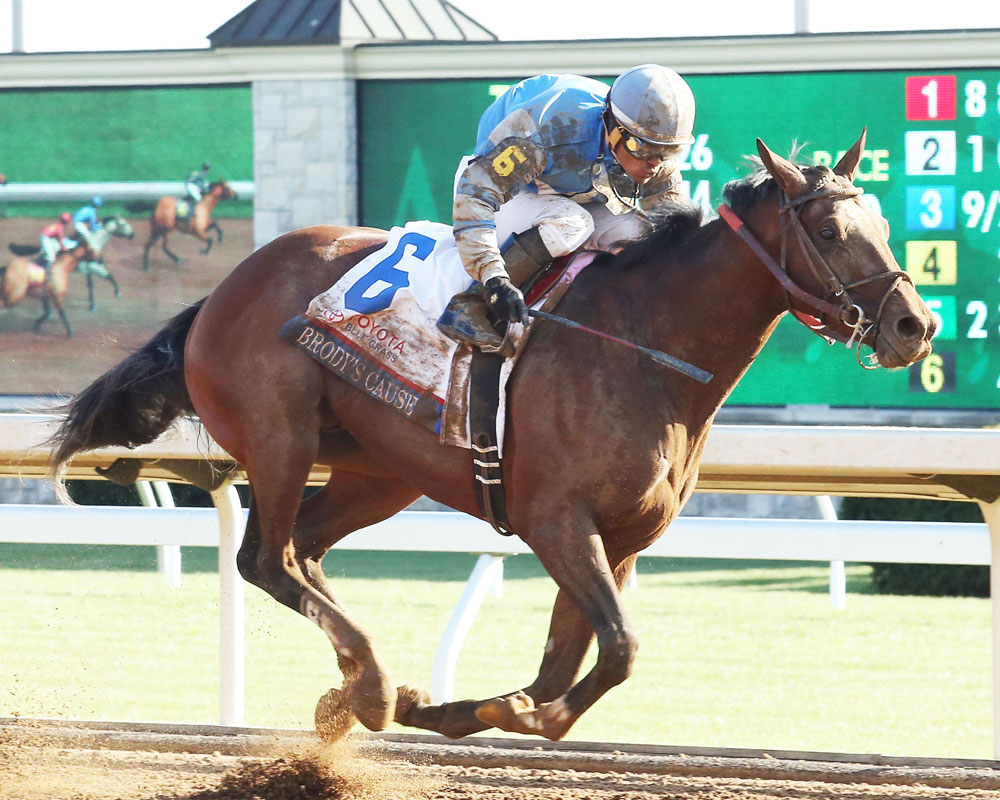 The Dale Romans-trained Dullahan (Even the Score) made some history in 2011, winning that year’s GI Toyota Blue Grass after scoring in the GI Breeders’ Futurity the previous fall. It was deja vu all over again on a crisp early-spring afternoon Saturday, as Brody’s Cause (Giant’s Causeway) repeated the feat with an off-the-pace victory.

Brody’s Cause’s debut over the Ellis Park turf course Aug. 1 was an unmitigated disaster, as he was beaten better than 25 lengths at 3-1, but he turned it around in no uncertain terms in his next, posting a fast-finishing 1 1/4-length success beneath the Twin Spires Sept. 11. An 11-1 chance in the Breeders’ Futurity over a muddy Keeneland strip Oct. 3, the $350,000 Keeneland September purchased raced last but one behind a searching pace, but came with another flying stretch run to defeat Saturday’s GI Santa Anita Derby hero Exaggerator (Curlin) by a length. The 6-1 fourth choice against Nyquist and others in the GI Breeders’ Cup Juvenile Oct. 31, Brody’s Cause closed off well, but could do no better than third before getting the rest of the year off. He was favored against the likes of Destin (Giant’s Causeway) and Outwork (Uncle Mo) in the GII Tampa Bay Derby, he ran no sort of race whatsoever and finished a puzzling seventh. Trainer Dale Romans was willing to draw a line through it, saying earlier this week that he’d never had a horse train so well to run so poorly in a race. He would get his bounceback chance as the second wagering choice Saturday behind TDN Rising Star Zulu (Bernardini), the GI Florida Derby runner-up.

With Corey Lanerie opting for stablemate Cherry Wine, it was Luis Saez in the irons atop Brody’s Cause and he dropped the bridle early and was switched off nicely near the back of the field as the maiden Laoban (Uncle Mo), runner-up in the GIII Gotham S. last time, set a reasonably quick pace in advance of the stretching-out Twizz (Twirling Candy). Subtle though it was, Saez allowed Brody’s Cause to creep up one spot, but it proved a crucial decision, as it gave him the slightest tactical advantage over fellow back-markers Cherry Wine and My Man Sam, recent runner-up to GI Wood Memorial favorite Matt King Coal (Cool Coal Man). Given his cue rounding the far turn, Brody’s Cause produced an exceptional turn of foot, knifing between and catapulting past rivals to be within shouting distance of the pacesetting Laoban turning for home. Still with some work to do and with Cherry Wine and My Man Sam in I-formation behind him, Brody’s Cause hit the front traveling strongly with a furlong to race and held sway late, as My Man Sam was just able to spoil a Romans 1-2 finish.

“He broke sharp. He was in a good spot,” recalled Saez. “On the first turn, he got in a little trouble; I had to check a little. But that was good because he came out [at the five-eighths pole], and we were in the clear. He was rolling. He was asking me to let him go and I let him go. When we came to the stretch I knew he would be there.”

The winner’s dam, a daughter of 1989 GI Breeders’ Cup Juvenile Fillies heroine Sweet Roberta (Roberto), was purchased by Foxtale Farm for $125,000 in foal to Congrats at the 2011 Keeneland November sale. Brody’s Cause is kin to a 2-year-old Arch filly named Bold Breanna and a yearling filly by Uncle Mo. Sweet Breanna is presently carrying a foal from the final crop of Scat Daddy.