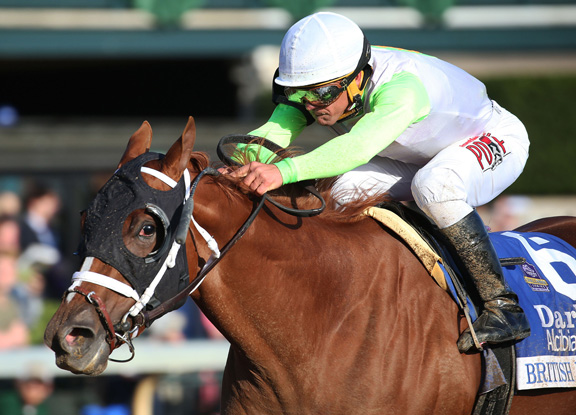 British Idiom (Flashback), last year's champion 2-year-old filly, has been sidelined by a chip in her right front ankle and has been sent to WinStar Farm for 60 days of recuperation, co-owner Sol Kumin confirmed Sunday. The story was first reported by Blood-Horse.

Owned by Kumin's Madaket Stables, Michael Dubb and Stuart Grant's The Elkstone Group and trained by Brad Cox, British Idiom won last year's GI Darley Alcibiades S. at Keeneland and the GI Breeders' Cup Juvenile Fillies at Santa Anita. She was second behind Finite (Munnings) while making her sophomore debut in the Feb. 15 GII Rachel Alexandra S. at Fair Grounds, but was never a factor when 10th in the May 1 GIII Fantasy S. last time out at Oaklawn Park.

“She came out of the race a little off and obviously she didn't run her race at Oaklawn, so we sent her to Dr. [Larry] Bramlage [at the Rood & Riddle Equine Hospital] to check her out,” Kumin said. “She will need 60 days or so and we will bring her back.”

While one champion is sidelined, Kumin and partners are looking forward to the return of another champion. Monomoy Girl (Tapizar), sidelined since winning the 2018 GI Breeders' Cup Distaff and earning that year's champion 3-year-old filly honors, worked five furlongs in :59.40 (3/16) at Keeneland Saturday.

“Monomoy Girl is getting very close to running,” Kumin said. “We hope to run her at Churchill. It's been a long road, so we are all very excited to see her back in action.”