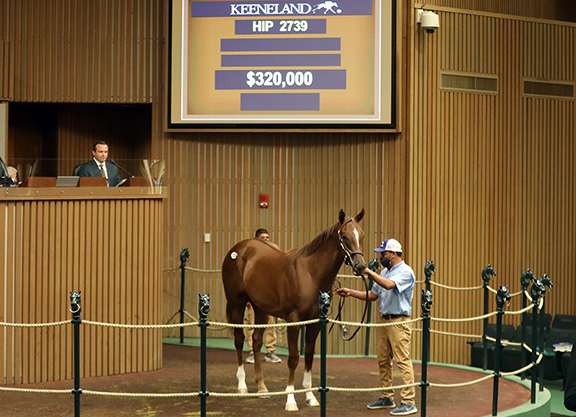 The two-session Book 4 portion of the Keeneland September Yearling Sale concluded Monday in Lexington with spirited action at the top of the market. Bloodstock agent Donato Lanni, the most prolific buyer of the auction, made the day's highest bid when going to $320,000 to acquire a colt by hot freshman sire Not This Time (hip 2739) for an undisclosed client. For the session, 255 yearlings sold for $11,832,500 for an average of $46,402 and a median of $25,000. The buy-back rate, which was as high as 40% during sessions last week, was 23.88% Monday.

“The good ones are tough to buy, they are really tough,” Lanni said. “You just have to bid extra and push a little bit more and hopefully you get them.”

Hip 2739 was one of two yearlings to bring over $300,000 Monday. The chestnut colt, bred by Stelly Stables and consigned by Stuart Morris, is out of Ready at Nine (More Than Ready) and is a half-brother to stakes-placed Drummer Boy (Parading).

“He is a neat horse, a cool dude,” Lanni said of the yearling, who will be trained by Bob Baffert. “He was one of the standouts today. Every day there are good horses coming through, you just have to find them. He was easy to find. He's a nice horse. And the sire helped. The sire has been on a roll and people believe in the sire. They are willing to pay extra for them. Not This Time is a horse that came under the radar. You never know who is going to make it, but it looks like he's going to do well.”

Also topping the $300,000 mark Monday was a filly by Nyquist (hip 2419), who sold for $305,000 to Nicoma Bloodstock. Consigned by Candy Meadows Sales, the yearling was one of five by the GI Kentucky Derby-winning freshman sire to bring six figures during the session.

“I think yesterday was a little light, but the quality of horses is a bit better today in day two of Book 4 and there certainly seems to be a little more high-end trade today,” said Nicoma's Ben Gowans.

Oracle Bloodstock, bidding on behalf of Zilla Racing Stables, struck late in the day to acquire one of three fillies by Nyquist to sell for $200,000 Monday. Hip 2772 is out of Soarwiththebirds (Giant's Causeway), a half-sister to Canadian champion Up With the Birds (Stormy Atlantic), who was consigned by Taylor Made Sales Agency.

“I loved her,” said Oracle's Conor Foley. “She had a coltish body, but a feminine way about her. I don't think she's done improving. I thought she fit the mold of the nice Nyquists. I'm excited that Zilla Racing was able to get her. This was their first time to Keeneland and they were the underbidder several times over the last several days and we just decided this filly ticked all the boxes. We were lucky to get her.”

Of Nyquist, who was represented by his second Grade I winner when Gretzky the Great won the GI Summer S. at Woodine Sunday, Foley said, “I'm really impressed with them. Obviously they are showing themselves to be the real deal on the track. The Grade I win maybe cost my client a little bit more money than I would have liked, but I am happy for Darley that they stand the horse. I used to work there and I'm a big fan of the stallion.”

Oracle Bloodstock has been active at all levels of the market during the first week of the Keeneland September sale, purchasing horses from $1.1 million to $15,000. In all, the operation has signed for 19 yearlings for $3,534,000.

“I am shocked at how strong the market is with everything that is going on in the world,” Foley admitted. “It's been punishing because I've been outbid a lot. There is still a strong desire for people to get really nice horses to compete all over the world. I still have barely even bought for my foreign clients. I am nervous–I would be shocked if I was going to be able to fill all their needs at this sale. But that's great for everybody in the business. It's been a weird year, but I'm relieved for the breeders. They need to do well, they are the synergy and the strength of our industry.”

A day after earning his second Grade I winner from his first crop to race, Nyquist was responsible for the top-priced filly of Monday's eighth session of the Keeneland September sale when Nicoma Bloodstock's Ben Gowans made a final bid of $305,000 to secure a daughter of the GI Kentucky Derby winner (hip 2419) on behalf of an undisclosed client. Out of multiple stakes winner and multiple graded stakes placed Unforgotten (Northern Afleet), the bay filly is a half-sister to Grade I placed Silverpocketsfull (Indian Charlie).

“Seeing what Nyquist has done so far obviously gave us the confidence in the filly, but we loved her physically,” Gowans said. “She is a beautiful filly with good size, plenty of leg, really well balanced, and she moves really well.”

Of his client, Gowans said, “He is in it to race. We've really enjoyed working for him and he was delighted even though we went a little over [budget on the filly]. So that's always a good thing.”

The yearling was consigned by Candy Meadows Sales and was bred by Matt Lyons's Three Lyons Racing and Dennis Farkas. Farkas purchased Unforgotten, with this filly in utero, for $75,000 at the 2018 Keeneland November sale.

“Matt [Lyons] was the one who got me going on the mare a couple of years ago,” Farkas said from his home in Indiana. “I really liked her, but she was out of my price range and when she RNA'd in November, Matt asked me if I wanted to go partners on her. I said, 'Sure.' After that, it's been all Matt.”

Of Monday's results in the sales ring, Farkas said, “Matt was really happy with the way the filly had grown and thought we would do ok with her. He had high expectations, I don't know if he thought we'd be the sale topper today, but he was very happy and I am, too.”

Unforgotten, who produced a filly by West Coast this year, is Farkas's only Kentucky-based mare, but he has a band of some 10 mares in Indiana.

“Ian Wilkes trained [2012 GII Indiana Derby winner] Neck 'n Neck and we ended up getting him back and we brought him up here to Indiana to stand stud,” Farkas said. “I bought five or six mares to breed to him, but toward the end of the breeding season, he got off a mare and kicked the wall and shattered his leg. So my dream of standing a stallion in Indiana ended. It's pretty costly to take as many mares as I have right now, which is 10, to take them all to Kentucky and get them in foal and bring them back. So I have four I am going to sell in November. But we have some really nice Indiana-bred foals born this year. I have a Maclean's Music, a Good Magic and a Practical Joke and I ended up getting five Neck 'n Neck babies, all fillies. And they are good looking, so we're really happy with that.

He continued, “They have the Indiana-sired program here. They can run against only Indiana-sired horses, which is a big advantage. It's a great program and I'm leaning towards just staying with that for a little bit.”

Filly a First for Hernon Bloodstock

Michael Hernon, longtime director of sales at Gainesway, made the first purchase for his new bloodstock agency Monday at Keeneland, going to $42,000 to acquire a filly by Speightster (hip 2541) on behalf of Steve and Cynthia Sansone.

“This filly jumped out at me with her motion and she had a very good stride to her,” said Hernon, who partnered with trainer Mark Casse to purchase unbeaten stakes winner Spanish Loveaffair (Karakontie {Jpn}) for $35,000 out of last year's September sale. “I looked at her three times and she's a very positive type who moves forward willingly.”

The yearling is out of Diamondsandcaviar (Street Cry {Ire}), a half-sister to Grade I winner Haynesfield (Speightstown).

Hernon made his first purchase under the Michael Hernon Bloodstock banner on a single bid.

“I could have seen her bringing $50,000 and change,” Hernon said. “But we are happy with the price and we're happy with the horse. She was the first one on our list to come up, I have a couple of other fillies to go through today and we have a short list for tomorrow, so we'll see how it plays out.”