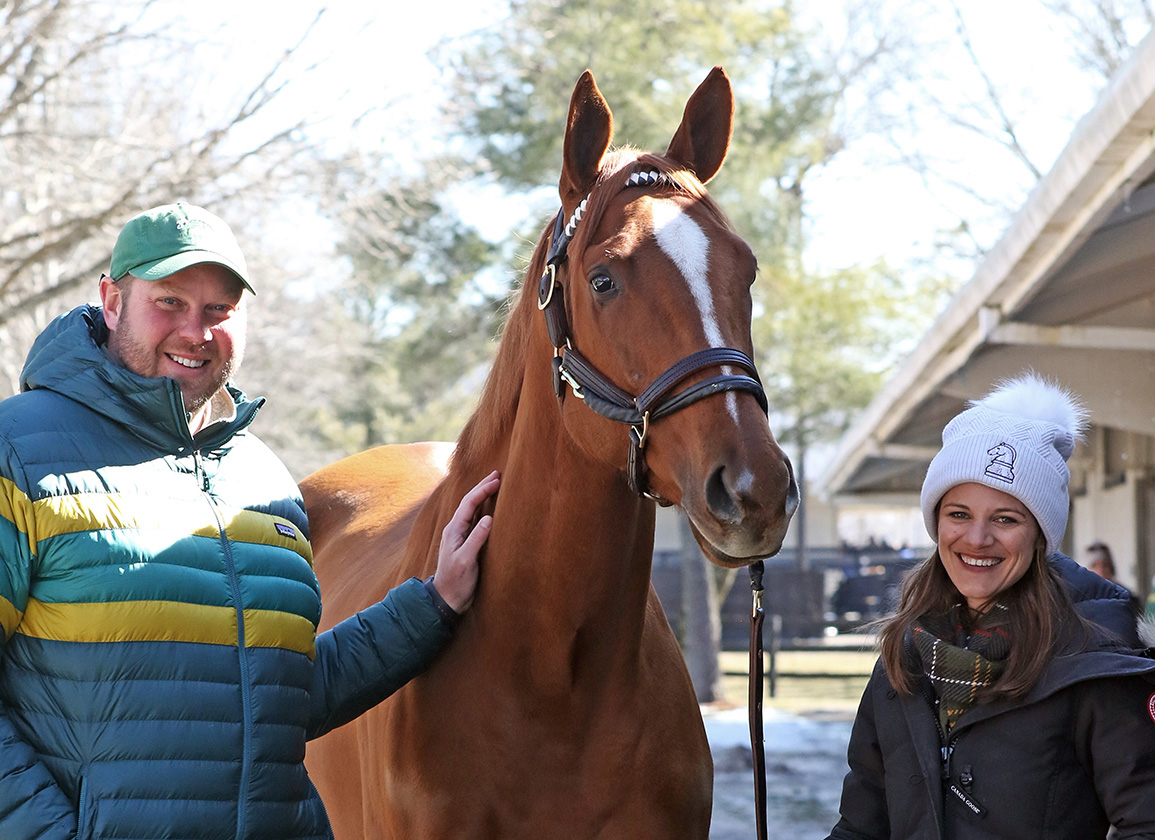 LEXINGTON, KY–Recent GI La Brea S. runner-up Brilliant Cut (Speightstown) (hip 541) was as popular as many expected her to be, topping the Fasig-Tipton Winter Mixed Sale at $750,000. Japan's Katsumi Yoshida was the winning bidder over the internet.

“Tremendous horse sale,” Fasig-Tipton President Boyd Browning said. “There was great activity on all types and levels of horses, unlike a few years ago when it was all or nothing at the top. The encouraging thing was the depth of the marketplace for yearlings, racing/broodmare prospects and mares in foal. People had money to spend and orders to fill. There was a tremendous clearance rate. From our perspective, February has clearly established itself as a meaningful sale on the calendar that people should point horses to the in the future.”

In addition to the sale-topping Brilliant Cut, Japanese buyers also took home Tuesday's top purchase, and the second highest-priced offering of the sale, Bodhicitta (GB) (Showcasing {GB}), who brought $450,000 from K I Farm.

Fred Hertrich, John Fielding and City of Light were responsible for the session-topping yearling for the second day in a row, selling a $180,000 colt by that young Lane's End stallion. Rob Tribbett was also a co-breeder on hip 337, who was purchased by Four Star Sales. The breeders sold a $260,000 colt by that sire Tuesday, who was the auction's top-priced yearling.

Champion freshman sire Gun Runner continued to make a strong showing at Fasig, with two more mares in foal to the Horse of the Year bringing six-figures. The Three Chimneys resident was represented by three other six-figure sellers Tuesday, one yearling and two in-foal mares, all of which were sold by Pennsylvania-based owner/breeder Christian Black.

There was a deep buying bench at the February sale, with the top 12 horses all going to different buyers. On the seller end, Taylor Made accounted for seven of those 12.

“It is strong,” West said. “I had orders to try to buy everything from yearlings to maidens to pregnant mares and I bought one horse. There are quality horses in here and they have been selling well across the board. The results speak for themselves with the median and average from [Tuesday] and the gross total. Today I am sure they are blowing it out of the water. Quality products are bringing quality money and it looks like it is going to be that way for the foreseeable future.”

The Fasig-Tipton Winter Mixed Sale marks the end of the breeding stock sales season and the auction scene will transition to Florida with the OBS March Sale, which is quickly followed by Fasig-Tipton's Gulfstream Sale.

Highgate Sales Off to 'Brilliant' Start

Jill Gordon and Jacob West's Highgate Sales came out of the gate running with their inaugural consignment, selling all 10 of its mares, including $750,000 sale topper Brilliant Cut (Speightstown) (hip 541). The GI La Brea S. runner-up was purchased by Japan's Katsumi Yoshida, who did his bidding online.

“To roll out our banner for the first time and be able to have a sale topper here at the Fasig-Tipton Winter Mixed Sale, it's hard to put into words,” said Gordon, the emotion clear in her voice. “We have the utmost gratitude to this ownership group. They have been very good to me and I can't possibly say thank you enough for what they've done for us. This filly has been a class act from the day she got to the sales grounds. She was out over 150 times and gave the exact same show every time she was out of her stall. We are so proud to have represented her and followed her up to the ring.”

Brilliant Cut was claimed by trainer Doug O'Neill and owners Boom Racing, ERJ Racing, Dave Kenney and William Strauss for $50,000 out of her fourth-out graduation at Del Mar in November of 2020. The chestnut was third behind La Brea heroine Kalypso (Brody's Cause) in last term's GII Santa Ynez S. and checked in fourth in the GIII Las Virgenes S. Switched to the grass, she completed the exacta in an Arcadia optional claimer last March, after which she was sent to the sidelines.

Resurfacing in the Unzip Me S. on the Santa Anita lawn in October, Brilliant Cut checked in fourth that day and was sent back to the main track, where she returned to winning ways in an Oct. 30 starter optional claimer. Dismissed at 20-1 when jumping up the class ladder for the Dec. 26 La Brea, Brilliant Cut pressed from second most of the way and stayed on to fill the place spot.

Brilliant Cut has the pedigree to back up her track record, starting with her year-younger half-sister Lemeiux (Nyquist), who won a stakes last year at two and is back in training. Her dam is a half to MGISW Diamondrella (GB) (Rock of Gibraltar {Ire}), who is the dam of GSW Spectropscope (Medaglia d'Oro); SW Highest Honors (Tapit); and SW & MGISP Bonnie Blue Flag (Mineshaft), who is the second dam of GI Breeders' Cup Dirt Mile romper and impressive GI Pegasus World Cup winner Life is Good (Into Mischief).

“Given the interest that we had in here both pre-sale and on the sales grounds, we were hoping she might get to $500,000 or a little more,” Gordon said. “To walk up and have a result like this, especially off of a $50,000 claim, it's hard to describe.”

Highgate's initial consignment consisted of a mix of 10 in-foal mares and racing/broodmare prospects. They had a 100% clearance rate with a gross of $1.216 million and an average of $121,600.

“We are pleased to report that we went 10-for-10 at our inaugural sale,” Gordon said. “We had a great group of clients supporting us and we can't thank them enough. It couldn't be a better way to start and we are both very excited.”

West added, “Jill has really taken the bull by the horns here. We wanted to come in here with some quality product and make our presence felt. She spearheaded all of that and I couldn't be happier for her. I know how much blood, sweat and tears went into this. I am happy for her and our whole team. The guys at the barn were incredible. We wouldn't be anything without our clients and the horses they gave us.”

Bloodstock agent David Meah had two fillies in mind for the partnership of Bing Bush's Abbondanza Racing and Omar Aldabbagh. He decided to focus his efforts on recent stakes winner Lady Edith (Street Boss) (hip 350) and that paid off early in Wednesday's session when he secured the 4-year-old filly for $370,000. She will be sent to California-based conditioner and Meah's former boss Richard Baltas.

“This was the one filly that we knew we could probably afford,” Meah said. “The other one [we were looking at] was [GISP] Brilliant Cut (Speightstown), but we know she is probably going to go for a lot of money. So, we focused in on this filly. With Santa Anita racing from five to 6 1/2 furlongs on the grass now, it gives us a lot of options. We think she can go over there and probably pick up some graded stakes wins, hopefully. She will run all year and then they will decide whether they want to bring her back here in November to sell again or, since she just turned four, they may run her for a couple of years.”

Bred by the late J. David Richardson and Sandra New, Lady Edith was consigned by Hermitage Farm, acting as agent for Richardson's estate. Out of stakes winner Lady Grantham (Yankee Gentleman), she captured the Mamzelle S. sprinting on turf at Churchill Downs in May and came from the clouds to take the Wishing Well S. on synthetic at Turfway Jan. 29 for trainer Tom Drury.

“She has the pedigree where she is worth quite a bit of money as she stands, even if she never ran again,” Meah said of the filly's appeal. “She just turned four and just won a stakes race at Turfway. Horses don't generally come from off the pace there and she was 14 lengths back after about 25 jumps, so she did it really well. She swung five or six wide in the stretch, mowed them down and galloped out pretty well. That last race sealed the deal for us. It showed she has a big turn of foot. They just don't come from that far back at Turfway. We are excited to get her on the grass in California. Horses with a turn of foot like that really do well there.”

Owner/breeder Christian Black has enjoyed plenty of success in the sales ring over the past six months thanks to leading freshman sire Gun Runner. The principal of Blackstone Farm and Forgotten Land Investments sold a colt by that Horse of the Year for $550,000 at Fasig-Tipton's Saratoga sale. The duo continued to succeed at the February sale when Black sold a Gun Runner filly for $225,000 (hip 38) and a pair of six-figure mares in foal to the Three Chimneys stallion during Tuesday's session.

“I have always been a big fan of Gun Runner,” Black said. “I have been breeding to him from the first year. Three Chimneys has been very, very nice to me and always let me do what I thought was the right thing to do. They have been very supportive and I am very appreciative of that.”

The first of the two to go through the ring Wednesday was Lucky Draw (Lookin At Lucky) (hip 369), who never made the races, but is a half to stakes winner Killer Bird (Summer Bird). Black picked up the now 7-year-old mare for just $10,000 at the 2018 KEEJAN sale. He kept her first foal, the recently turned 3-year-old filly You Look Cold (Frosted), and races her in partnership with Kinsman Stable. She has won two of her four starts, including the Finest City S. at Presque Isle in September, with lifetime earnings just shy of $100,000 thus far. Black sold her 2020 filly by More Than Ready for $100,000 at FTKOCT and she had a More Than Ready colt last April.

“We were lucky enough that the first foal out of her became a stakes winner,” Black said. “That filly just turned three. She will go on and be a stakes horse this year hopefully, and maybe even a graded stakes horse. She is a young mare with a lot of upside to her, so I think people saw that and were willing to put a value on her that reflected that.”

The second mare is a Blackstone Farm homebred, Malibu Surprise (Malibu Moon) (hip 377). Out of the Ghostzapper mare I'm Surprised, she is a half to stakes winner She's a Big Winner (Bellamy Road). The 7-year-old mare's first foal is a now-yearling colt by Distorted Humor.

“She was born on a Southern Hemisphere season,” Black said. “I always liked the mare. We raised her and she was a decent racehorse. The Gun Runner was in her and I thought that was a good physical match, so we brought her to market and were rewarded. Gun Runner and Three Chimneys have been very good to us. That's for sure.”