Home » Archive » Shared News » Brennan: We Can't Turn Back the Clock, but Let's Not Depend On It

Brennan: We Can't Turn Back the Clock, but Let's Not Depend On It 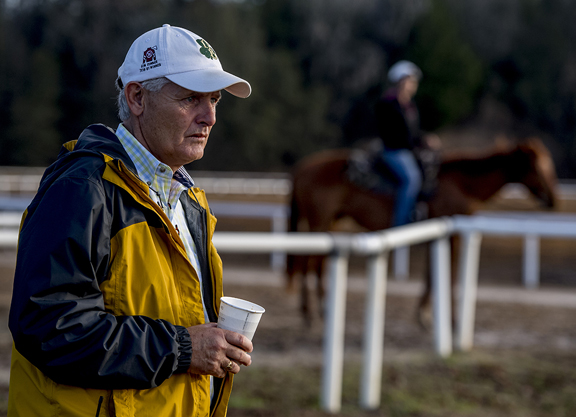 When a man has done as much for the format as Niall Brennan, it surely behooves anyone returning to the 2-year-old sales this spring to pay heed to his disenchantment with certain trends that will very likely continue at OBS next week–above all, with the market's credulous enslavement by the stopwatch.

Year after year, the Ocala horseman's dexterity in educating a young Thoroughbred is freshly advertised: latterly by Horse of the Year Gun Runner (Candy Ride {Arg}), who emerged from the same intake as Nyquist (Uncle Mo)–Brennan's second Kentucky Derby winner in four years, following Orb (Malibu Moon). Already in 2018, graduates of the Irishman's operation to have been making headlines include leading sophomores of either sex in Avery Island (Street Sense) and Fly So High (Malibu Moon).

The latter pair were both sent to Brennan by their owners, respectively as a homebred and a yearling purchase, to benefit from his pre-training program. As such, they belong to a division that Brennan finds increasingly fulfilling. Though he remained in the top five consignors at 2-year-old auctions last year, as has been routinely the case since 2000, he admits that so much of the nuance has gone out of the sales ring that he is inclined somewhat to scale back that side of his business.

“Breeze-up sales have changed dramatically over the years, even in the last five or six,” he says. “It's not as much fun anymore. Before, the horses were really developing within themselves. They didn't have to go flat out. Now they have to go on their head, flat out, bust themselves. Which is stupid. Because they never have to do it again. But that's the way it is. We've created the monster and we can't go back now.”

As others have become ever more obsessed by “bullet” times, Brennan has remained faithful to his principles. It makes long-term commercial sense, after all, for his customers to see that his graduates will continue progressing on the track–much as Gun Runner did, for instance, or Palace Malice (Curlin), another Brennan graduate who added a GI Met Mile at four to his GI Belmont S. success–in contrast with the implosion of other horses prepped to do powder-keg breezes.

“We never let them go full speed here on the farm,” he says. “A lot of other consignors are more into Quarter Horse training methods: they breeze half a furlong, flat out, and then pull them right up. That way, I feel, you're not really helping to develop a Thoroughbred racehorse. But each to their own. At the end of the day I've just had to make a decision–and that was to rest on my reputation, on our ability to develop racehorses. And to hope that keeps people coming back to buy from us.”

Not that he sees much evidence of market wariness regarding the mental and physical wear-and-tear associated with gunning young horses for a hot time at the sale. He accepts that we cannot, so to speak, turn back the clock. And he understands the appeal of the boot camp approach: after all, the whole point of the format is to show a youngster being put through his paces, as opposed to merely strolling up and down at a yearling sale. And he also trusts the seasoned, core clientele to know what they should be looking for–much as they, in turn, know which consignors to trust.

But while certain consignors can be reliably expected to produce rocket times, sale after sale, their record in producing racehorses is not necessarily so consistent. Even so, the one-dimensional “bullets” continue to fetch big money.

“The average buyer still looks at that time and can't get past it,” Brennan says. “Every year people gravitate back to those fast horses, they can't help themselves. They go back to the barn, they see a good-looking horse, and they're buying. But the results speak for themselves. They don't buy racehorses that way.

“It's a paradox, really. Because the horses are ridden so fast, scrambling against the clock, that you're not seeing them in their natural rhythm; they're not held together; you're not seeing their real, true movement. Which is the whole virtue of the 2-year-old sale, the chance to see how they move.”

Brennan wants people to think about this fleeting shop window just as a snapshot of a horse's long-term development; and to remember how that snapshot will often be too blurred, in hurtling an eighth of a mile, to measure a horse's full potential. That's where trust comes into it.

“I could have a horse I think very average: he's fast, but he has no class, he's just a horse,” Brennan explains. “And then there'll be one I love, one I think is a really good type. And he'll breeze nice–but the faster one will go :10 flat. Now if you breeze in :10 2/5 these days, you're almost on the bubble a little bit, which is completely ridiculous. But if there's a bunch of nine-and-changes, and :10 flats, then :10 2/5 is starting to look kind of slow.

“So I'll have this really nice horse that goes :10 2/5, and I'll find myself standing there at the barn and–while he might have made lists–they'll all be saying to me: 'Niall, I love that horse… But he went kind of slow, didn't he? But this other horse, he looks really good; he's fast, isn't he?' And you'll get to the point where you can't talk them out of the bad horse; and can't talk them into the good horse. Because they're mesmerised, they're hypnotised by the clock.”

To be reliably candid about your consignment should, of course, ultimately make better commercial sense anyway. For when people see Brennan's judgement subsequently vindicated on the racetrack, year after year, by rights they should listen more closely next time. After all, the combination of honesty and experience in such a proven operator surely counts for rather more than our own, casual 10-second viewings of an adolescent horse. Yet Brennan feels that even some of those he can help see through a horse of fraudulent speed will still resist his assurances that another one is better than might be superficially apparent from a breeze.

Faith in times is now so literal that many a catalog will notoriously be decimated by withdrawals after the breeze show. “I'm afraid everybody's doing that now, because those sales are all or nothing,” Brennan says. “You have a horse you believe in, and he just had a flat day or swapped his lead a bit wrong, you don't have the play and you'll get 30 cents on the dollar if you go to the ring. And you know this horse is way better than that.

“So a lot of people just roll the dice and wait for another day. But I try to make that call very carefully, those last two weeks before the sale. If a horse isn't thriving, I'll just scratch–because once they're over there, the stress means they'll only go downhill. If they're getting antsy, or backing off their feed, or just not looking happy, you're kidding yourself if you think they're going to go over there and shine. So I'd prefer to give them the chance to regroup for a later sale.”

Market trends have also required Brennan to adjust his filter for the type of yearling eligible for a pinhook. Years ago, he recalls going against the tide to invest in the first crop of Dynaformer (Roberto).

“People said they were giraffes, but we believe good horses come in every shape and size,” he says. “And I think three of his first four stakes winners were horses we had. But you wouldn't buy them for a 2-year-old sale today. They were two-turn grass horses, so you wouldn't get away with it. Whereas in those days we would.”

That herd mentality finds expression in increasing polarisation both at yearling auctions, where Brennan and his partner Mike Ryan go prospecting for pinhooks, and in the resale market at two. Yes, the headline lots remain spectacular, but they don't represent the real pith of the market.

“If you do get one that sells huge, that takes the pressure off your group, off your investors,” Brennan admits. “Because if you've got the breeze and the heart scan and the clean vet work and the geneticist and all the rest of it lined up, prices can get stupid. But often people spending big just want to buy what they're told is supposed to be the best. There's as much ego as evaluation. And that's where you get the polarisation.”

In the same way, the middle ground has fallen away in the profile of the purchasers themselves.

“These days it tends to be either the very wealthy or the syndicates,” he says. “And that's been at the expense of, say, the accountant and lawyer and small business owner who team up and buy three or four at a hundred grand apiece. They're gone now. When the economy was bad, we lost those middle players and they've not really come back in. That's not good for the game.

“Syndicates are great, people can get their toe wet without great exposure, but they're not getting a lot of the fun that keeps you in the game: bringing your kids to the barn, watching them train, going for breakfast. That's how you really appreciate the game, how you really want to play it. You ask Bob Edwards or Sol Kumin, new players to the game: because they're the guys out there with the golf buggy every morning at Saratoga, involving the family, and they'll tell you that's where they gets as much fun as at the races.”

Make no mistake, Brennan still believes passionately in the product; still sees huge benefits in the 2-year-old sale concept. He will parade his consignments this spring with all his usual professional pride, and history virtually guarantees that there will be a champion or two in their midst. By the same token, everyone should sit up and take notice when a multiple number one consignor is so dismayed by trends within a market that owes so much of its credibility to his own skill.

“Even though I don't enjoy these sales quite as much as I did, we're very fortunate in our clients,” he stresses. “And that includes clients with horses not for sale. At least half our program now is developing horses for racing, and they go to the races on our schedule. So it's fun, it's a good balance. And no question, the 2-year-old medium remains a great vehicle in general.

“I have tried to find a happy medium. We obviously have to go over there and have them ready to show. But at the same time I'm trying not to beat them up. Whatever the bullet is, we won't be there because we don't train them to do that. The goal is to have them sound and healthy and fit enough to go over there and run sharp.

“Because if they know their job, when you do turn them loose, they're going to run. That's what they're bred to do. We just try to make sure that when they have to run for the first time, they know what to do. But we keep in mind it's the races down the road that really matter. It's not supposed their Oaks or Derby day.”