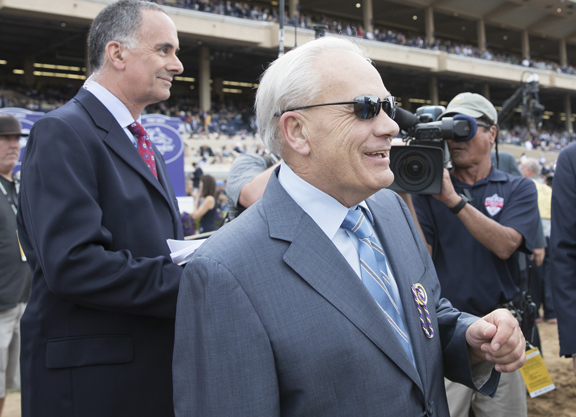 Officials at Breeders' Cup Limited have announced that they will not allow trainer Jerry Hollendorfer to participate in this year's World Championships at Santa Anita, keeping with The Stronach Group's ban on him racing horses under his name at the Arcadia oval and its other properties.

The following statement was released Friday:

“Breeders' Cup leads by example in the conduct of Thoroughbred racing at the highest levels of safety and integrity for its athletes. We have partnered with Santa Anita to implement extensive reforms related to medication practices, testing protocols, veterinary exams, injury management, onsite requirements and racing surface testing in preparation for the 2019 World Championships. Earlier this year, The Stronach Group made the decision to prohibit Jerry Hollendorfer from participating at all TSG-owned tracks, including Santa Anita. As announced by the Chairman of the Board, Fred Hertrich, and consistent with Santa Anita's position as host of this year's World Championships, we will honor their house rule and Jerry Hollendorfer will not be permitted to enter horses at this year's event.”

“We just found out within the last half hour what the decision will be. Obviously, it's disappointing and devastating news,” Hollenderfor's attorney, Drew Couto, said Friday. “He's exceedingly disappointed. He did not see it coming.”

Couto said that he was unable at this time to publicly speculate as to what might happen to the horses Hollendorfer intended to run under his name at the Breeders' Cup.

“As one might imagine, there are many moving pieces, and so, we need to sit down, calmly digest everything that has gone on, and take whatever steps are necessary so that Jerry's clients are not unnecessarily and inadvertently penalized as a result of the Breeders' Cup's decision,” Couto said.

The decision of the Breeders' Cup, Couto added, is the consequence of a “flawed process,” in that the trainer has yet to receive the “due process” afforded him legally.

Indeed, in court filings prior to Wednesday's hearing at the Los Angeles Superior Court, representatives for TSG argued that Hollendorfer has been given “the provision of Fair Procedure” at a meeting at Santa Anita Sept. 12 attended by Hollendorfer and his legal team, along with representatives from TSG and the California Thoroughbred Trainers.

Hollendorfer's position, Couto told the TDN Wednesday, is that the September meeting doesn't constitute “fair procedure” because it didn't occur before the trainer was barred from Santa Anita's grounds in June.

“This is why we have been so devoted to the notion of fair process and procedure,” Couto explained Friday. “It hasn't occurred yet, and this is the consequence of it. Unfortunately. It's punitive on Jerry, and it's punitive on his clients, and it's a black eye for the industry. Terrible.”